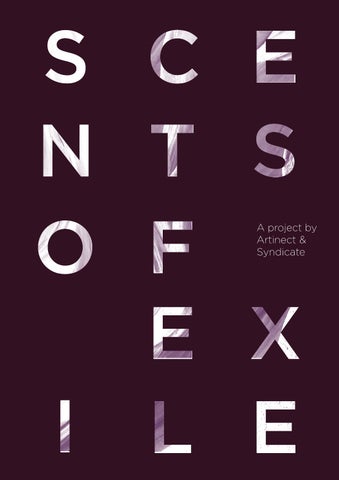 Cities are scents: Acre is the scent of marine iodine and spices; Haifa, the scent of pine and rumpled sheets; Moscow, the scent of vodka on ice; Cairo, the scent of mango and ginger; Beirut, the scent of sun, sea, smoke, and lemon; Paris, the scent of fresh bread, cheese, and the derivatives of intrigue; Damascus, the scent of jasmine and dried fruits; Tunis, the scent of night musk and salt; and Rabat is the scent of henna, incense, and honey. And every city not known for its scent is not worth mentioning. And lands of exile have a common scent, which is that of longing for elsewhere… A scent remembering another, a scent of intermittent breaths, emotional, leading you like a tourist map that’s been used too often to lead to the scent of the first place. Scent is a memory and a sunset. And sunset, here, is beauty’s rebuke to the foreigner.” Mahmoud Darwish, “In the Presence of Absence” excerpt (translated by Ashraf Osman)

«Scents of Exile» is an olfactory art project that investigates the memory, identity and nostalgia of scents associated with cities and places no longer accessible. It takes as its point of departure the above text by prominent Arab poet Mahmoud Darwish. The project aims to: • raise awareness of olfactory art as an emerging area of contemporary artistic practice • explore the boundaries and areas of overlap between the practices of perfumery and olfactory art, as well as those between olfactory and non-olfactory arts. The project consists of 2 main components: 11. A curated exhibition featuring scentfocused explorations by internationallyestablished artists and perfumers of the above text and its themes 22. An open call for artists to interpret the same themes in line with their own experience or places of reference

objectives «Scents of Exile» aims to create a dynamic perspective of scent as an art form by exploring how a single brief could be interpreted by artists from distinct but related disciplines: the established practices of perfumery and nonolfactory art, and the emerging practice of olfactory art in between. While perfumery is traditionally focused on accessible and accepted norms of beauty, the 21st century saw a surge in experimental, edgy and controversial scents that remained niche but expanded the creative possibilities of fragrance making, and freed the art from the traditional restrictions of consumerist culture. Those fragrances remain outside commercial distribution shelves, but make a statement of what “could be”. On the other hand, olfactory art as an emerging discipline has been exploring scent as a nascent medium in contemporary art making. While the art’s form is primarily installations, scent is often the main component and source of the message and dialogue in the produced artwork.

Bringing together perfumery and olfactory art in the same platform is another level of inquiry over the possibilities and expressions of scent as a primary sensory experience: how its form influences its semiotics; how the traditionally consumer-oriented could shed off this skin and become a counterpart to installation and “museum” art. It also blurs the boundaries between the ethereal scent and the physical form, transcending both in the process. Realizing that olfactory art is still unfamiliar territory and that the comparative aspect may make it more challenging, we wanted to make the project more accessible (and enjoyable) to the public by starting from something familiar: an evocative poetic text by a renowned literary figure as an access point for the exploration. We also aim to supplement the olfactory medium with other media, inviting artists working with other media to participate. This will both augment and widen the reach of the dialogue we intend to create around the project, as well as give the project more value and potential exposure.

9 cities with 9 specific scent compositions are mentioned in the text. Those will inspire and guide the creation of 9 fragrances through the intervention of 9 established perfumers. Individual perfumers are to pick one (or more) of the cities/notes mentioned in the text according to their own preferences and work on actualizing them. Alternatively, they might choose to work with the theme more broadly, creating scent concepts that concretize their idea of exile, nostalgia and separation. We hope the notes will lead to compositions that are contemporary and rather experimental. The creative tension in this brief goes beyond the notes, and explores the antagonism of distance (intrinsic to exile) and the aspect of “existing on one’s own skin”. The scent becomes a reminder of a place, much like a picture or paraphernalia. While our hope is that the fragrances would be commercialized at a later stage if they prove to be “wearable” enough, they are to be initially developed for the purpose of the exhibition, and are not specifically intended to be mass crowdpleasers.

For scent design, we are proud to partner exclusively with Givaudan, the world-leading perfume house that’s behind many of the greatest fragrances in the history of perfumery. Besides tackling the fragrance briefs, Givaudan’s perfumers in Paris, New York and Dubai can collaborate with the olfactory artists on designing the scent component of the exhibition’s installations. This collaboration fits within the company’s overall creative strategy of accompanying creators as they emerge, and of promoting young talents and initiatives which allow perfumers to get a feel for zeitgeist and its evolution. It is an exercise to understand and capture the universe of artists in order to get inspired by creativity in its rawest expression.

THE ARTISTS For the sake of the exhibition, we have chosen a number of established olfactory artists. The brief to them is to develop artwork or installations that are inspired from the text or built on theme more broadly, so that we can trace a direct parallel of interpretation between the fragrances and the resulting artworks. We are currently in talks with the olfactory artists in the following section. The list should expand further after information about the exhibition venues and dates become confirmed. In addition, we will contact a few established Arab non-olfactory artists to participate in the exhibition, to evoke the scent-focused theme with their own work media. The artists we shall approach would be ones with a personal experience of exile and distance, people from one place living in another and representing different Arab national backgrounds.

THE OPEN CALL The third component of the project is an open call for creative types and artists from various media and disciplines (visual, sound, installations, olfactory) to come up with concepts and works based on the text’s theme. In reaching out for the artists, we will focus on those of Arab nationalities mostly, but we are not excluding others. The concepts will be submitted online through the project’s dedicated website/ blog, and evaluated jointly by ourselves and designated members from our project partners. The ensuing good concepts will be published on the project’s online and social communication channels, creating anticipation for the exhibition and awareness about the project as a whole. Around 20 of the best submitted works will be selected, given budgets for execution, and exhibited along with the rest of the curated work and fragrances.

Ashraf Osman is an architect, art curator, and the founder and director of ARTINECT, a consultancy for connecting art both physically and virtually. Ashraf did his postgraduate curatorial studies in Switzerland (Master of Advanced Studies from the Zurich University of the Arts, ZHdK) with a focus on both olfactory art and socially-engaged art. He is the author of a brief academic survey of olfactory art in the 20th century, as well as ScentArt.net, a resource for olfactory art in the 21st century. Before that, Ashraf worked for more than 10 years as an architect in the US. He did his graduate architectural education (Master of Architecture) at Syracuse University (NY) and worked in Princeton (NJ) and Philadelphia (PA), where he also taught Interdisciplinary Design Foundations for 2 years at Philadelphia University. He is a Registered Architect both in the US and Lebanon.

In 2012, Raafat Hamze founded and became the lead strategist of Syndicate, a location-free network of collaborators in communication, design and innovation. This came as a culmination of more than 10 years of experience in various disciplines of Marketing in companies like Siemens Product Visionaries (trend hunting for product development), Sony Electronics (marketing communications and consumer research), Fawaz Alhokair (brand identity development) and Solidere (online communications). With Syndicate, Raafat leads long-term projects, like the design and semiotics integration for Roadie Tuner, winner at the 2010 edition of Stars Of Science, as well as various advertising and communication assignments for Hempel Paints. Raafat lived, studied and worked in The Netherlands, Japan, Dubai, Saudi Arabia, and Beirut where he is currently based.

«Scents of Exile» is an olfactory art project that investigates the memory, identity and nostalgia of scents associated with cities and places no longer accessible. It takes as its point of departure the above text by prominent Arab poet Mahmoud Darwish. The project aims to: • raise awareness of olfactory art as an emerging area of contemporary artistic practice • explore the boundaries and areas of overlap between the practices of perfumery and olfactory art, as well as those between olfactory and non-olfactory arts. The project consists of 2 main components: 1. A curated exhibition featuring scent-focused explorations by internationally-established artists and perfumers of the above text and its themes 2. An open call for artists to interpret the same themes in line with their own experience or places of reference 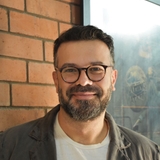