The Epistle to Titus 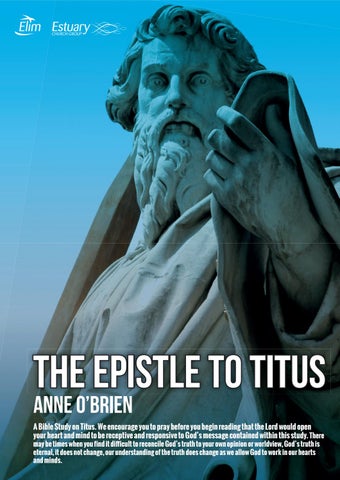 THe Epistle to TITUS Anne O’BrieN

A Bible Study on Titus. We encourage you to pray before you begin reading that the Lord would open your heart and mind to be receptive and responsive to God’s message contained within this study. There may be times when you find it difficult to reconcile God’s truth to your own opinion or worldview, God’s truth is eternal, it does not change, our understanding of the truth does change as we allow God to work in our hearts and minds.

The Epistle to Titus Introduction Excerpt from W. Barclay: We do not know a great deal about Titus, to whom this letter was written, but from the scattered references to him, there emerges a picture of a man who was one of Paul’s most trusted and most valuable helpers. Paul calls him ‘my true son’, so it is most likely that he himself converted him, perhaps at Iconium. Titus was the companion for an awkward and difficult time. When Paul paid his visit to Jerusalem, to a church which suspected him and was prepared to mistrust and dislike him, it was Titus whom he took with him, along with Barnabas. Titus was the man for a tough assignment. When the trouble at Corinth was at its peak, it was he who was sent with one of the severest letters Paul ever wrote (2 Corinthians 8v16). Titus clearly had the strength of mind and the toughness of fibre which enabled him to face and to handle a difficult situation. There are two kinds of people. There are people who can make a bad situation worse, and there are people who can bring order out of chaos, and peace out of strife. Titus was the man to send to the place of trouble. He had a gift for practical administration. It was Titus whom Paul chose to organise the collection for the poor members of the church at Jerusalem (2 Corinthians 8v6&amp;10). It is clear that he had no great gifts of speech, but he was a man for practical administration.

I think of Titus as a New Testament equivalent of Nehemiah. Nehemiah’s task was to rebuild the city of Jerusalem and its walls, and to re-establish obedience to God’s Law. Titus’ commission was to build up the church in Crete and establish order and obedience to God. Like Nehemiah, he would have to be ready to rebuke and retrain – it was not an enviable task. The Cretans were reportedly liars, evil brutes and lazy gluttons! (Titus 1v12 - quoted from a famous Greek poet, Epimenides) Reading between the lines, a summary of this epistle shows us that their behaviour left a lot to be desired. They were: in bigamous relationships, had unruly children, arrogant, quick tempered, drunk and violent, greedy for money, slanderers, and the women were slaves to wine. That shows us what Titus was up against! Paul wrote this epistle for Titus in AD 63 with instructions and encouragement for this difficult mission. We will study the Book of Titus as one letter, rather than in separate chapters. It basically falls into two headings: COMMISSIONS AND RESOURCES

COMMISSIONS A commission is a task that has been entrusted to you to carry out. As we look at Titus we need to remember that God has a calling for each of us, and that he will often use our natural gifts, giving us the resources we need as we obey him. Titus’ commission was to bring order and teaching to one of the early churches.

Q. Were you ever in the position where someone had great expectations of you? Did you fulfil those expectations? a) Appointing leaders/overseers – Read chapter 1v5-9 The success of any organisation depends on the character of the people at the top. People cannot lead where they have not been themselves. Many a church has gone astray because of poor leadership. But Paul makes it clear that the basis of good Christian leadership is not personality, not even character but adherence to the Word of God (see verse 9). Q. How and why does moral reasoning differ between Christians and most people in the world today? b) Giving a rebuke to wrongdoers – Read verses 10-16 There were obviously those in the church who were preaching Jewish myths, “those of the circumcision group” (v10). There were Jewish converts in Crete (probably as a result of Peter’s preaching on the Day of Pentecost in Jerusalem, some 30 years earlier) who were adhering to Judaism as well as Christianity. And this was all mixed with Jewish myths (v14). In other words, they had made up their own gospel, and worse still, they were making money from it – telling people what they wanted to hear. Q. Can you think of any ‘christian-like’ sects that may be dangerous? Why are they dangerous? c) Giving good teaching and example – Read chapter 2v1-10 Titus was called to educate the people in the ways of Christ, just as our pastors do week after week. Titus set a right example and encouraged others in doing so, in order that the gospel could flourish, and that God would be glorified. Q. Can you think of one person who has taught and encouraged you in your Christian walk? d) Being a good citizen – Read chapter 3v1&amp;2 When we watch the News it is easy to see what happens when people do not conform to authority in a country. We are to be good citizens and to do our best for our fellow men and women. In Crete it was a case of “every man for himself” – this is the antithesis of the Christian gospel where we are called to put God first and others before ourselves. Crete’s reputation (chapter 1v12) was a bad witness for the Christians. In Matthew 7v16 Jesus says, “You (Christians) are known by your fruit.” Titus had an unenviable task of bringing order out of chaos in the church on Crete. He would need resources to carry out his commission. Paul knew that Titus would look to God for the resources and the confidence he needed. When God calls us, he also equips us.

RESOURCES Resources can be those things that we find within ourselves when we are asked to ‘step up to the mark’. They are things like ability, ingenuity, initiative, tenacity and talent. They can also be spiritual gifts like love, hope, words of wisdom and knowledge etc. And our resources can also be things provided for us by other people. If Titus was to make a good job of reforming the church in Crete, he would have to know what resources he could draw on. Q. Think of one thing you did this week. What resources did you need to be able to do it? Resources available to Titus: a) Paul – Read Ch.1v1-4&amp;9 Paul, his friend, “father” and teacher, someone who had great faith in Titus - was perhaps Titus’ greatest resource. Paul had imparted his vast knowledge of the scriptures to Titus, and it is likely that Titus would have read many of the epistles to the other churches. Therefore, he had the Word of God as his “go to” resource. When we read and know God’s word, we have a benchmark for behaviour, we have an assurance that God is with us and we are assured of his resources. Titus had learnt well from Paul. b) The elders and other believers – Read Ch.3v12-15 There were people of integrity who Titus was to appoint as elders (v5), and there were others who were coming and going. None of them had been able to sort out the problems in Crete, but nevertheless, they were there to support Titus. Again, I see similarities with Nehemiah. Nehemiah’s leadership style was not authoritarian one but, rather he worked alongside the people, building the wall. Titus would also be working with trusted Christians to rebuild the church. Leaders who spend time with the ordinary people get better results. c) Grace – read Ch. 1v4, 2v11&amp;12, 3v7 Titus was going to need plenty of grace! Most church leaders wouldn’t get by without God’s grace working in their lives. We can only show God’s grace to others as we experience it in our own lives. The Cretans were a disgrace to the church, and Titus had to turn them round from being a disgrace to being graceful. It’s a hard call to show grace to people who are being offensive, selfopinionated, and lazy. To be right before God, we need to be able to reflect his grace to others. d) Hope – Read Ch.1v2 and 2v13 When bogged down in the nitty gritty, Titus needed to remember the bigger picture: The purpose and goal of all Christians is the hope of Heaven. Again, it is God who puts hope in our hearts and we who share it with others.

e) Love and Mercy – Read Ch. 3v4&amp;5 Once again, like grace and hope, what we have received from God we should be willing to share with others. Titus’ job was to renew the church and it’s commitment. The most basic things had to be put in place first. But these same things were also Titus’ resources, as he experienced them in his own life. f) The Holy Spirit – Read Ch. 3v5b&amp;6 The people of Crete were probably converted to the gospel on the Day of Pentecost. So, if the Cretans had been saved by the Spirit, then they had the potential to be changed by the Spirit. Titus and Paul were men full of the Spirit, if God hadn’t given up on the Cretan believers, neither would they. Titus knew the PRESENCE and the POWER of the Holy Spirit to help him and guide him through his difficult task. Q. When people wander away from the Truth of the Gospel, do we write them off too soon? What does this letter to Titus tell us about God’s love for his workers and God’s love for those who have not followed him so closely?

Paul’s Final Commission – TO US Read Chapter 3v14&amp;15: We may not be leaders, but Paul doesn’t let us get away with an easy life. Discuss how we can fulfil Paul’s commission to us in these two verses: n Devote yourself to doing what is good n Provide for urgent needs n Do not live unproductive lives n Be welcoming to other Christians n Experience and share in God’s grace Where the grace of God is missed, bitterness is born. But where the grace of God is embraced, forgiveness flourishes…. You will never be called upon to give anyone more grace than God has already given you. Max Lucado

The Estuary Elim Group of Churches are three Essex based Elim Pentecostal Churches in Ashingdon, Rayleigh and Southend on Sea with a shared Leadership team. We are a group of people responding to the love of God and the life changing message of Jesus Christ. Our services are lively with contemporary music, worship and preaching and teaching relevant to the 21st Century. To find out more about us visit www.estuaryelim.church Whether you are new to church, someone with questions or a committed Christian, we want to serve you and help you discover and fulfil Godâ&amp;#x20AC;&amp;#x2122;s purpose for your life. If you would like an opportunity to email or talk to one of the team email your contact details to info@estuaryelim.co.uk and we will get back to you. The Ashingdon, Rayleigh and Southend Elim Pentecostal Churches are branches of The Elim Foursquare Gospel Alliance (Registered Charity No. 251549)

The Epistle to Titus

I think of Titus as a New Testament equivalent of Nehemiah. Nehemiah’s task was to rebuild the city of Jerusalem and its walls, and to re-establish obedience to God’s Law. Titus’ commission was to build up the church in Crete and establish order and obedience to God. Like Nehemiah, he would have to be ready to rebuke and retrain – it was not an enviable task. 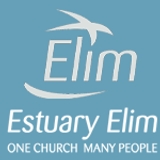