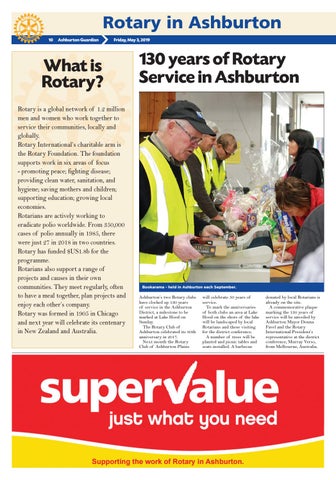 What is Rotary? Rotary is a global network of 1.2 million men and women who work together to service their communities, locally and globally. Rotary International’s charitable arm is the Rotary Foundation. The foundation supports work in six areas of focus - promoting peace; fighting disease; providing clean water, sanitation, and hygiene; saving mothers and children; supporting education; growing local economies. Rotarians are actively working to eradicate polio worldwide. From 350,000 cases of polio annually in 1985, there were just 27 in 2018 in two countries. Rotary has funded $US1.8b for the programme. Rotarians also support a range of projects and causes in their own communities. They meet regularly, often to have a meal together, plan projects and enjoy each other’s company. Rotary was formed in 1905 in Chicago and next year will celebrate its centenary in New Zealand and Australia.

130 years of Rotary Service in Ashburton

Bookarama - held in Ashburton each September.

will celebrate 50 years of service. To mark the anniversaries of both clubs an area at Lake Hood on the shore of the lake will be landscaped by local Rotarians and those visiting for the district conference. A number of trees will be planted and picnic tables and seats installed. A barbecue

Supporting the work of Rotary in Ashburton.

donated by local Rotarians is already on the site. A commemorative plaque marking the 130 years of service will be unveiled by Ashburton Mayor Donna Favel and the Rotary International President’s representative at the district conference, Murray Verso, from Melbourne, Australia.

Rotary in the Ashburton District

Rotary International has two clubs in the Ashburton District – Ashburton and Ashburton Plains. The Rotary Club of Ashburton has held the town’s annual Bookarama for 40 years. The project has grown into a major one-week extravaganza for second-hand book lovers. Over the years the project has generated around $1 million for the club to put back into supporting community projects, organisations and individuals. The Rotary Club of Ashburton Plains run a variety of projects but are possibly most visible in Ashburton in the lead up to Christmas when members sell the new potatoes the club grows. A Classic, Vintage and Veteran Car Run is also organised annually by the club during Ashburton’s Wheels Week. The run is now in its 27th year, and like the potato sales, generates funds to be spent in the community.

Both clubs support young people in a number of ways including assisting them to attend Outward Bound, the National Rotary Science Fair, Rotary Youth Exchange, the Rotary Youth Leadership Award programme, academic excellence awards, annual Pride of Workmanship Awards, the Young Totara Award and scholarships through the Advance Ashburton Charitable Foundation. The clubs have also supported, jointly and separately, a number of community projects around Ashburton including the EA Networks Centre and the Ashburton Museum. The Rotary Club of Ashburton meets each Tuesday, 5.30pm, at the Ashburton RSA. Enquiries to 308 9997. The Rotary Club of Ashburton Plains meets each Wednesday at 6.00pm at the Ashburton MSA. Enquiries to 308 2257.

BUILD with CONFIDENCE Over 45 years of knowledge and experience.

Build, Alteration or Renovation and Repairs

Engage a Registered Master Builder and build with confidence and assurance. 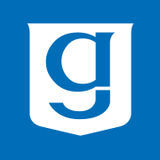