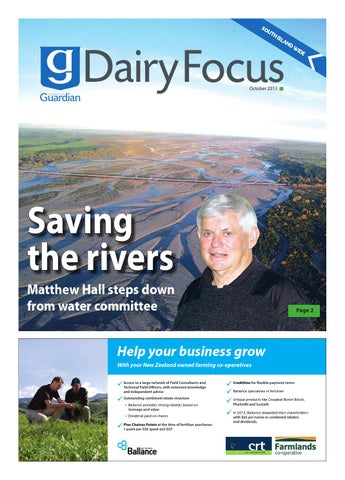 Saving the rivers Matthew Hall steps down from water committee

Help your business grow With your New Zealand owned farming co-operatives Access to a large network of Field Consultants and Technical Field Officers, with extensive knowledge and independent advice

t#BMMBODFQSPWJEFTTUSPOHSFCBUFTCBTFEPO tonnage and value t%JWJEFOEQBJEPOTIBSFT Plus Choices Points at the time of fertiliser purchases: 1 point per $50 spent incl GST

*O #BMMBODFSFXBSEFEUIFJSTIBSFIPMEFST with $65 per tonne in combined rebates and dividends.

Getting farmers, environmentalists and politicians to agree is a tough ask, but as Matthew Hall steps down from a three-year role, he is optimistic the Ashburton Water Zone Committee is in good heart.

atthew Hall is hoping to do a little more fishing in the next year or two. With the Ashburton River at his door, he is optimistic the most over-allocated waterway in Canterbury will have more water in it in the next few years. More water in the Ashburton means the river mouth is open for longer and fish can migrate and spawn. Mr Hall has good reason to be optimistic. He is the chairman of the Ashburton Water Zone Committee, a group of smart and diverse community members charged with recommending important rules about water use and farming practices in Mid Canterbury. The committee is coming up to the end of its three-year journey, a huge mission and balancing act, satisfying environmental and economic aims within the Canterbury Water Management Strategy. Mr Hall is one of two community committee members standing down, a step essential in keeping the committee revitalised, he says. The committee’s makeup is unlikely to change until well into next year though, as it is crunch time setting limits for water quality and quantity in the Hinds Plains area. The nutriment limits affect how much fertiliser farmers can apply, impacting what and how they farm. The aim is to limit nitrates leaching into groundwater or other waterways and manage other environmental effects. Limit setting rules break new ground and the zone committee mandate is to encourage community discussion. Mr Hall is

rapt the community is engaged and wrestling with the issues, even if the debate gets lively at times. He knows not everyone will be happy with the outcomes, but farmers and town folk alike are keen to preserve or improve the environment. Despite the fact Mr Hall, a passionate fisherman, has had little time in the past three years to fish because of water zone work and other commitments, he says being on the inaugural committee has been an enjoyable challenge. He was a natural choice to lead the diverse group - a former trust manager and chartered accountant at Perpetual Trust (PGG) for 40 years dealing with farmers, and a Save the Rivers campaigner. It has been a lifelong challenge balancing his environmental interests with the push for more irrigation and economic growth. The same conundrum faces the zone committee so he is well practised. Also on the committee are dairy farmer and deputy chairman Greg Roadley, irrigation supporters Gordon Guthrie and Ben Curry, high country farmer Donna Field, and environmentalist Sheryl Stivens. Environment Canterbury is represented by former Government minister David Caygill, the Ashburton District Council by councillor and farmer Neil Brown, and rununga is represented by Arapata Reuben and Karl Russell. It concerns Mr Hall that he is the only urban representative on the committee and says it is important townies’ points of views continue to be heard when he steps down. Mr Hall’s family has had a bach at the Rangitata River mouth since 1924 and rivers and fishing have become a passion in his lifetime. He says the water zone

committee’s big three achievements have included a plan to raise the minimum flows in the degraded Ashburton River, a zone implementation plan with a huge 72 recommended actions around water, and the Hinds sub catchment plan (which should be out for final public consultation in February). The plan for the Ashburton River was first, with a set of rules designed to raise the minimum flow in the river to six cumecs by 2017. Mr Hall says this is achievable, “pinching a bit” from the stockwater system (which is Ashburton River water anyway), and the improved flows will be hugely beneficial for the river. “It will not keep the mouth open all the time, but a lot more than it has been. It needs nearer to 10 cumecs but six will keep it open for more time, and the longer it is open the more species can migrate and complete their lifecycle.” The community had previously spent 20 years, and a long series of workshops, trying to get community agreement on a plan to improve the health of the river. The river was over-allocated and clawing back resources is hard because people and their livelihoods can be affected,

which means great care is needed finding solutions and recommending change. Coming up with a zone implementation programme was also a big deal. It has 72 actions, recommended after public feedback, on river flows, biodiversity, water quality and quantity. The limit setting in the Hinds catchment will be another important box ticked, with limit setting for the rest of the district to follow. It is likely that the Canterbury Regional Council will set default limits through its Land and Water Regional Plan but a local community being involved in shaping its own realistic solutions will be hard to ignore. Mr Hall says the eyes of the country are on Canterbury, especially Mid Canterbury, when it comes to balancing the environment with farming for profit for New Zealand Inc. “The real ideal is if the local community and farmers show they can manage nutrient load limits to the best of their ability. It may take time to achieve targets but these wil be assessed and reassessed and we are just starating on the path that will get us there.” Almost all farmers were now using technology and science

to better manage nutrients, and adopting good management practices, he said. The challenge will be that no one lets the industry down. Improving water quality and quantity is no quick fix and Mr Hall says goals can only be set five years out, 10 at the very most, and need to be reviewed as the landscape responds. Nature adapts, he says. He looks back to 150 years ago when Mid Canterbury east of the main road was swamp and west tussock. Man has modified the landscape so much that the swamp now needed to be irrigated, while in the upper plains water is drawn from rivers to irrigate farmland. He says Mid Canterbury is years ahead of the rest of the country when it comes to irrigation, with water-delivery systems like the Rangitata Diversion Race, storage and efficient spray irrigators. While water was a renewable resource, it still had to be used sustainably and future energy generation and piping will continue to be important enhancements. “Environmentally we have a way to go. We are well ahead with farming but our environment has been a bit neglected.” Mr Hall worries about letting down both fellow environmentalists and farmers he has worked with over the decades. He has been careful to balance both and says the integrity of committee members has played a huge part in that. Despite their different agendas, there have been no big dust-ups. In fact, they respect each other as people doing a hard job for the benefit of generations to come. “I think we have made a difference. We have built a path and we are moving forward on it.”

RAINER IRRIGATION - SUPPORTING YOU WHEN THE WEATHER ISN’T...

ast month I was fortunate to be invited to address a conference of agriculture ministers from across the Americas in Argentina. While there I took the opportunity to visit Uruguay and Paraguay â&#x20AC;&#x201C; countries with real potential. It is important for New Zealand to diversify our markets and what we export. Latin America has a population of about 600 million people and is rapidly growing, which is creating real opportunities for New Zealand. A key message I pushed throughout this trip was that we see ourself as a collaborator rather than a competitor in this part of the world. Where New Zealand can assist these countries is not by exporting more produce because they are all pretty much self-sufficient in food production. What we can offer is Kiwi agricultural â&#x20AC;&#x153;know howâ&#x20AC;? and product expertise. Argentina, Uruguay and Paraguay have much in common. They are all massive beef and grain producers. They have large tracts of grasslands in varying stages of development and in most places fertile soils that can grow some of the best soybean crops in the world. One drawback is having had foot and mouth disease. They are now managing it with vaccines, which has restricted access into some overseas markets. The dairy industry in this region offers considerable potential for

We canâ&#x20AC;&#x2122;t feed the world populaĆ&#x;on, but we will conĆ&#x;nue to add value through innovaĆ&#x;on, niche products, branding and selling the New Zealand story.

Nathan Guy, Minister of Primary Industries gets up close with a 1250kg hereford bull at a Uruguay ranch.

growth. For example, Paraguay only produces eight litres of milk per cow per day. This could be due to tropical pastures with low digestibility, or a lack of high producing dairy genetics. The same is true in Brazil where they have 200 million cattle and about three-quarters are hand milked. The sheep industry is also undeveloped but offers huge potential. Merino or corridale sheep are ideally suited to the mountainous Andes and meat breeds for the plains. The sheep flock numbers are small (about 700,000 in Paraguay) which creates supply chain issues, a lack of processing plants and the domestic population not used to eating lamb like we are used to. New Zealand companies are exporting products into these markets and doing a great job. Products like electric fences, animal and pasture genetics, animal health products, milking machine and meat processing technology are in demand. Some of our research facilities and universities are also involved in

collaborative projects in these countries. Some of you might be wondering if New Zealand is selling its comparative advantage to our future competitors? My response is that we live in a global economy that is becoming more open all the time. We canâ&#x20AC;&#x2122;t feed the world population, but we will continue to add value through innovation, niche products, branding and selling the New Zealand story. Overtime we will move more product lines out of commodities into superior value added lines. We will continue to sell large amounts of protein into Asia, but

clearly the biggest opportunity in Latin America is through joint ventures and selling our products to their farmers. The proceeds of these sales flow right back into our economy. This is happening already in Chile where we have a free-trade agreement in place. Since 2007 New Zealand companies and individuals have invested $630 million in Chile. We have a strong reputation in this part of the world for our agricultural expertise. We should be proud of this and maximise the opportunities it brings. I saw some of this first-hand earlier this year when I was fortunate to travel to Mexico, Columbia, Chile and Brazil with

Prime Minister John Key and a trade delegation. During that visit I invited Colombian farmers to visit New Zealand to understand more about our agricultural systems and technology. As a result, 170 Colombian farmers recently made a successful visit here. Building closer links with international agricultural leaders is hugely important to New Zealand. Thatâ&#x20AC;&#x2122;s why the Government is now funding four places a year for a new study tour to New Zealand. This will be funded by the Ministry for Primary Industries and supported by Federated Farmers.

We are in your area.