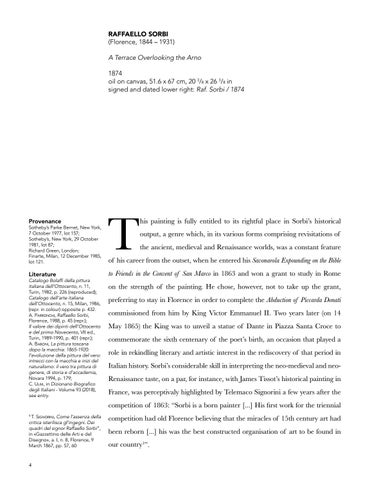 his painting is fully entitled to its rightful place in Sorbi’s historical output, a genre which, in its various forms comprising revisitations of the ancient, medieval and Renaissance worlds, was a constant feature

of his career from the outset, when he entered his Savonarola Expounding on the Bible to Friends in the Convent of San Marco in 1863 and won a grant to study in Rome on the strength of the painting. He chose, however, not to take up the grant, preferring to stay in Florence in order to complete the Abduction of Piccarda Donati commissioned from him by King Victor Emmanuel II. Two years later (on 14 May 1865) the King was to unveil a statue of Dante in Piazza Santa Croce to commemorate the sixth centenary of the poet’s birth, an occasion that played a role in rekindling literary and artistic interest in the rediscovery of that period in Italian history. Sorbi’s considerable skill in interpreting the neo-medieval and neoRenaissance taste, on a par, for instance, with James Tissot’s historical painting in France, was perceptivaly highlighted by Telemaco Signorini a few years after the competition of 1863: “Sorbi is a born painter [...] His first work for the triennial

competition had old Florence believing that the miracles of 15th century art had been reborn [...] his was the best constructed organisation of art to be found in our country1”.