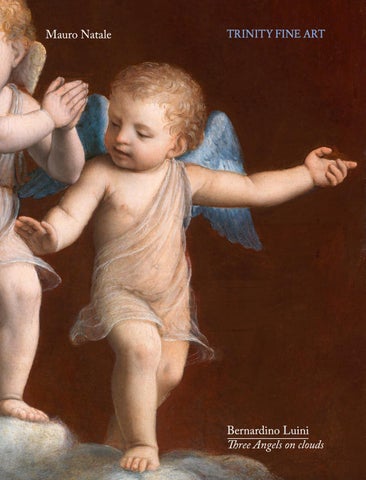 he three angels depicted on this panel rest their feet on small clouds and are characterised by the variety of their poses and by the serene expressions on their faces, suggesting a sentiment of ethereal happiness. They wear small tunics of transparent gauze and each one has different coloured wings: green on the left, white in the centre and blue on the right. Their gazes converge towards a point, lower left, outside the surface of the painting. Thus the picture is likely to have once formed part of a polyptych with a Nativity or an Adoration of Jesus in its central panel, reflecting a compositional type of which examples abound in earlwy 16th century Lombard art, for example Bernardo Zenale’s Adoration of the Christ Child (Los Angeles, The J. Paul Getty Museum, fig. 1) painted for the Confraternita dell’Immacolata Concezione associated with the Franciscans in Cantù (1502), the Adoration of the Shepherds by Pedro Fernandez (c. 1506–7) in the collection of the Marquis of Villahermosa in Pedrola (Zaragoza), and a number of versions by Bernardino Luini, ranging from the

Adoration of the Magi frescoed on the south wall of chancel in the Santuario della Beata Vergine dei Miracoli in Saronno (1525, fig. 2) to the Adoration of the Shepherds (c. 1530–2, figs. 3,4) painted on one of the canvas doors protecting the

altarpiece of Sant’Abbondio, carved by Giovanni Angelo Del Maino for Como Cathedral in c. 1514. Similar angels with transparent tunics and coloured wings playing musical instruments while standing on small clouds may also be seen in the upper part of the altarpiece depicting the Madonna and Child Enthroned with Saints and Cardinal Scaramuccia Trivulzio (Bishop of Como from 1508 to 1518, fig. 5) commissioned from Bernardino Luini for Como Cathedral some time between 6 July 1517 (the date on which the patron was raised to the purple, as we can tell from the vestments he wears in the painting) and 8 January 1518 (when Trivulzio stepped down as Bishop of Como in favour of his brother Antonio).

Defined by a vibrant, undulating profile, the figures stand out starkly against a monochrome background; a delicately nuanced chiaroscuro, inspired by the 7

work of Leonardo in the final decade of the 15th century (particularly the Apostles in his Last Supper, completed in 1497), defines the volume of the three figures’ bodies. The angels’ splendid formal modelling, the silvery tone of their flesh and their delicate, yet firm, chiaroscuro definition, their anatomy and their facial types calibrated on a pure, classicising naturalistic model, all point to this being a fully autograph work by Bernardino Luini. Moreover, the figures’ setting against a dark ground may be considered further evidence of Luini’s hand because we find it again in those works of his in which he seeks to achieve a particularly sculptural effect, for example the polyptych in Sant’Andrea a Maggianico where the saints are set on a plane defined by a dark background (c. 1512–13)1, the poignant Fig. 5: Bernardino Luini, Madonna and Child Enthroned with Saints and Cardinal Scaramuccia Trivulzio , Como, Cathedral

Several of the stylistic elements in this panel, with its extremely effective palette, at once sober and sophisticated, can be found as early as in some of the scenes that once decorated Gerolamo Rabia’s villa known as La Pelucca, in particular Vulcan’s Forge and the Sacrifice to Pan (both of which were detached

and transferred onto panels by Stefano Barezzi in 1821 and are now in the Pinacoteca di Brera)4; in the Sacrifice to Pan the two small Satyrs depicted before the altar already show that subtle balance between elegant draughtsmanship and

nuanced chiaroscuro that has achieved perfection in the panel under discussion here. And even closer comparisons may be made with a group of works painted shortly after the La Pelucca cycle, all of them dated between c. 1515 and 1518. In this phase, to which the Houston Lamentation (c. 1515, fig. 6), the paintings in San Giorgio al Palazzo (1516, fig. 7) and the large panel on the altar of

St. Jerome in Como Cathedral (1517–18) all belong, Luini shows a strong affinity with the styles of Bartolomeo Suardi, known as Bramantino, and of Bernardo Zenale, whose pale, opalescent handling of flesh and whose tendency to simplify the volumes of his figures Luini skilfully bolsters. Luini’s work is marked in this phase by the style of two Lombard masters older than him,

but in interpreting their style he eliminates all sharpness with the “ornament of courtesy”, as Giorgio Vasari so appositely defines his character and style (1569)5. ❡❡❡

A résumé of the studies on the collection is in A. Mazzotta, Storia della quadreria nel palazzo, in Palazzo Litta a Milano, ed. E. Bianchi, Cinisello Balsamo (Milan) 2017, pp. 159-173. 7

It is impossible to ascertain the original location of this painting as things stand today, but it must have been painted in a fairly narrow time frame some time between c. 1515 and 1518. None of Luini’s Nativities or Adorations of the Christ

Child that can be dated to this period has the dimensions or formal requirements for it to be associated with the Three Angels on Clouds, whose innovative design was rapidly perceived as being an element in its own right, not bound in any

way to the context for which it had been conceived. This contention is borne out by the existence of various old copies faithfully reproducing the composition. One of then, painted on panel in the 16th century (58.5 x 75.2 cm) (Fig. 8), belonged to the Litta Visconti Arese collection in Milan in the 18th century6 11

and, thanks to its illustrious provenance, it has long enjoyed undue fame7; while another copy, also on panel (57 x 72 cm) (Fig. 9) and dating to the time of Cardinal Federico Borromeo, Archbishop of Milan (1595–1631), was sold in Paris in 19838. In this connection, it is worth recalling that on 20 October 1516 Bernardino Luini pledged to Pietro Antonio Curti, an archpriest in San Vincenzo in Gravedona, that before Easter of the following year he would paint him an altarpiece comprising six panels, the central one of which would depict the

Nativity (“presepium unum bene pictum et laudabile et coloribus finis”)9. The dimensions of the polyptych (seven braccia by five, roughly 416 x 297 cm) and its date tempts us to envisage the three angels set above or at the top of the Nativity, but sadly this suggestion must remain purely hypothetical because no other part of the altarpiece has yet been traced. The painting is to be published in Cristina Quattrini’s monograph on Bernardino Luini, soon to be released by Editore Allemandi of Turin.