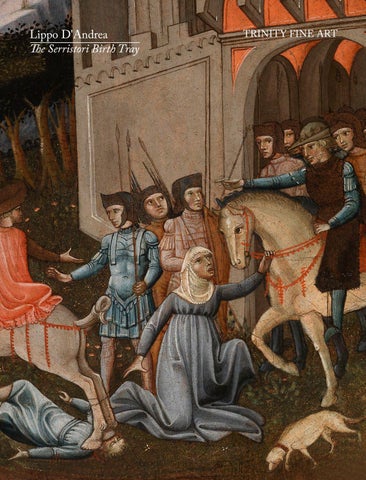 The Justice of Trajan (front); A putto playing the drum and blowing a flute (reverse) Desco da parto, or birth tray, painted on both sides; tempera on panel, dodecagonal, Ă&#x2DC; 71 cm (28 in), in an integrated frame

he Serristori birth tray is an item of considerable artistic and cultural interest. An object of daily use traditionally overlooked by art historians who have consigned it to the limbo of the so-called

“minor arts” for far too long, the birth tray was one of the primary supports used by certain patrons from the wealthy merchant classes to express their private and highly sophisticated late Gothic figurative taste. Testifying to a trend in Florentine art that was open to secular and courtly models of northern European origin, the Serristori tray is therefore a key piece in helping us to understanding the fascinating and contradictory era that marked the end of the Middle Ages in Florence. Painted on both sides, the tray depicts the Justice of Trajan on the front and a putto musician with a flute and a drum on the back. The literary source for the painting is an anecdote in Dio Cassius (XIX,5), subsequently related in Aurelius Victor’s Liber Caesaribus (XIII, 8) and in an anonymous work entitled Epitome di Caesaribus (XIII, 9). It was these sources that inspired the medieval ¹ For a bibliography relating to the legend of Trajan, see G. Paris, La Lègende de Traian, in «Bibliotheque de l’Ecole des Hautes Etudes», folder XXXV, Paris, 1878, pp. 261-298; M. Barbi, La leggenda di Traiano nei volgarizzamenti del Breviloquium di Fra Giovanni Gallese, Florence 1985.

legend1 to which the passage in Dante (Purgatory X:73–94), citing the story as an example of humility, also harks back. On the birth tray the legend is condensed into three main scenes: on the left, the widow witnesses the death of her son after he has been trampled beneath the prince’s horse; on the right, the widow stops the Emperor Trajan as he leaves the city and begs for vengeance for her son’s death; and in the background, the widow shows her humble abode to the prince who has become her adopted son in the meantime. The choice of this subject for a birth tray may seem somewhat unusual but it is justified by the scene in the middle ground where the virtue of a mother and the love of a son are celebrated as values that transcend mere lineal descendance. Alongside far better-known items such as bridal chests and coffers, a bride’s dowry would include a so-called “birth tray” of the kind under discussion here. A typical item of daily use connected with family life, the birth tray was designed to be used as a tray on which to place gifts for the new mother, but the

sophistication and workmanship that they often displayed rapidly transformed them from functional items into symbolic objects designed to bring good luck to mother and child. Unlike the coffer or the bridal chest – which were popular in many regions and over many decades – the birth tray is an item that was fashionable chiefly in Florence and its popularity reached a peak in the first half of the 15th century, when it played a major role in family life. Thus it plays a crucial role in helping

us to understand Florentine culture at the time, and it is in the local customs that we need to seek the origin of its popularity. Birth (like marriage) was not a private moment for the innermost family circle but a social ritual extended

to a circle which grew in size in proportion to the family’s social standing. In wealthy families, the first few days after a birth bore a close resemblance to 5

those that followed a wedding, with people constantly hurrying to and fro to visit the new mother in her bedchamber – which was turned into a reception room for the occasion – and to bring her gifts which were borne in birth trays. The birth tray was therefore an item with a strong social function, and the sophistication of its workmanship reflected the status as much of the patron who commissioned it as of the new mother for whom it was intended as a gift.

Emblematic in this sense is a birth tray painted by Giovanni di Ser Giovanni, known as Scheggia, and now in the Musée Jacquemart-André in Paris (fig. 1), where the scene depicted is a very appropriate Visit to a New Mother. The depiction of secular births in which other birth trays are shown was far from infrequent. In fact it was a tautologous, self-citing exercise that reflects an

interest in self-representation typical of an aristocracy which based its rituals on late Gothic courtly magnificence. Turning to the Serristori birth tray, we should note that its attribution to Lippo dâ&#x20AC;&#x2122;Andrea is fairly recent, dating back in particular to a suggestion put forward by M. Boskovits in the course of a conversation with Cecilia de Carli only in

19902. If we review the paintingâ&#x20AC;&#x2122;s critical history, we will find that the first tentative attribution was put forward by Collobi Ragghianti who, in likening our item to a birth tray with Birth Scenes owned by the Historical Society in New York (Figs. 2-3), suggested that it might be by a follower of the so-called Maestro del Bambino Vispo or Master of the Lively Child3. The parallel was

rejected by Gregori, who gave the tray to a more generic late Gothic Florentine master, but he did confirm its date around 1420–5 on the basis of, among other things, a stylistic comparison with the Historical Society’s tray which is dated 14284. The New York tray was used once again as a yardstick by Levi D’Ancona, who suggested attributing the Serristori birth tray to the same artist, namely Bartolomeo di Fruosino5, a suggestion subsequently endorsed by Pope-Hennessy although he brought the date of the Serristori tray forward to 14306. Carli, on the other hand, while considering the parallel between the two trays to be valid – both in terms of their architecture and of the modelling of the female figures and the anatomical definition of the putti on the back – put forward the name of Lippo d’Andrea, arguing that it may well be an early work by him.

Lippo d’Andrea is possibly better known to art historians as the Pseudo Ambrogio di Baldese, a nickname invented in 1927 by Van Marle7, who claimed that the painter must have been a Florentine close in style to Ambrogio di Baldese but a contemporary of Bicci di Lorenzo, thus working in the first half of the 15th century. Interest in this anonymous master then appeared to wane over the five next decades and it was not until 19638 that Zeri and Volpe attempted the critical reconstruction of a homogenous catalogue of his work, which consists chiefly in small panel paintings designed for private devotion. But it was only in 19799 that Padovani finally clarified the artist’s biography, and his identification as the “Lippo fiorentino” who painted the frescoes in the Nerli Chapel in the church of the Carmine in Florence (fig. 4) was further highlighted in subsequent scholarly appraisals10.

Despite the lengthy debate and the enormous attention focused on the artist, however, we still have relatively little documentary information concerning his life and work. He is recorded as a member of the Compagnia di San Luca in 1411, and in the same year he was working on frescoes for the façade of Palazzo

Crespo in Prato in the company of Niccolò di Pietro Gerini, Ambrogio di Baldese and Alvaro di Pietro. And in 1435–6 he was a member of a group commissioned to paint figures of the apostles in the tribune chapels in the cathedral of Santa Maria del Fiore to celebrate the new dome commissioned by Pope Eugene IV11. But while the documentary evidence does not assist us much in our endeavour to shed light on this artist, we are greatly helped in that sense

by a reconstruction attemped by Linda Pisani who, in endeavouring the clarify Lippo’s stylistic development, discusses the extensive catalogue of

works assigned to him and the attendant critical doubts still surrounding the artist12. Her study reveals a painter who achieved artistic maturity using Spinello Aretino’s later work and the young Lorenzo Monaco as his models, as we can see from the frescoes in the Nerli Chapel in the Carmine, whose somewhat late date may serve as a yardstick for the Serristori birth tray under discussion here13. Here too, we find strongly drawn silhouettes, a concise approach to the composition of space, a keen expressiveness in the

the more robust manner of Giovanni dal Ponte, where the volumetric handling of the figures marks a distance from Lorenzo Monaco’s sharp style, as we can see in the splendid fragment now in the Niedersachsisches Landesmuseum in Hannover (fig. 5). This stylistic change appears to accompany the artist’s career

through into the 1420s and ‘30s, when he repeatedly falls back, in stylistic terms, on the manner of Bicci di Lorenzo14. At any rate, moving beyond the complex critical and attributive aspect

– and regardless of the individual merits of one of the other theory – it is interesting to note how the debate over Lippo d’Andrea has offered scholars an opportunity to explore the late Gothic dynamic at work in Florentine culture.

This dynamic is frequently overlooked in favour of a more “Vasarian” and purist interpretation of the later Middle Ages in Florence and of the evolutionary role that they played in paving the way for the Renaissance. If we add to this the relative scarcity of such items of daily use as the birth tray – where the Gothic style is expressed at its best – and the limited interest shown by art historians in a genre considered “minor”, it is hardly surprising that we have had to wait until so recently for a correct reconstruction of the relationship between International Gothic and Florentine culture. That is the goal that Pisani set herself, and in reconstructing Lippo d’Andrea’s stylistic development, she paints the picture of a rich and contradictory figurative humus, of a cultural context in which the Early Renaissance coexists side by side with the extravagance of a more courtly art. Depiste a tendency on the part of certain scholars, inspired chiefly by Longhi, to paper over the inconsistencies and the contradictions rife in mid-15th century Florence – in favour of a “purist” vision of of Florentine Gothic and of the primacy of the so-called “major arts” – it is precisely in the production of birth trays, bridal chests, coffers, portable altars and books of hours (in other words, objects for private daily use which closely mirror their patrons’ taste) that we need to seek the courtly side of Florentine Gothic – the expression of a wealthy merchant society still steeped in feudal values, within which a figure such as Lippo d’Andrea did not merely find his place but may actually be seen as that society’s typical courtly illustrator.