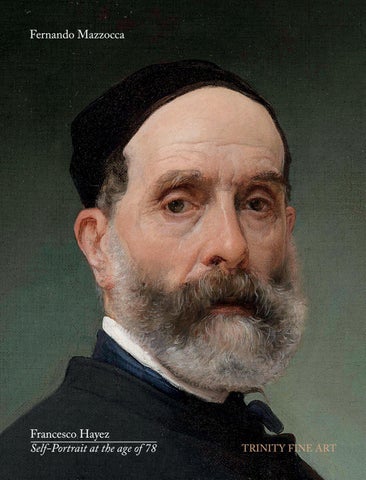 Francesco Hayez Self-Portrait at the age of 78

portraits by Francesco Hayez, some twenty1 of which

are known or recorded. Most of them – thirteen, to be precise – are now to be found in such leading Italian museums as the Pinacoteca di Brera and the Museo Poldi Pezzoli in Milan, the Gallerie degli Uffizi in Florence and the Gallerie dell’Accademia in Venice. Both the painting’s intrinsic style and the sitter’s apparent age tell us that it must have been painted shortly after two of the artist’s most important Self-portraits, painted in 1862, in which he depicts himself with enormous vigour at the age of 61, standing before his canvasin a two-thirds pose holding his palette and brushes. The two pictures in question are now in the Accademia di Belle

Arti in Venice and in the celebrated collection of artists’ selfportraits in the Gallerie degli Uffizi in Florence2. The pose, the treatment of the facial features and the hand

emerging from the cuff of his shirt sleeve all point, in particular, to the version in Venice. The choice of a close-up view and the absence of the canvas behind him, however, have allowed the painter, in avoiding all reference to his atelier, to focus on capturing his own facial features both in their physical characteristics,

which he handles with enormous skill, and in their thoughtful, concentrated expression. It is worth noting how his right hand is not clutching paintbrushes but rather a chalk held in a tool specially devised for the purpose, as he prepares to sketch out the

preparatory drawing for the picture on the canvas. It is almost as though he were seeking to highlight the importance of this phase in the creative process. His facial features, still astonishingly vigorous despite the imminent onset of old age, are conveyed in minute detail, standing out with terrific intensity against a

backdrop which is undefined yet skilfully rendered in shades of green. One is struck here â&#x20AC;&#x201C; also in the details of his dress such as the cuff of his shirt sleeve rolled back, and in his magnificent

comparison with the two larger (and consequently more official) portraits in Florence and Venice. Thus Hayez shows that he was

capable of constantly renewing his work, though without ever betraying the love of colour that made him the last champion of the great Venetian school whose heir he considered himself to be. We find the style and composition of this Self-portrait (limited to the bust alone) again several years later, in another Selfportrait which he painted in 1878, at the age of 81, and donated the following year to the Gallerie dell’Accademia in Venice, where it still hangs today. A very fine preparatory drawing of the head alone – bearing the autograph inscription: I primi segni d’una testa/ 19 Marzo 1869 [the first marks of a head/ 19 March 1869], and the signature Fran. Hayez – now in a private collection3, has hitherto been associated with the picture in Venice, but it should in fact be linked to the Self-portrait under discussion in this paper. And the fact that our painting should have been meditated on in such a meticulously defined preparatory drawing confirms the great store that the artist set by

the work and the intense image that he was eager it should leave of him to posterity. 7