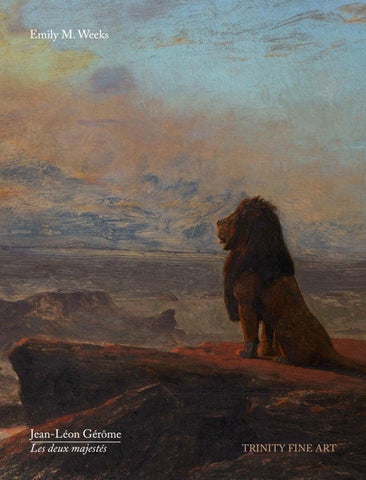 Provenance Suzanne Gérôme given by her father, ca. 1900; Gaspard Felix Tournachon, called Nadar, ca. 1904; Jules Bourgeois, Tournachon’s assistant, ca. 1904-1909; Given to his goddaughter, Angèle Saverse, 1910, Thence by descent to Guy Saverse, 1979 and to Christiane Bonafède, 1984, Private Collection, South-West France. Gérôme’s first lion painting dates from 1848, when he submitted an allegorical image of the French Republic featuring a resting lion to the annual Paris Salon. (Called Le Republique, this work is now at Mairie des Lilas.) His Christian Martyrs’ Last Prayers (1863-83, Walters Art Museum, Baltimore), however, was the painting that established lions as a major and consistent focus within his compositions. Gérôme’s exploration of the lion as the sole subject of his paintings began in the 1880s, and it is to this distinctive series that I here refer. The image of the tiger has a long history in European and especially British art, and very specific and complex political, historical, and personal references and meanings for Gérôme. Related but tangential to the discussion here, this will be the focus of a future article. 1

n the 1880s, the celebrated French academic painter Jean-Léon Gérôme began a series of animal pictures featuring lions, tigers, and other big game cats.1  The impressive number of these works produced over the course

of the next two decades establishes them as an important subgenre within the artist’s oeuvre, with both art historical and personal significance. Among the earliest and most enigmatic of Gérôme’s lion pictures from this period is Les deux majestés (The Two Majesties) of 1883, now at the Milwaukee Art Museum (fig. 1).  The present painting is an oil sketch for this finished work, given by the artist to his daughter four years before his death.  One additional, much larger sketch for the Milwaukee painting is known and numerous variations and copies exist.2 These stand both as a testament to Gérôme’s preoccupation with this subject and to its widespread popularity at the time. So too, each of these works serves as an instructive example of the artist’s rigorous working method, his unexpectedly “modern” investigations into color and light, and his tireless pursuit of perfection, in every picture’s design.3

Inspiration for Les deux majestés, and for his animal pictures more broadly, may have come from Gérôme’s friendship with Emmanuel Fremiet (1824-1910) and Antoine-Louise Barye (1796-1875), two of the leading animaliers of the

2 Cf. no. 322.2 in Gerald Ackerman’s catalogue raisonné for the artist (Jean-Léon Gérôme, Paris, 2000). The size of the present work, though considerably smaller than this recorded sketch, is standard for the artist.

day. Indeed, the small-scale bronzes that these men produced led Gérôme to create a variety of sculptures himself, intended both as independent artworks and as working “sketches” for his later paintings.4  By February 1890, Gérôme’s confidence in his abilities as a nascent animalier had clearly grown: He was now proposing life-size lion sculptures, “to bring some pleasure into my life and amuse myself a little. It will cost me a great deal, but one can’t pay too dearly for such pleasures!”5  One of these sculptures, located in the Parisian suburb

of Bougival, depicts a seated lion, reminiscent of the painted version here; a

After 1885 Gérôme painted well over a dozen desert or mountain scenes of lions, with several oil sketches being made of the same finished subject. At least four sketches titled Lion aux aguets, for example, relate to the version now in the Cleveland Museum of Art (Lion on the Watch, c. 1885), in varying degrees of finish.

side is even closer in its mood and look.6

Gérôme’s interest in the quieter, more introspective moments in the lives of these wild beasts – drinking from pools in the desert, surveying their domain, resting in their caves, or sitting contemplatively, as here - and in the depiction of a solitary male lion engaged in one of these pursuits, sets his works apart

from those of his peers, and from most precedents in the field.7 In the early

In an effort to reach a wider audience of collectors, Gérôme’s sculptures were made available at different price points, in different mediums and sizes.

menagerie – a Bengal tiger from India. (Gérôme would follow in their footsteps

the Jardine des Plantes in Paris, in order to sketch the newest addition to their

The nature of Gérôme’s works may be attributed to practicality as well: though there is some evidence of the artist hunting in North Africa and witnessing lions on site, the majority of Gérôme’s encounters with these animals would have taken place in a zoo-like environment, where he would only have been able to view them in isolation and at rest (see L. Lippincott et al., Fierce Friends: Artists and Animals, 1750-1900, exh. cat., Amsterdam, 2005-6, p. 124). 7

years later, also visiting the Jardine in order to sketch their famous cats.)8 These studies served Delacroix well in a series of vigorous oil paintings, watercolors, and small bronze statues created soon after his transformative journey to North Africa, in which lions and tigers are portrayed in the midst of struggle or strife.

8 Gérôme would also frequent various traveling circuses in Paris, studying the animals and eventually adopting one aged lion as a pet.

9 The Goupil and Knoedler stock books, now housed at the Getty Research Institute in Los Angeles, confirm that many of Gérôme’s lion pictures were purchased by American collectors as well.

Wealthy European collectors found much to admire in these exotic and vaguely Orientalist works, including a heightening of emotion, a pleasurable frisson, and a momentary escape from their modern urban lives.9 The image of a heroic male cat, moreover, would have held for masculine audiences a particular, if sexist, appeal. The inspiration for such gripping subject matter can be traced back much farther than the Romantic Delacroix, of course.  Among eighteenth-century

artists, George Stubbs (1724-1806) is most closely associated with the depiction of untamed animals in turmoil; he, in turn, was influenced by antique marble sculptures he had seen in Rome. In a deliberate effort to challenge the traditional hierarchy of genres in England, which held animal painting in fairly low regard, Stubbs showed animals in the kind of serious, dramatic encounters normally reserved for more “elevated” (i.e., classical, historical or biblical) subjects and scenes. The lion attacking a horse was the most popular of these themes, and was repeated in numerous - and increasingly sublime – variations (fig. 2).  The juxtaposition of these two beasts – the lion and the horse – was thought

to be particularly meaningful in both symbolic and political terms. It brought together two contrasting images, the one destructive, ferocious, “Eastern,”

and wild, the other, more familiar, “Western,” and (albeit not now) controlled. Their battle thus became a high-stakes drama, in which good struggled against evil, beauty against ugliness, European civilization against the savagery that was perceived around the world.  In this charged context, and despite the admiration that contemporary audiences felt for the sheer power of the lion, it was the horse that ultimately won.

See, for example, Albert Boime “Jean-Léon Gérôme, Henri Rousseau’s Sleeping Gypsy and the Academic Legacy,” The Art Quarterly, 34.1 (Spring 1971), pp. 11, 25, n. 68. St. Jerome’s attribute was the lion, having once saved one from injury and pain. In recognition of this association, in 1877 Gérôme had painted a picture (now lost) of St Jerome asleep in a cave, with his head against the body of a dozing lion.

This kind of allegorical reading has direct relevance for Gérôme’s lion pictures, and in particular for the subject presented here. Interpreted by the late Gérôme

scholar and author of the artist’s catalogue raisonné, Gerald Ackerman, as a profound political statement in which Napoleon confronts his exiled fate, Les deux majestés becomes a history painting par excellence.10 Other scholars have read the composition in symbolic terms as well: the lion may be a surrogate for the artist, whose very name contains both the word “Léon” (Latin, “lion”) and a reference to St. Jerome (“Gérôme”), who was often

associated with this animal.11 Contemporaries of the artist were quick to

note the physical similarities between man and beast as well: “A superb head with mane tossed back,” wrote M. de Belina of Gérôme in a Parisian art journal, “a lion who paints other lions and one scarcely knows which has the prouder glance, the painter or his model!”12 In 1883, the same year that the present work was painted, Gérôme had in fact made the autobiographical connection clear: In an oil sketch later given to his hometown of Vesoul, Gérôme inscribed the words “NOMINOR LEO” (“My name is lion”) on a

heraldic banner near a male lion stretched out along a rocky ledge (fig. 3).13 As compelling as these readings may be, however, the inspiration for Gérôme’s composition may initially have been more visual than political or selfinvolved.  Indeed, the subject, setting, and very title of Les deux majestés mirrors a work by the German painter Otto Friedrich Georgi (1819-1874) so closely, that it seems certain that Gérôme encountered it in person or through prints (fig. 4). Gérôme’s adaptation of Georgi’s scene is revealing, as it suggests how he felt it might be “improved”: by isolating and enlarging the male lion and easing his

watchful dis-ease, by eliminating all signs of human presence and animating the desolate landscape through vigorous brushstrokes instead, and by infusing the work as a whole with the ember-like hues and the pulsating flicker of a smoldering fire at dusk, Gérôme lifts the composition from the historical and descriptive to an uninterrupted meditation on the glory of nature and a remarkably avant-garde study of color, climate, and light.14

The lion’s look of slightly condescending or disdainful resignation may suggest the artist’s recognition that his pictures were destined for elaborate theorizing and critical investigation, even when his motives might be purely formal or mundane. Indeed, by the end of the 1880s, Gérôme was apparently exasperated by others’ attempts to find profundity and meaning in the finished version of the present work: “ ‘What is that?’ said Monsieur Critic, viewing [Les deux majestés] with the air of a connoisseur. ‘That – you see what it is,’ I [Gérôme ] replied; ‘a lion in the desert, looking at the setting sun.’  ‘Yes, monsieur - yes, I see. But – but, what does that prove?’ ‘It proves that you are an idiot!’ I answered,” (quoted in Fanny Field Hering, The Century 37.4 [February 1889], p. 495). 13

A close friend of the

Impressionists, he had been one of the early champions of Claude Monet (18401926), and Monet’s revolutionary Impression: Sunrise of 1872 (fig. 5). Looking at these pictures, and trading land for sea, it is hard not to imagine that Nadar had felt an unexpected connection between the artists and their works. Long regarded as enemies, engaged in a Stubbs-ian battle of the atmospheric versus the order and rule of line, here for a moment the two kings of Impressionism and Academicism find a common interest in the majestic glowing golden sun. ❡❡❡ This work has been authenticated by Dr. Weeks, and will be included in her revision of the artist’s catalogue raisonné, now in progress.