Trinity Fine Art: ANTONIO CAMPI - The Portrait of a Gentleman 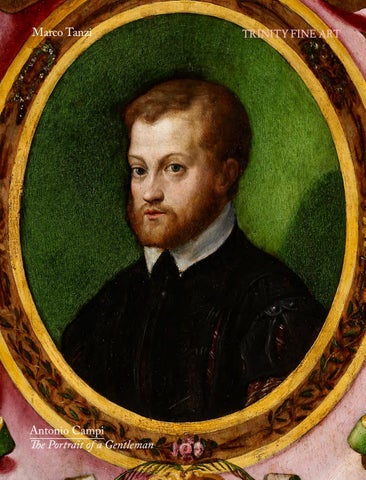 Antonio Campi The Portrait of a Gentleman 1

he painting is a half-bust portrait of a young gentleman aged about thirty and sporting a reddish beard. The bust is framed by a mock

cartouche in tones of pink and green.

The stylistic features are easy to identify, the picture displaying a series of

elements typical of the figurative culture of the Po Valley midway between Lombardy and Emilia, with a careful eye cannily trained on northern European

defined it.1 This superb picture is likely to have been painted in Cremona

either in, or shortly after, the middle of the century, according to the time

frame suggested by the style of the clothes worn by the gentleman. Yet the uncertainty surrounding the picture’s attribution that has dogged it throughout its history is understandable because a style developed in Cremona, particularly

in the field of portraiture, that managed to avoid taking notice of the situation

in neighbouring cities and to develop its own autonomous and unique artistic vocabulary.

The painting is by the hand of Antonio Campi, as we can tell from a comparison

with a number of portraits that have been added to the corpus of his works, starting with the Portrait of a Prelate in the Galleria Spada in Rome (inv. 182, fig. 1), which shares with our sitter not only certain salient stylistic features and details but also the open, contrite gaze and the magnificent green background 2

– the very same background, in fact, that we also find in an intense Portrait of an Ageing Gentleman now in a private collection in Piacenza (fig. 2).2

The attempt to reconstruct a corpus of portraits by Antonio Campi is a recent operation to which it is worth devoting a word or two. There were no known portraits per se by Antonio, while of those built into his religious works it was

possible to afford consideration only to the donor in his youthful Holy Family with St. Jerome and a Devout Donor (Guidobaldo Possevino) dated 1546 and

now in the church of Sant’Ilario.3 Yet the sources inform us that the painter

painted of Danese Filiodoni, one of the most influential figures in Spanish 4

Lombardy, a podestà of Cremona, a Senator and Grand Chancellor of the State of Milan.4 And there are also the models for the engravings for Cremona

fedelissima, of which Campi himself often tells us that they were «based on a drawing of mine from life» or words to that effect; and in one instance, for

the portrait of Buoso da Dovara, he says that it was: «taken from a portrait of

said Bosio, which is to be found in my workshop».5 And finally, portraits and

self-portraits attributed to Antonio are mentioned in collection inventories, for which one has but to read Federico Sacchi’s report.6 6

The attribution to Antonio Campi of the two portraits mentioned above, in

Rome and Piacenza, is borne out by a series of formal prerogatives and small but characteristic details which constantly crop up in his artistic output, almost like signatures.

There are various other portraits given to Antonio Campi which, on account

Fig. 3: Antonio Campi, Portrait of an Old Man with a Letter and Gloves, Cleveland Museum of Art, Cleveland

beard. If we but observe the shape of the head in the three-quarter pose or the

concentrated gaze turned towards the observer, as determined as it is gentle, 7

Fig. 4: Antonio Campi, Portrait of a Young Gentleman of the Piperari Family, with Agnew’s, London

of Tintoretto», but reassigned to Giulio Campi by Bernard Berenson in 1932.7

the time to the Venetian school of the 16th century, «very much in the manner

A comparison between the two faces, leaving aside the obvious difference in

the sitters’ ages, appears to be extremely cogent not only on account of the

formal similarities mentioned above but also for the watery depth of the gaze, 8

slightly askew, which forges a direct and close bond with the observer. There are also other portraits painted in the early part of Antonio’s career. In connection with the rapport between Cremona and Flanders, there is a Portrait of a Young

Gentleman of the Piperari Family dated 1556 (fig. 4), now with Agnew’s but sold on the London market more than once with an attribution to Jorge de la

Rúa, a Spanish painter of Flemish origin, or to Willem Key from Brabant, but

in my view definitely by the hand of Antonio Campi.8 We should emphasise

certain details – the typical shell-like conformation of young Piperari’s eyes, or the precise relationship between the strong nose and the arched eyebrows – which are echoed in our own painting, not to mention the way in which

the brilliant white collar stands out against the black and grey velvet. The volumes are modelled by a soft and delicate chiaroscuro, and it is

worth stressing the construction of the face through the harmonious

juxtaposition of colour in the combination of pinks, whites, greys and

umber, with rapid, gleaming highlights imparting a transparent feel to the skin, highlighting the delicate contrast with the subtly defined red

lips, beard and moustache. Other half-bust portraits can help to support the attribution of our painting to Antonio Campi thanks to the same

compositional and stylistic features as those described above, first and

Fig. 6 (opposite): Reverse of the panel with Minerva Threatening Cupid

but also a Young Lady in the Pinacoteca Nazionale in Bologna (inv. 4,

foremost a Gentleman in the Borromeo collection on the Isola Bella, fig. 5).9 The Isola Bella figure could well be the brother of our reddish

sitter but with a very black beard and hair, his gaze possibly a little more determined though certainly not haughty – possessed, rather, of

a certain thoughtful intensity – but his face is built in exactly the same way, including the hair receding slightly at the temples.

9 P. Plebani, in Collezione Borromeo. La Galleria dei Quadri dell’Isola Bella, ed. A. Morandotti and M. Natale, Cinisello Balsamo 2011, pp. 190-191, n. 37, as Lombard Painter, third quarter of the 16th century; A. Ghirardi, in Pinacoteca Nazionale di Bologna. Catalogo generale. 2. Da Raffaello ai Carracci, Venice 2006, n. 212, p. 322, as Bartolomeo Cesi, but with a more correct inscription on the stretcher frame: «Antonio Campi fece». This group also seems to include a Portrait of a Gentleman, identified as Ambrogio Spinola by an inscription on the back of the canvas, which was put up for auction at Antiquitaeten Baranyi in Grossengersdorf in Austria on 28 January 2016, lot no. 59.

We are assisted in defining the painting’s stylistic context and likely date, in addition to confirming the lofty quality of the work, by the picture on the back

of the small panel. The subject is extremely rare: Cupid is usually intent on shooting arrows, rather than receiving them as he is doing here.10

picture is likely to have been a nuptial gift from the groom to his future bride, with his portrait on one side and an allegory of a subject relating to love on the

other: in this instance, as we shall see below, we are looking at the mythological

sublimation of marital love, chaste rather than lustful, as a pledge of faithfulness. A passion for the Classical world and mythology and a decorative and

illusionistic taste underpin the illustration of the two sides of our small panel, closely linked to the devices of Torre Pallavicina and of Cadignano; but the same

are unknown but which I attributed to Antonio Campi a number of years ago (fig. 8).11 The portrait is set in a frame with «cartouches adorned with garlands

and large masks» like the Loves of the Gods, while Minerva and Cupid are

In continuity with the sources – for example Paris da Ceresara – in my text I use both Greek and Latin names for the divinities: Pallas-Minerva, Eros-CupidAmor, hoping not to trigger any confusion.

of Leda and the Swan frescoed in the room on the ground floor, with the hills sloping down to the lake lapped by the rosy light of Aurora, the dawn. The

presence of this typical imaginative landscape is a constant characteristic, like in The Three Marys at the Tomb, now in Potsdam (fig. 7).

It is worth noting the remarkable qualitative features, in this instance, of the small mythological scene on the reverse of the panel: the extreme sophistication

brushwork used to impart precious highlights to the meadow and the shrubs,

with the shifting variety of greens in the contrast between light and shade. Behind the goddess, the diaphanous depiction of Aurora’s chariot and its

reflection projected onto the water in golden strands, flooding the branches

and leaves of the small tree on the far left. And what of the shimmering moiré

golden yellow? Here we have an extremely delicate and virtuoso exercise which indelibly marks Antonio Campi’s best work in the Fontainbleau style towards the middle of the 16th century.

orn in Cremona between 1522 and

1523, Antonio Campi is likely to have trained under his elder brother

Giulio, with whom he was to work on several

occasions in the course of his career. His early work betrays an interest primarily in the models of Parmigianino, from which he

took his inspiration for a series of engravings, as well as in those of his elder brother and of Camillo Bocaccino, as we can see from his first

he worked with Giulio on the fresco decoration

of the vault in the church of Santa Margherita, and in 1549 on a series of eight canvases with Stories of Justice for the Palazzo della Loggia in

Brescia. In the 1550s he decorated a number of

rooms in Adalberto Pallavicinoâ&amp;#x20AC;&amp;#x2122;s villa in Torre Pallavicina and in the Palazzo

Maggi in Cadignano. Starting in 1560 he began to work partly in Milan, where he painted a monumental Resurrection of Christ for the church of Santa Maria presso San Celso in 1560, marking the start on an interest in naturalist illusionism of Roman inspiration; then in 1564 he frescoed the chancel of

the public church of San Paolo Converso with Stories from the Life of St. Paul. It was in these years that Antonio Campiâ&amp;#x20AC;&amp;#x2122;s art began to acquire the dramatic and spectacular tone which was to win him the patronage of Archbishop

Charles Borromeo, whose favourite painter he was eventually to become. 14

Subsequently, for the same church, Borromeo commissioned him to paint a complex painting with Stories from the Passion of Christ, dated 1569 and now

in the Louvre. Antonio also painted a Pietà for Cremona Cathedral in 1566, while the following decade was remarkable for a series of altarpieces in which he experimented with different expressive registers ranging from Mannerism

to painting from life. In Milan he painted a Beheading of St. John the Baptist in 1571 and a Martyrdom of St. Lawrence in 1581 for San Paolo Converso; a

triptych betraying northern European influence and motifs after Savoldo for

House of the Pharisee in the Chapel of St. John the Baptist in the church of San

Sigismondo in 1577, followed by a depiction of the biblical episode of Christ

a volume entitled Cremona fedelissima containing the history of his native city, which earned him a number of privileges. In his final years he continued to play

a leading role in figurative art in Milan, where he produced works of particular importance such as two large canvases with Stories from the Life of St. Catherine

Paola in Naples. Campi died in January 1587 while engaged in designing and

partly painting the illusionistic decoration of the vault of San Paolo Converso, a commission subsequently completed by his younger brother Vincenzo.

With Antonio Campi, Lombard painting acquired a new vitality made of naturalistic echoes and skilled luminism, the very characteristics of his art which Roberto Longhi argued were to form the core of Caravaggio’s style during his formative years in Lombardy.

Trinity Fine Art: ANTONIO CAMPI - The Portrait of a Gentleman