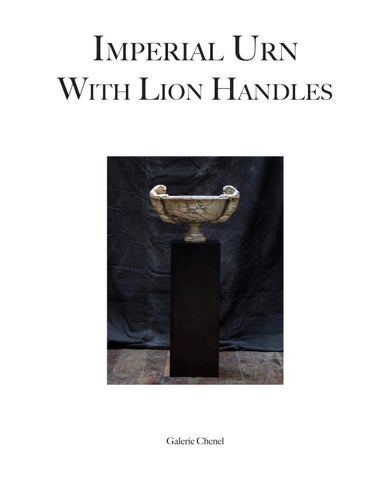 This extraordinary vase sculpted in pavonazzetto

bowl as if waiting to pounce. The dynamism is also

marble is undoubtedly a rediscovery of a masterpiece

accentuated by the great expressiveness emanating

dating from the Imperial Roman era. It presents

from the faces of the felines. Both animals are

a shallow but very flared circular basin, the edge

marked by a succession of several lines forming

defined - some of their teeth individually sculpted -

slight bulges. A large part of the majesty of the vase is

found in the decorated handles sculpted in the shape

incised, giving them an almost ferocious look. The

of felines. The two animals are represented hanging

muzzles are straight, framed by a pair of finely

on the bowl as if clinging to the rim. The front legs

sculptured round eyes flattened into their skulls,

are treated in a very realistic way, claws out, muscles

reinforcing this wild attitude and the feeling of

tensed while the back is marked with small incised

being in front of wild beasts. In addition, the cheeks

lines representing the thick fur. Thus, in vitality, the

representation of the front legs almost gives us the

marks. The bodies of the felines in tension are

impression that the two animals are hanging on the

represented in such elongation that they occupy the

entire height of the vase’s body. Their musculature

Our basin is exceptional for the treatment of its

is particularly developed at the shoulders but refined

decoration, both realistic and incredibly dynamic,

at the posterior of the animal, revealing the ribs

but also for the techniques and materials used.

under the skin. All of these details demonstrate the

Indeed, it is carved in a single block of colored

virtuosity of the artist in the realistic treatment of

marble commonly referred to as pavonazzetto or

the bodies. The animals’ bodies, sculpted in the

same block of marble as the basin, shows a sort of

white marble has veins of dark blue, black, and purple

hollowing between their belly and the surface of the

shades. As its name indicates, it comes from Phrygia

bowl, which gives a more elegant and refined look

in Asia Minor, more precisely from the quarries of

to the object. This shows the real technical prowess

references to the exploitation of these quarries

The center of the basin is decorated with a circular

date back to the 1st century BC, when owned

element imitating the ornamentation of certain

by the Imperial family. The emperor Augustus

imported a certain quantity of colored marble for

echoes the refinement and delicacy of execution

the renovation of his villa on the Palatine hill but

used here in the decoration of our bowl. Finally, the

also for the construction of public monuments, in

ensemble rests on a circular pedestal attached to a

particular in the Imperial Forum. It was mainly at

square base, which dates from a later period.

the end of the 1st century and beginning of the 2nd century AD that colored marble arrived in large quantities in Rome before being used more widely in architecture and sculpture. Appreciated for its aesthetic appeal, colored marble also became a symbol of the power of the Roman Empire and their conquests extending to Asia Minor. Pavonazzetto marble is therefore considered exotic and, for example, used in sculptures to represent the colored clothes of enemies captured during conquests or in the representation of animals such as panthers (ill. 2-3). The use of this marble with its particular nuances and the apparent size of the object itself proves that

the patron was highly likely to be a notable person in the Roman society.

examples in porphyry, breccia marble or Phrygian marble are today exhibited in various museums (ill. 4). These basins were generally made by workshops in the provinces of Rome and then imported into the capital. This hypothesis was in fact put forward following the discovery of a shipwreck in Punta Scifo, Southern Italy, containing numerous basins, mainly carved in pavonazzetto marble most likely from Asia Minor. These basins, with Ill. 2. Kneeling captive, Roman, 1st century AD, pavonazzetto

their simple shape and lack of any ornament, were

that realized the decorations known today thanks to

the examples that remain.

Our vase can be compared to the large roundrimmed vases commonly called labrums. These basins were generally used by the Romans to contain water in the thermal chambers of the baths but could also decorate the atriums of ancient villas.

Of various sizes, they are often sculpted in colored

marbles such as pavonazzetto, symbol of the pomp

and prosperity of the Empire at the time. Beautiful

The decoration of our vase is concentrated in the incredible representation of felines in place of the handles. The two animals, whether panthers or lions, can be linked to the iconographic universe of Dionysus and his Dionysian cult. Indeed, on certain reliefs linked to this cult, it is common to see felines, often panthers, trying to drink from basins or kraters. Thus, this type of scene most likely influenced sculptors of the time, giving rise to this type of object. A beautiful drawing by Giovanni Piranesi of an ancient marble urn also shows two decorated handles in the shape of dogs, thus again displaying the Romans’ interest for the representation of animals as handles (ill. 5). Furthermore, a Near Eastern influence could possibly be found in a vase by taking the fine example of a Syrian foundation

nail, dated from 2200-2100 BC, conserved in the Louvre Museum in Paris, which repeats the motif of a lion clutching rim (ill. 6). A magnificent pavonazzetto krater discovered in the region of Petra which very closely resembles our basin is a perfect example of this type of object, so dear to the Romans (ill. 7). But the closest example to our basin is undoubtably the one in the Isabella Stewart Gardner collection (ill. 8-10). Of an almost identical shape, the bowl is dated between 170-210 AD, is also sculpted in

pavonazzetto marble, and shows the same type of

Our object is undoubtedly a rediscovery of an important vase from the Imperial Roman era. It is the third example of a very unique type of vase, two of which are already known (ill. 7 and 8). Amongst these three examples, similarities of proportions, material, the feline-shaped handles, the quality of execution and the anatomic accuracy that can be witnessed in the animal sculptures, allows us to imagine that these vases could originate from the same workshops. We could even suppose that our vase, once upon a time, may form a pair with the Boston one and imagine them together inside a Roman villa like the Villa Hadriana at Tivoli (ill. 11). They would have been a perfect example

Ill. 9. Details of the two lions of the Isabella Stewart Gardner Museum bowl.

of the distinguished Roman taste. Separated thereafter, they each followed their own story, and underwent different restorations.

Ill. 10. The Lion Bowl displayed within the objects of Isabella Stewart Gardner’s collection in Boston.

Ill. 11. Fantasy reconstitutions with our vase inside a Roman villa.

The exceptional state of conservation of our vase confirms that it was found in a European collection very early, probably during the Renaissance. This hypothesis is supported by the restorations of the pedestal and part of the lips, which present a neo-classical aesthetic from the 18th century. Most recently, our bowl was in an old American collection before it was sold at Sotheby’s, formerly ParkeBernet Galleries, in 1967 under lot 7. It was then catalogued as “Hispano-Moresque marble urn, 15th

century AD”. It later joined an American collection and remained there by descent until the present day.

On the face of the first animal, there are remains of chisel marks along the whiskers and cheeks. This area, which has never been repolished, shows the amazing work of the Roman sculptor from the 2nd century AD. On the second animal, the chisel marks on the whiskers and at the fur of the paws are a fine testimony to the work of the Roman sculptor.

Despite some repolishing, the musculature is particularly pronounced at the shoulders but more refined towards the lower half of the torso, revealing the ribs under the skin. All of these details demonstrate the virtuosity of the artist in the realistic treatment of the bodies.

The chisel marks in the corners of the eyes and at the muzzles of the animals help us to confirm a dating to the Hadrianic period.

The original antique surface without any repolishing appears again between the two legs of the second animal and the water supply system is still visible.

The center of the basin is decorated with a circular element, testimony of the the refinement and delicacy of execution used here in the decoration of our bowl.

Given the decorative character of the objects, it is interesting to see that both vases were originally drilled through their bodies to be used as water fountains by the Romans. The same treatment can be seen in the Garnder Museum example (on the right) and ours (on the left).

No part of this publication may be transmitted in any form or by any means, electronic or mechanical, including photocopy, recording or any storage or retrieval system, without prior permission from the copyright holders and publishers.