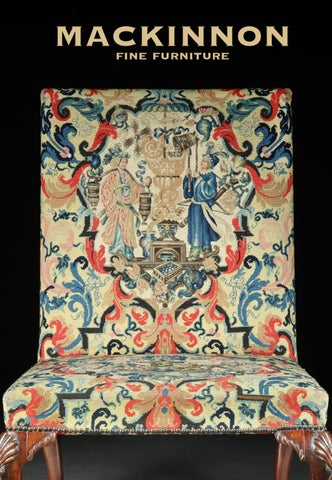 The Hanbury Hall Mahogany Side Chairs attributed to william hallett england, circa 1735

An exceptional pair of George II mahogany side chairs attributed to William Hallett. The seat covers with early eighteenth century French needlework, worked in polychrome wools and silks in gros-point and petit-point, the backs with a vertical cartouche enclosing chinoiserie figures flanking a very unusual wine press and surrounded by accessories, and the seats with a horizontal cartouche enclosing an elaborate water cistern flanked by exotic animals, surrounded by exuberant scrolling leaves, against a cream coloured ground, worked in gros-point. Each chair standing on magnificent mahogany cabriole legs to the front and rear terminating in ball-and-claw feet, with concealed brass and leather castors. The front legs carved to the knees with shells and each with a carved mahogany ring collar to the ankle. The needlework believed to be original to the chairs. Photographed in situ at Hanbury Hall, Worcestershire and later at Upton House, Warwickshire.

The Design &amp; Upholstery These chairs are attributed to the cabinetmaker William Hallett (1707-1781) because of striking stylistic similarities to a known suite of walnut seat furniture by Hallett supplied to Arthur Ingram, 6th Viscount Irwin (1689-1736). This suite incorporates almost identical carved scallop motifs and ringed claw and ball feet. The finely worked early eighteenth century French needlework attributed to the workshop of the tapissier Planqué at St. Cyr features three recurring designs within cartouches of figures

and mythical creatures. The inspiration for these scenes come from Chinese woodblock prints and porcelain ornamentation from the Kangxi period (1662-1722). In her seminal publication, The Upholstered Furniture in the Lady Lever Art Gallery (2008), Lucy Wood suggests that the needlework is original to the chairs. She notes that the panels fit ‘remarkably well’ and that the English frames may have been made to fit the imported panels.

One of the chairs from the suite supplied by William Hallett to Arthur Ingram.

Hanbury Hall This very fine pair of chairs has an interesting and illustrious history, tracing back to two distinguished houses. The chairs are photographed in situ at Hanbury Hall, Worcestershire, circa 1916 along with other pieces from the suite, which comprises of six chairs, one wing armchair, and one sofa. Hanbury Hall was the residence of the Vernon family since 1631. The original Georgian furnishings of the hall do not survive because of a scandal within the family. Emma Vernon (1755-1818) inherited the hall in 1771, but when she eloped with the local curate, her husband Henry Cecil closed the hall and sold all of the furniture and art. Emma returned to the hall in

1804 with her third husband and proceeded to redecorate the hall, at which point the she may have acquired the present pair of chairs. However, as the suite of seat furniture does not appear in the 1840 inventory of the hall, it is more likely that the suite of furniture was acquired as part of the collection of Thomas Bowater Vernon (1832-1859), who renovated and altered the hall between 1856 and 1859. Alternatively, his brother, Sir Harry Foley Vernon, 1st Baronet (1834-1920) may have acquired the suite after he inherited the hall upon his brotherâ&amp;#x20AC;&amp;#x2122;s death in 1859.

Upton House The suite of furniture was sold when Sir Harry died in 1920, at which point it was acquired for Upton House, Warwickshire by Walter Samuel, 2nd Viscount Bearsted (1882-1948). Bearsted was the chairman of Shell Oil, which had been founded by his father. In addition to being a great philanthropist, Bearsted was incredibly knowledgeable about art and served as the Chairman of the National Gallery as well as acting as a Trustee of the Tate Gallery and Whitechapel Art Gallery. He amassed an incredible collection of paintings and porcelain during his lifetime, as well as a notable collection

of English furniture that included the exceptional â&amp;#x20AC;&amp;#x2DC;Apolloâ&amp;#x20AC;&amp;#x2122; giltwood side tables attributed to Benjamin Goodison from Stowe. Bearsted bought Upton House in 1927, and the suite of seating furniture is photographed in situ in 1936. A great deal of his collection went to the National Trust upon his death in 1948, however the suite of seat furniture remained with the family until 1998.