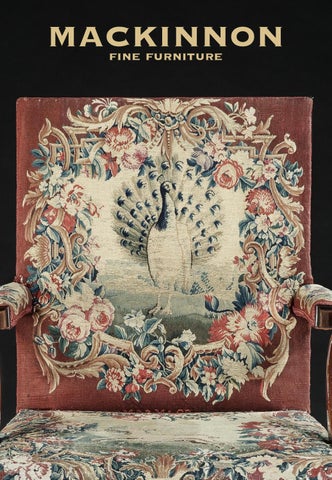 The Newhailes Library Armchairs attributed to william vile An exceptional and highly important pair of George II mahogany armchairs retaining their original Aubusson tapestry seat covers attributed to William Vile. Each chair with a rectangular back and seat upholstered with tapestry covers. The tapestry padded mahogany outswept arms with handrests terminating with carved flower-heads, and the moulded, sloping supports with carved ‘gothic’ panels, scrollwork, and beading. Each chair standing on outstanding pierced and fretted square-section legs carved with floral garlands and terminating in guttae feet. The legs joined by elaborate chinoiserie pierced fretwork stretchers. The outstanding Aubusson tapestry panels worked with strapwork cartouches interwoven with scrolling leaves and brightly coloured summer flowers on a claret ground, the cartouches on the backs depicting a peacock and flying stork, the seats with a leaping deer and a fox. The seat covers signed by Pierre Mage. Photographed in situ at Newhailes House, Scotland. Height: 44 in (112 cm) Width: 30¼ in (77 cm) Depth: 24 in (61 cm)

Exhibited ‘Loan Exhibition of French and English Art Treasures of the Eighteenth Century,’ New York, 1942, no. 471.

Newhailes &amp; the Dalyrmple Family General the Hon. James St. Clair (1688-1762) married Janet Dalrymple (1698-1766), the youngest daughter of Sir David Dalrymple, 1st Baronet, in 1745. Ten years earlier, in 1735, he had acquired Rosslyn Castle, in Midlothian, Scotland. He was sent on a special envoy to Vienna and Turin in 1748 and brought along his aides David Hume, the famous historian, and his nephew, Sir Harry Erskine. St. Clair died in 1762 and was outlived by his wife Janet, who moved to 60 Greek Street in London after her husband’s passing.

Court of Session and lived at Newhailes, near Edinburgh.

The chairs were photographed in situ in the library of Newhailes in Country Life. The library was one of the most impressive spaces in the house. The family amassed a book collection of over 7,000 volumes that was widely admired, with Dr. Samuel Johnson referring to the library as ‘the most learned room in Europe.’

Newhailes, now owned by the National Trust of Scotland, is an incredible survival of the Scottish Enlightenment. It was originally built by the architect James Smith (1645-1731) for his own residence, and was known as Broughton House. In 1709, Sir David Dalrymple, 1st Baronet (Janet’s father) acquired the house and renamed it Newhailes in recognition of Hailes Castle, the family estate in East Linton.

The library at Newhailes showing two of the armchairs with Aubusson tapestries in situ. (previous overleaf) Newhailes, Scotland.

The Chair Frames Although the maker of the chairs is unknown, likely candidates include William Bradshaw (17001775), William Vile (1700-1767), and Thomas Chippendale (1718-1779). Bradshaw was a cabinet-maker with a tapestry workshop at 59 Greek Street—a neighbour of Janet Darymple. He was predominantly an upholsterer but is also known to have supplied furniture earlier in his career during the 1730s and 1740s, including a suite of twelve armchairs and two sofas with tapestry covers commissioned by the 2nd Earl Stanhope for the Carved Room at Chevening, Kent in 1736-37. He also supplied a set of four armchairs upholstered in Soho tapestry to the fourth Earl of Chesterfield at Chesterfield House, London. George II mahogany armchair attributed to William Vile made for the 4th Earl of Shaftesbury at St. Giles, Dorset. Victoria &amp; Albert Museum.

Given the later date of these chairs, circa 1755, it is more likely that the chairs themselves were made by one of the leading cabinet-makers established on nearby St. Martin’s Lane, such as William Vile or Thomas Chippendale himself. It is of course possible that they may have been subsequently upholstered in the Bradshaw workshops. William Vile was almost certainly the cabinetmaker commissioned to create the related superlative suite of mahogany seat furniture for the drawing room of the 4th Earl of Shaftesbury at St. Giles House, Dorset. The entwined floral garlands and guttae feet along with the carved floral terminals on the down-swept arms are very similar in both the St Giles’s chairs and the Newhailes set. The exceptional carving on both suites is clearly the work of a master craftsman, and Vile is the most plausible. George II mahogany armchair attributed to William Vile. Metropolitan Museum of Art.

The Tapestries The chairs are covered in their outstanding signed crimson-coloured Aubusson tapestries. The signature ‘M. R. D. Mage’ likely refers to Pierre Mage, who worked at the Aubusson manufactory from 1697-1747. The Mage family of weavers goes back to François Mage, who is recorded as early as 1585. Pierre Mage had a workshop in Paris in the rue de la Huchette and worked alongside Jean-François Picon. The depiction of birds on each seat back is designed in the manner of Jean-Baptiste Oudry. Oudry was renowned for his depictions of the

natural world. Between 1729 and 1734, he produced 276 drawings illustrating Jean de la Fontaine’s Fables choisies mises en vers depicting a vast array of animals, including a magnificent peacock (illustrated below). It is quite possible General St. Clair brought the tapestries back from Paris himself, perhaps on his way home from Vienna. The other possibility is that Janet St. Clair purchased the tapestries from her neighbours in Greek Street, the Bradshaw workshops, who were known to carry Aubusson tapestries in stock.

Walter P. Chrysler, Jr. Walter P. Chrysler, Jr. (1909-1988) was one of the leading art collectors in 20th century America. He devoted his life to building a collection of art after touring Europe as a young man and became acquainted with several contemporary artists, including Picasso, Braque, and Matisse. In addition to collecting modern art, Chrysler was adventurous in his collecting habits and often ‘bought against fashion.’

Chrysler lived in Virginia at North Wales and once retired, he focused his work on the Norfolk Museum of Arts and Sciences in Norfolk, Virginia, which has been renamed the Chrysler Museum. The New York Times wrote that in 1971 ‘he made the gift that is one of the strongest and most various ever given at any one time by a single individual to an American museum.’