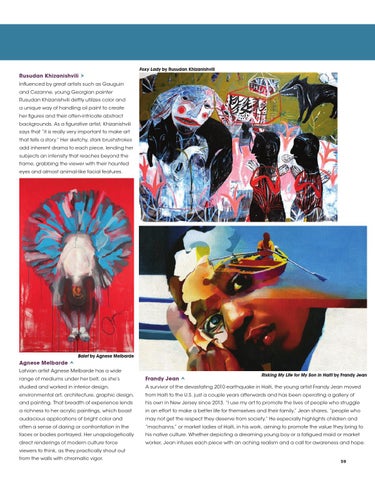 Rusudan Khizanishvili  Influenced by great artists such as Gauguin and Cezanne, young Georgian painter Rusudan Khizanishvili deftly utilizes color and a unique way of handling oil paint to create her figures and their often-intricate abstract backgrounds. As a figurative artist, Khizanishvili says that “it is really very important to make art that tells a story.” Her sketchy, stark brushstrokes add inherent drama to each piece, lending her

subjects an intensity that reaches beyond the frame, grabbing the viewer with their haunted eyes and almost animal-like facial features.

Risking My Life for My Son in Haiti by Frandy Jean

range of mediums under her belt, as she’s

studied and worked in interior design,

A survivor of the devastating 2010 earthquake in Haiti, the young artist Frandy Jean moved

from Haiti to the U.S. just a couple years afterwards and has been operating a gallery of

and painting. That breadth of experience lends

his own in New Jersey since 2013. “I use my art to promote the lives of people who struggle

a richness to her acrylic paintings, which boast

in an effort to make a better life for themselves and their family,” Jean shares, “people who

audacious applications of bright color and

may not get the respect they deserve from society.” He especially highlights children and

often a sense of daring or confrontation in the

“machanns,” or market ladies of Haiti, in his work, aiming to promote the value they bring to

faces or bodies portrayed. Her unapologetically

his native culture. Whether depicting a dreaming young boy or a fatigued maid or market

worker, Jean infuses each piece with an aching realism and a call for awareness and hope.

viewers to think, as they practically shout out from the walls with chromatic vigor. 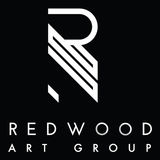