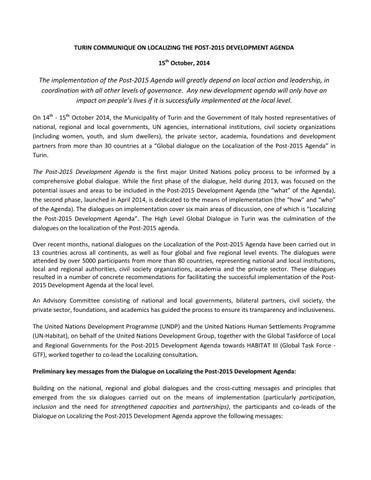 Local and Regional Governments (LRGs) are essential for promoting inclusive sustainable development within their territories and, therefore, are necessary partners in the implementation of the Post-2015 agenda.

Effective local governance can ensure the inclusion of a diversity of local stakeholders, thereby creating broad-based ownership, commitment and accountability.

An integrated multi-level and multi-stakeholder approach is needed to promote transformative agendas at the local level.

Strong national commitment to provide adequate legal frameworks and institutional and financial capacity to local and regional governments is required.

Encourage the Post-2015 agenda to stress the importance of establishing environments that unlock the development potential of local and regional governments and local stakeholders by creating an enabling institutional framework at all levels and by localizing resources and ensuring territorial approach for sustainable development.

Further call for the redoubling of efforts to include reliable targets and indicators for the SDGs that respond to local contexts, needs and concerns, in order to foster transparency and accountability.

The participants and co-leads of the Dialogue on Localizing the Post-2015 Development Agenda also: -

Underline the importance of establishing sustainable financing mechanisms to localize the global development agenda and build responsive and accountable local institutions. This includes the full and effective participation of local governments in public expenditure allocation through fiscal decentralization, as well as new forms of financing for local development.

Underscore the importance of strengthening capacity building programmes and of the role of territorial development approaches in facilitating integrated planning for effective transformative agendas at the local level.

Recognize the need for multilevel and multi-stakeholder approaches that will allow all relevant stakeholders to participate in the implementation of the development agenda of their respective territories and, thus, strengthen local ownership of the localization process. Specific emphasis should be put on inclusive and participatory processes that allow local and regional governments to engage with the private sector and civil society, including distinctive local cultures, particularly of indigenous peoples, migrants,

minorities, traditionally excluded groups, as well as traditional institutions and authorities, in a meaningful and effective way. -

Promote pilot initiatives to demonstrate the added value of LRGs in the monitoring and implementation of the SDGs in low, middle and high income countries, including small island developing states, and scale-up existing good practices and innovations for localization.

Call for the acknowledgement of decentralized cooperation, particularly through direct exchanges between local and regional governments, and south-south cooperation initiatives to support the localization of the SDGs.

As this process unfolds, the UNDP, UN-Habitat and the Global Taskforce of Local and Regional Governments are committed to continue to collaborate with national and local partners to strengthen the global partnership for the Localization of the Post-2015 Development Agenda; we express our willingness to advocate for and work towards the implementation of the Post-2015 agenda at the local level. This way forward for the Localization of the Post-2015 Development Agenda will have to be closely linked to next steps of the entire Post-2015 process, whilst taking into consideration other global agendas and the existing strong crosscutting linkages among them, e.g. the Global Partnership for an Effective Development Cooperation and the Third United Nations Conference on Housing and Sustainable Urban Development (Habitat III). Turin, 15th October, 2014

Final High Level Global Dialogue on Localizing the Post 2015 Agenda. Dialogues on Implementation of the post 2015 Agenda. October 14-15, 2014 - Turin (Italy). The dialogue process is co-lead by UNDP, UN-Habitat and the Global Task Force of Local and Regional Governments. 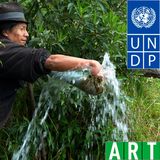