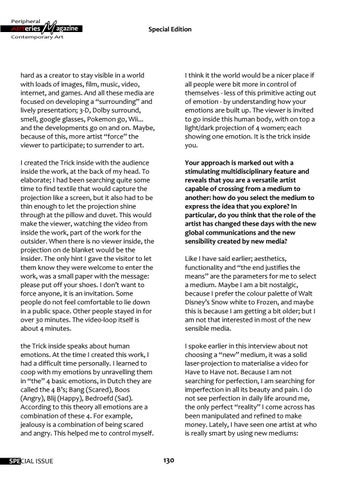 hard as a creator to stay visible in a world with loads of images, film, music, video, internet, and games. And all these media are focused on developing a “surrounding” and lively presentation; 3-D, Dolby surround, smell, google glasses, Pokemon go, Wii... and the developments go on and on. Maybe, because of this, more artist “force” the viewer to participate; to surrender to art.

I think it the world would be a nicer place if all people were bit more in control of themselves - less of this primitive acting out of emotion - by understanding how your emotions are built up. The viewer is invited to go inside this human body, with on top a light/dark projection of 4 women; each showing one emotion. It is the trick inside you.

I created the Trick inside with the audience inside the work, at the back of my head. To elaborate; I had been searching quite some time to find textile that would capture the projection like a screen, but it also had to be thin enough to let the projection shine through at the pillow and duvet. This would make the viewer, watching the video from inside the work, part of the work for the outsider. When there is no viewer inside, the projection on de blanket would be the insider. The only hint I gave the visitor to let them know they were welcome to enter the work, was a small paper with the message: please put off your shoes. I don’t want to force anyone, it is an invitation. Some people do not feel comfortable to lie down in a public space. Other people stayed in for over 30 minutes. The video-loop itself is about 4 minutes.

Your approach is marked out with a stimulating multidisciplinary feature and reveals that you are a versatile artist capable of crossing from a medium to another: how do you select the medium to express the idea that you explore? In particular, do you think that the role of the artist has changed these days with the new global communications and the new sensibility created by new media? Like I have said earlier; aesthetics, functionality and “the end justifies the means” are the parameters for me to select a medium. Maybe I am a bit nostalgic, because I prefer the colour palette of Walt Disney’s Snow white to Frozen, and maybe this is because I am getting a bit older; but I am not that interested in most of the new sensible media.

the Trick inside speaks about human emotions. At the time I created this work, I had a difficult time personally. I learned to coop with my emotions by unravelling them in “the” 4 basic emotions, in Dutch they are called the 4 B’s; Bang (Scared), Boos (Angry), Blij (Happy), Bedroefd (Sad). According to this theory all emotions are a combination of these 4. For example, jealousy is a combination of being scared and angry. This helped me to control myself.

I spoke earlier in this interview about not choosing a “new” medium, it was a solid laser-projection to materialise a video for Have to Have not. Because I am not searching for perfection, I am searching for imperfection in all its beauty and pain. I do not see perfection in daily life around me, the only perfect “reality” I come across has been manipulated and refined to make money. Lately, I have seen one artist at who is really smart by using new mediums: