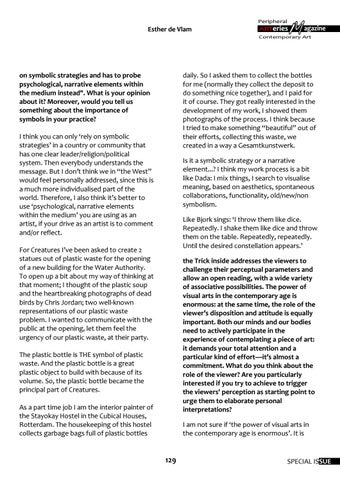 on symbolic strategies and has to probe psychological, narrative elements within the medium instead". What is your opinion about it? Moreover, would you tell us something about the importance of symbols in your practice?

daily. So I asked them to collect the bottles for me (normally they collect the deposit to do something nice together), and I paid for it of course. They got really interested in the development of my work, I showed them photographs of the process. I think because I tried to make something “beautiful” out of their efforts, collecting this waste, we created in a way a Gesamtkunstwerk.

I think you can only ‘rely on symbolic strategies’ in a country or community that has one clear leader/religion/political system. Then everybody understands the message. But I don’t think we in “the West” would feel personally addressed, since this is a much more individualised part of the world. Therefore, I also think it’s better to use ‘psychological, narrative elements within the medium’ you are using as an artist, if your drive as an artist is to comment and/or reflect.

Is it a symbolic strategy or a narrative element...? I think my work process is a bit like Dada: I mix things, I search to visualise meaning, based on aesthetics, spontaneous collaborations, functionality, old/new/non symbolism. Like Bjork sings: ‘I throw them like dice. Repeatedly. I shake them like dice and throw them on the table. Repeatedly, repeatedly. Until the desired constellation appears.’

For Creatures I’ve been asked to create 2 statues out of plastic waste for the opening of a new building for the Water Authority. To open up a bit about my way of thinking at that moment; I thought of the plastic soup and the heartbreaking photographs of dead birds by Chris Jordan; two well-known representations of our plastic waste problem. I wanted to communicate with the public at the opening, let them feel the urgency of our plastic waste, at their party.

the Trick inside addresses the viewers to challenge their perceptual parameters and allow an open reading, with a wide variety of associative possibilities. The power of visual arts in the contemporary age is enormous: at the same time, the role of the viewer’s disposition and attitude is equally important. Both our minds and our bodies need to actively participate in the experience of contemplating a piece of art: it demands your total attention and a particular kind of effort—it’s almost a commitment. What do you think about the role of the viewer? Are you particularly interested if you try to achieve to trigger the viewers' perception as starting point to urge them to elaborate personal interpretations?

I am not sure if ‘the power of visual arts in the contemporary age is enormous’. It is