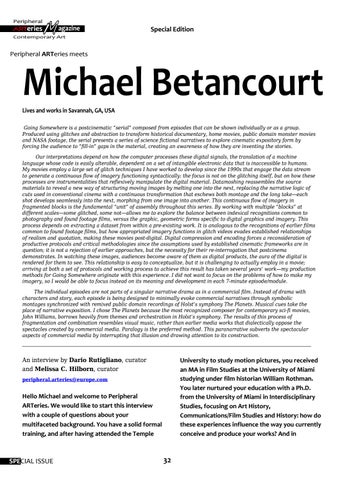 Michael Betancourt Lives and works in Savannah, GA, USA Going Somewhere is a postcinematic “serial” composed from episodes that can be shown individually or as a group. Produced using glitches and abstraction to transform historical documentary, home movies, public domain monster movies and NASA footage, the serial presents a series of science fictional narratives to explore cinematic expository form by forcing the audience to “fill-in” gaps in the material, creating an awareness of how they are inventing the stories. Our interpretations depend on how the computer processes these digital signals, the translation of a machine language whose code is easily alterable, dependent on a set of intangible electronic data that is inaccessible to humans. My movies employ a large set of glitch techniques I have worked to develop since the 1990s that engage the data stream to generate a continuous flow of imagery functioning syntactically: the focus is not on the glitching itself, but on how these processes are instrumentalities that reflexively manipulate the digital material. Datamoshing reassembles the source materials to reveal a new way of structuring moving images by melting one into the next, replacing the narrative logic of cuts used in conventional cinema with a continuous transformation that eschews both montage and the long take—each shot develops seamlessly into the next, morphing from one image into another. This continuous flow of imagery in fragmented blocks is the fundamental “unit” of assembly throughout this series. By working with multiple “blocks” at different scales—some glitched, some not—allows me to explore the balance between indexical recognitions common to photography and found footage films, versus the graphic, geometric forms specific to digital graphics and imagery. This process depends on extracting a dataset from within a pre-existing work. It is analogous to the recognitions of earlier films common to found footage films, but how appropriated imagery functions in glitch videos evades established relationships of realism and quotation, making these movies post-digital. Digital compression and encoding forces a reconsideration of productive protocols and critical methodologies since the assumptions used by established cinematic frameworks are in question; it is not a rejection of earlier approaches, but the necessity for their re-interrogation that postcinema demonstrates. In watching these images, audiences become aware of them as digital products, the aura of the digital is rendered for them to see. This relationship is easy to conceptualize, but it is challenging to actually employ in a movie; arriving at both a set of protocols and working process to achieve this result has taken several years’ work—my production methods for Going Somewhere originate with this experience. I did not want to focus on the problems of how to make my imagery, so I would be able to focus instead on its meaning and development in each 7-minute episode/module. The individual episodes are not parts of a singular narrative drama as in a commercial film. Instead of drama with characters and story, each episode is being designed to minimally evoke commercial narratives through symbolic montages synchronized with remixed public domain recordings of Holst’s symphony The Planets. Musical cues take the place of narrative exposition. I chose The Planets because the most recognized composer for contemporary sci-fi movies, John Williams, borrows heavily from themes and orchestration in Holst’s symphony. The results of this process of fragmentation and combination resembles visual music, rather than earlier media works that dialectically oppose the spectacles created by commercial media. Paralogy is the preferred method. This paranarrative subverts the spectacular aspects of commercial media by interrupting that illusion and drawing attention to its construction.

University to study motion pictures, you received an MA in Film Studies at the University of Miami studying under film historian William Rothman. You later nurtured your education with a Ph.D. from the University of Miami in Interdisciplinary Studies, focusing on Art History, Communications/Film Studies and History: how do these experiences influence the way you currently conceive and produce your works? And in

Hello Michael and welcome to Peripheral ARTeries. We would like to start this interview with a couple of questions about your multifaceted background. You have a solid formal training, and after having attended the Temple