Interview of an Artist: Mary-Frances Burt 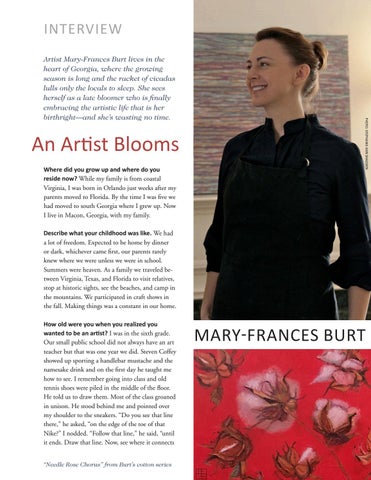 An Artist Blooms | Where did you grow up and where do you reside now? While my family is from coastal Virginia, I was born in Orlando just weeks after my parents moved to Florida. By the time I was five we had moved to south Georgia where I grew up. Now I live in Macon, Georgia, with my family.

Artist Mary-Frances Burt lives in the heart of Georgia, where the growing season is long and the racket of cicadas lulls only the locals to sleep. She sees herself as a late bloomer who is finally embracing the artistic life that is her birthright—and she’s wasting no time.

Describe what your childhood was like. We had a lot of freedom. Expected to be home by dinner or dark, whichever came first, our parents rarely knew where we were unless we were in school. Summers were heaven. As a family we traveled between Virginia, Texas, and Florida to visit relatives, stop at historic sights, see the beaches, and camp in the mountains. We participated in craft shows in the fall. Making things was a constant in our home. How old were you when you realized you wanted to be an artist? I was in the sixth grade. Our small public school did not always have an art teacher but that was one year we did. Steven Coffey showed up sporting a handlebar mustache and the namesake drink and on the first day he taught me how to see. I remember going into class and old tennis shoes were piled in the middle of the floor. He told us to draw them. Most of the class groaned in unison. He stood behind me and pointed over my shoulder to the sneakers. “Do you see that line there,” he asked, “on the edge of the toe of that Nike?” I nodded. “Follow that line,” he said, “until it ends. Draw that line. Now, see where it connects “Needle Rose Chorus” from Burt’s cotton series

to the next line?â&amp;#x20AC;? He talked me through the whole sneaker. I was astonished to see a believable representation of the shoe appear on my paper. It was like magic. Art came alive for me then.

Do you have any artistic connections in your family? There are many. My great grandmother started painting at 80 and painted hundreds of canvases before she died. I have a few of them hanging in my house and I wish I had all of them. The women in my family are skilled seamstresses. From them I learned to think abstractly and how to tailor a 3D shape by joining flat pieces of material. My grandfather was a photoengraver. For better or worse, I inherited his ability to see minute flaws. While my uncle did not pursue art as a career, I admired his paintings. He used a palette knife and I liked tracing the dried ridges of paint on the canvas with my fingers. He was the one who gave me a set of acrylic paints. We always had drawing supplies but it was my first set of real paints. My mother taught oil painting for many years. I learned mixing colors and brushwork from her. My father is a craftsman of all sorts. The first stained glass window he made is three panels, five feet wide, and is now installed in my home. One of my sisters is an artist as well. She studied graphic design at SCAD, graduating first in her class. My younger sister owns a successful advertising company and while she professes to love crunching numbers, I have seen her pick up a brush and complete a painting for her home simply because she could not find what she wanted. What is your educational background and artistic training? I have a BFA in graphic design from the University of Georgia â&amp;#x20AC;&amp;#x201C; Lamar Dodd School of Art. Since then I have worked as a designer in the publishing industry. Over the years I have taken a variety of art and art-related classes as the practice of graphic design has lost contact with the handwork I loveâ&amp;#x20AC;&amp;#x201D;workshops in jewelry making,

mosaics, and millinery, and more recently, private instruction in oil painting and acrylic painting. What is the inspiration for your work? Beautiful shapes and balanced asymmetrical compositions grab me. Negative space is quite important to me so when I see what’s “not there” and how that enhances what “is there,” then “I’m there.” I love watching how light changes. The physics of color intrigues me. Just recently in a discussion with my mother, she asked me how I choose my colors. I said, “I paint the colors I see,” and then we realized we see color differently. That fascinates me.

Why did you choose your subject matter? I love flowers and gardens. I’m not a gifted gardener so when something blooms I’m very excited about it. I love documenting all the growing stages of a flowering plant. Leaves, pods, buds, and dripping petals are heavenly.

to have an idea of where I want to take things. Fully embracing myself as an artist was a slow awakening and the light really came on around the time I became a parent. Using acrylics instead of oils was a practical decision. Frequent interruptions led to using pastels at the early stages of a piece and finishing with paint. This meant I could stop and start as needed without much waste and cleanup. Time was precious so I began doing Morning Sketches with pastels on newsprint. It was amazing how much better the day went when it began with drawing. I started taking private painting lessons because I was painting in my dreams and I’d wake up with the crushing realization that it wasn’t real. Painting while awake is far better!

What kinds of studio spaces have you had in the past? Where is your studio now? Before I had an entire room to myself, I’d make a space wherever I could. In college I took over a study room in the dorm. In my current house, I intially took an upstairs room we call “The Tree House.” My studio is now the ground level. There are windows on two sides that give me an idea of what time of day it is, something I lose track of when I’m painting! How did you develop your technique? My technique is grounded in illustration. As a graphic designer I have been illustrating for a variety of projects for twenty five years now. Work in graphic markers, color pencil, charcoal, watercolor, and cut paper silhouettes have regularly appeared in my work over the years. Trained under the mantra to “do more sketches,” I don’t start a painting without working through possible compositions. I throw myself completely into researching a subject—I expect things to change once I begin—it’s simply nice

Who are your major influences? Maxfield Parrish, Norman Rockwell, and the Impressionists on both sides of the ocean are some of the artists I admire. Parrish, because his early profession as a commercial artist and his desire to transition to fine art is something I can identify with; Rockwell, for his ability to tell a story; the Impressionists, (Continued on next page)

for their representation of light and color and a commitment to work that predated acceptance by the public; Alexander Calder, for his use of shapes and colors; Magritte, for his odd charm; Hopper for mood. I’m drawn to each of them for different reasons. What recognition have you received? I received a Gold ADDY for illustration and many Gold ADDYs for design. Recently I was awarded a grant for a public mural to be painted at the bus terminal. “A Celebration of Grace” was completed in March. It was included in the April 2018 issue of Georgia Magazine. Since then it has been a place on the map for social media photos. What shows have you been featured in? Until 2018, I had participated in group shows. My first solo show was in February of this year, selling 20 of the 23 pieces shown. The next month I was in an annual group show. Three of my four entries sold. The response has been encouraging. Since then I’ve stayed busy with commissions with plans to have another solo show next year. What are your interests outside of painting? I enjoy writing. In the past I have written for a local magazine and a newspaper. Pulitzer prize winner Annie Dillard said she couldn’t decide between being an artist or a writer and decided to be a writer because then she could sit down. Personally, I’d

rather be moving and I love the physical aspect of painting, especially at a large scale. I also enjoy gardening, which for me means planting things and hoping they make it. It’s an excuse to be outdoors to soak up all that light and color. Currently, you are not a full time artist. Describe your non-art work, and how you feel it relates to your art. My husband and I are book designers and together have worked on more than 500 book projects, designing covers and interiors. It’s a challenge to capture the essence of a book’s content in such a way that it grabs the attention of a reader, pleases the author, and satisfies the publisher. There is no doubt in my mind that the work I’ve done thus far directly influences the paintings I’m doing now. I know painting benefits my design work. It’s two sides of the same coin. As an artist, what is your mission? Ron Finley, the famous gardener of South Central Los Angeles said putting beauty in a place that didn’t have it before is a gamechanger. I truly believe my job is to draw attention to what is beautiful even if the subject itself may not be considered a beautiful one. The world can be an ugly place—not just aesthetically—and we need more, not less, beauty. Someone told me, “I can’t be unhappy while looking at your painting.” Honestly, I can’t think of a better compliment. ■ “My new favorite thing about our city.”

“This mural has brought so much love and light to this spot.” —JESSICA WALDEN, community leader

Interview of an Artist: Mary-Frances Burt

Learn the story behind the art