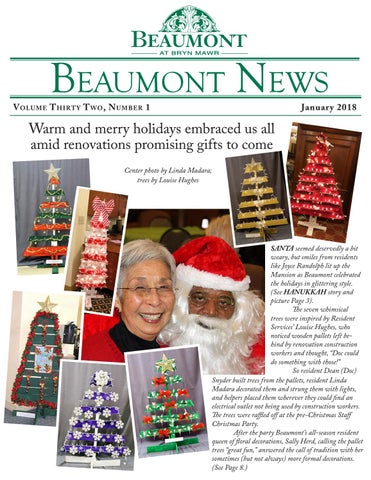 Warm and merry holidays embraced us all amid renovations promising gifts to come Center photo by Linda Madara; trees by Louise Hughes

SANTA seemed deservedly a bit weary, but smiles from residents like Joyce Randolph lit up the Mansion as Beaumont celebrated the holidays in glittering style. (See HANUKKAH story and picture Page 3). The seven whimsical trees were inspired by Resident Services’ Louise Hughes, who noticed wooden pallets left behind by renovation construction workers and thought, “Doc could do something with those!” So resident Dean (Doc) Snyder built trees from the pallets, resident Linda Madara decorated them and strung them with lights, and helpers placed them wherever they could find an electrical outlet not being used by construction workers. The trees were raffled off at the pre-Christmas Staff Christmas Party. After the party Beaumont’s all-season resident queen of floral decorations, Sally Herd, calling the pallet trees “great fun,” answered the call of tradition with her sometimes (but not always) more formal decorations. (See Page 8.)

What to do with holiday trash

DEAR EDITOR, Thank you for your fascinating article about the game of bridge in the November 2017 issue of The Beaumont News. As the son-in-law of Adeline F. Gay, however, I was disappointed that her name was not mentioned as one of the Beaumont loyal players. I understand she played on Beaumont’s number one team for years, and on at least one occasion was called out of “retirement” to participate in the all-important match with Waverly. You mentioned the names of several loyal players who are no longer with us. Mrs. Gay remembers them all. Mrs. Gay is still with you at Beaumont at the mature age of 109. Perhaps you could give her some recognition in the next issue of the Beaumont News.

By Irene Borgogno for the Green Committee

• Cardboard boxes should be flattened and put in the recycling bin. • ‘Air pillows’ (used for cushioning in shipping) should be punctured and flattened. Deflated pillows and bubble wrap are trash for the Beaumont collection system. (These materials can be recycled in the shopping bag collection bins at local ACME, Giant and Whole Foods markets, if you take the materials to these locations.) • Styrofoam ‘peanuts’ are trash for the Beaumont collection system. (UPS and its affiliate stores are willing to take Styrofoam peanuts, if you take the material to one of their locations.)

The holidays are over. I know this is true because I no longer hear Christmas music everywhere I go. However, physical bits and pieces remain. How should you deal with them? Wrapping paper and ribbons:

• Wrapping paper, including tissue paper, can go in the recycling bin. • Boxes and paper bags used for wrapping presents can also go in recycling. Remember to flatten the boxes. • Ribbons go in the trash. Shipping materials:

[The Beaumont News regrets the unintentional omission of Mrs. Gay’s name, which is spoken with reverence in Beaumont bridge-playing circles.]

Readers of last month’s article about acronyms by Linda Madara will appreciate the timing of this news from Beaumont’s Front Office: Beaumont will gradually cease to be known as a Continuing Care Retirement Community (CCRC). It will be categorized, along with other communities of its sort, as a Life Plan Community. The decision was announced by Leading Age, which describes itself as “a national association of notfor-profit senior living organizations.” After “prolonged and intensive research,” which the organization called its “Name Storm Initiative,” its leaders settled upon Life Plan Community as a “more positive” name than Continuing Care Retirement Community (CCRC), and easier to remember. Whether the new designation will gradually be further shortened to become LPC is not known at this time.

• Paper greeting cards can go into the recycling bin; however, remove any glitter, foil or ribbons, which are ordinary trash. Also remove the battery pack, if the card has an audible feature. Battery packs are treated as batteries. • Envelopes go in the recycle bin, but first remove any foil lining, which is ordinary trash. Greenery and plants:

A Hanukkah story with a difference

When residents at Beaumont ask me about Hanukkah, I say: Hanukkah is about celebrating the recapture of the temple in Jerusalem from the Greeks in the Second Century B.C.E. Hanukkah is about lighting the menorah to remember the miracle of the sacred oil lasting eight days instead of one. Hanukkah is about eating latkes and doughnuts and noodle pudding around a holiday table with family and friends. I do not say: Hanukkah is about decorating a tree. This year was different. This year Gerry and I decorated a tree. When we saw the ornamented wooden pallet trees made by Dean Snyder, we thought what fun it would be to have our own tree. Dean thought so too and guided us to the wood shop where we selected a tree and carried it to the crafts room. Once there, we lifted the tree onto a table and stared at it. We hadn’t the faintest idea how to begin. No problem: Linda Madara to the rescue. “It’s simple,” she said as she squeezed water out of bristle brushes into the sink and pulled paints, gloves and smaller sponge brushes from drawers. “You cannot make a mistake. Just decide what colors you want and slather them on.” So, we slathered red and green on alternate panels until our tree shone with color. On to décor. Again, we hadn’t a clue. Again, Linda appeared, this time with her magic glue gun. “Be careful,” she said. “The glue is hot. You can burn your fingers.” We did. But we also had fun gluing golden garlands, candy canes and jewels to the panels and hanging sparkling ornaments at the borders. When we were almost finished Linda asked: “Do you want a bow at the top?” Of course, we did, so Linda crafted a bow. After we attached it and stepped back to look at our joint effort, we realized something was missing. The garland of golden stars was missing. It was time to weave the stars, the sixpointed-golden-stars-of-David, through the interstices of our Christmas bow.

THE AUTHOR and Gerald Isom, new owner of Apt. 114, in the crafts room with their new tree.

LINDA MADARA and Bling in the crafts room with pallet trees before they were decorated.

TRASH continued from page 2 They are not suitable for the Beaumont composting program. Put them in the trash. • Non-woody greenery (most bouquets) and plants (like poinsettias and paperwhites) are suitable for composting. In apartments, put them in the composting bin in the trash room; in villas, put them in an open container near your mailbox, for collection by the grounds crew. • Alternatively, call Housekeeping and ask them to dispose of any of these items. Batteries:

ordinary trash and can be discarded. • Small, flat batteries, like those for watches, hearing aids, and items like camera flashes and gyro-stabilized binoculars, are usually hazardous household waste. Rechargeable batteries are also hazardous waste. Call Maintenance to arrange a pick-up. Displaced items:

• Did the gifts you received include an electronic item that supplants a predecessor? Don’t put the old item in a closet. Small or large, working or defunct, if you do not have someone who wants the item, call Housekeeping to take it away.

Are you an apostrophe snob? Do you carry a magic marker to the supermarket to cross out incorrect apostrophe use (Apple’s – $1.09/lb)? Do you flinch when you see a gate or mailbox sign at The Smith’s house? I have to admit that I do. Not the magic marker, but the flinching. Incorrect use of the apostrophe has expanded exponentially in the last several decades. I must disclose that I have a personal interest: I was a high school English teacher. Most people know that there are rules for apostrophe use. The basics are pretty simple: Apostrophes have two primary functions. They show possession ( John’s book), and they indicate that letters have been removed to form a contraction (do not = don’t). Beyond that, however, the rules can get a little complicated, especially with words ending in S or possessives of irregular plurals (children’s, not childrens’). British novelist, poet and critic Kingsley Amis, when

PROMISING POET, CHLOE KESSLER, 7, with a poem she wrote, submitted by her grandmother, resident Sydelle Kessler. Picture was taken by Chloe’s father, Philip Kessler, a professional photographer in New York.

APOSTROPHES continued from page 6 It seems unlikely that the second and third situations crop up too often. Apostrophes are NOT used for forming plural nouns, which seems to be the main apostrophe error these days. Over the years, I have noticed that more and more people assume that every time there’s an S at the end of a word, an apostrophe must be included somewhere. Written material used to have reliable punctuation. Newspapers, signs, business documents, etc., could be depended upon to be correct. Unfortunately, all that has changed. Homemade signs often have errors, and professionally printed signs are following suit. The advent of this trend may have so-called grocers’ apostrophes, as in the apple example above. Incorrect signs written by the stock boy are accepted as correct, and the errors spread. How can we get back on the right track? Instead

of beating students over the head with grammar books, perhaps we should follow the advice of noted playwright and critic George Bernard Shaw. He denounced apostrophes as uncouth bacilli and ignored them. Shaw asserted that the apostrophe was mostly redundant. He omitted it in many of his writings. He did, however, allow I’m and it’s. As Shaw was campaigning to eliminate apostrophes, Lewis Carroll, of Alice in Wonderland fame, headed in the opposite direction. He made greater use of apostrophes, such as sha’n’t (shall not), with an apostrophe in place of the LL as well as the O. I confess to doing that a few times myself, mostly with shouldn’t’ve (should not have). Spell-check always flagged it, but I didn’t care. In general, however, despite my schoolteacher history, I am a Shavian. I think good old G.B. had the right idea. Begone, uncouth bacilli! Leave us in peace.

CLOCKWISE FROM UPPER LEFT: Tabletop trees brightened each of the common areas. Tall tree near the Mansion hostess stand was a traditional tower of light. Football-mum Santas added a touch of whimsy to dining tables. The Herds’ doorway was decorated with lights and a flameless candle atop the sculpture. The new laser-carved latticework was wreathed in holiday greenery. Photos by Lynn Ayres 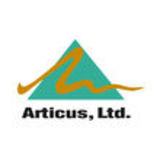