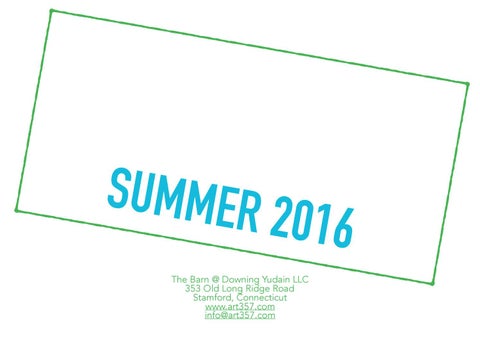 ➤ The summer is winding down. With luck, you are resting somewhere quiet and cool. We hope you will enjoy viewing our new catalogue on your phone, iPad, or computer while riding out the heat under a beach umbrella, relaxing on a dock lakeside, or possibly sitting in field somewhere enjoying cool breezes. ➤ All the works within these pages can all be found at the barn when you return in the fall. If you would like more information on a favorite piece sooner, don’t move - just email us and, hopefully, we will be able to answer all your questions digitally. Isn’t modern technology wonderful? Except, for the most part, you can’t hang it on your walls! Have a wonderful summer. ➤ Lily and David info@art357.com www.art357.com ➤

Robyn Geddes, a Choate and Lake Forest College graduate, worked at Andy Warhol's Factory in the early and mid 80's. After the Factory, he relocated to California where he has focused on his own painting full time. He paints in all media.  We have illustrated several series in our summer catalogue. Whether it is Geddes's crow series, which a culmination of his mature work using his varied paint style with silkscreen cutouts or his new Sea Mint or Via Real series where he pushes the concrete used in his previous bird series to the foreground, the birds are lost and the painting is now about the juxtaposition of media and surface.  He has exhibited extensively in California, Texas and New York.

Rafael Soares, a Brazil native turned Rhode Island resident, paints in the traditional manner of Andrew Wyeth. He has works at the Albright Knox in Buffalo, and numerous private collections.  He has exhibited through out the country and has been included in several books.  His animal works comment on the human condition, echoing the tradition of historic animal painting and illustration

Malcolm Moran is an artist living in Connecticut. His paintings, drawings, and sculpture have been exhibited throughout the United States. Malcolm was born in New Orleans, Louisiana, in 1948, and lived there until his midtwenties. He is a graduate of the University of the South and the Rhode Island School of Design. He is a painter, printmaker, and sculptor. â&#x20AC;&#x153;Life etches itself on to our appearance through a posture, a glance, or perhaps a well placed wrinkle. These outward signs can point to who we are or how life has molded us in to what we have become. The grandeur of our spirit or lack thereof can be exposed by the way a person carries himself in relation to other people and his surroundings. My work attempts to capture this theatre. To maneuver through the joy and challenge of my own life, I draw and paint stories that remind me who I am and where my feet are planted. These paintings and drawings are part of a process rather than a defining statement. Some of the imagery comes from dreams, stories I have heard, or read, or concoct, and occasionally from observed life. I paint and draw and sculpt as a means of working through that which otherwise would have no voice, to get my arms around subjects which other than through metaphor and image making would have no means of expression.My work is mostly a whisper not a shout.â&#x20AC;? Malcolm Moran

Susan Williams is known for her imagined landscapes—dreamy, interior descendants of romantic landscapes in a style recognizably her own. Her paintings represent thoughts and memories that brush up against distractions: an island, a tree, a rock, painted on a canvas of her own private stories, narratives, and daydreams. “The overall impression,” wrote one admirer, “is that of a tone poem—as if Whistler ran into Cormac McCarthy.” In a recent interview, Williams describes her process: “Honestly, I’m best off when I follow instinct and emotion,” she says, “when I leave behind the clutter, chatter, and academics. And I treat the surface as if it were a person, a child, an alter-ego: Yes, it needs to be caressed and loved, but it also needs to be shredded, torn apart. I like to use razor blades and sable brushes. From this, a personality or narrative takes shape as I explore the right combination of realist information with imaginary impressions.” For Williams, that raw vulnerability allows her to flourish. As her work evolves—quietly, evanescently—Williams stays true to herself and her vision, something that is not always easy to accomplish. It is far easier to say, “I must change,” or “I must try something completely new.” It is harder, in many ways, to stay the course. Williams has had significant exhibitions in New York and Maine; juried and group shows; success with numerous collections, including an acquisition of a group of paintings by McKinsey & Co and Goldman Sachs & Co; and solo exhibitions at the Gerald Peters Gallery in New York City. She is represented by the Caldbeck Gallery in Rockland, Maine and the Barry Whistler Gallery in Dallas, Texas. She has worked with various art consultants, including Bea Medinger, Lily Downing, and Heather Hearst. Her work has also appeared in numerous blogs and publications. A New York City native, Williams has a B.A. in Art History and Visual Art from Bowdoin College (cum laude). She is the mother of two grown children, Margaret and George, and lives in Camden, Maine with her husband, Rufus.

Susan Williams, Downward I and Downward II, oil on mylar

Susan Williams, Coming Up For Air, oil on mylar

Steve Cope graduated from the Massachusetts College of Art, and received his MFA from Boston University. Â A long time fixture of New York and Philadephia art scene, Steve has taught at the New York Studio School among other places. HisÂ exhibition history is extensive having been both privately and publicly shown. While he painted large scale works for years, recently he changed his format to miniature panoramic landscapes with the impact of monumental work of art. The works are painstaking rendered to the utmost detail.

J Henry Fair: Growing up cruising the rivers of the South Carolina coast in a johnboat, I was essentially oblivious to the staggering beauty of this place. After two years of flying repeatedly over these inaccessible places where I wandered as a boy, words seem trite when used to describe the singularity of this region. But nothing stays the same. Things evolve with Godâ&#x20AC;&#x2122;s will, and are manipulated by the hand of man. The winding marsh-lined creeks where I learned to slalom are now crowded by houses with docks. The rivers where I cast my net now post warning signs about the mercury content of the fish. A giant condominium is falling into the ocean on the end of the Isle of Palms, coastal forests are being cleared for tract houses, and the traffic everywhere is a mess. Meanwhile, as we crowd ever closer to the shore, demanding federally funded flood insurance to protect our investments, the ocean is rising to take them away. The city of Charleston is predicted to have 30 days per year of flooding by 2020. And all the while 48 people per day move into the region, congesting new roads and bridges as fast as they can be built, and placing a tremendous burden on infrastructure. Is this just the nature of progress, that all good things must be cut down or paved? Or are there effective limits to growth that will preserve this region into the future?