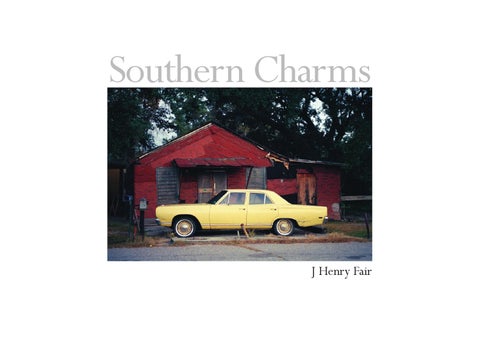 Simultaneously a region, a state of mind, and a heritage, one would be remiss not to repeat the oft said truisms that the south is a beautiful place, replete with deep secrets and sinister history. One either emerges with a burden or defiant denial, and either gives a unique view of the world. These pictures represent an ongoing portrait of home that has been accumulating for years, since long before it was acknowledged as such. Anyone’s relationship with the idea of “home” is difficult, with conflicts of loyalty, uncertainty about the veracity of the “truths” that formed the foundation of one’s development, and the normal baggage from childhood that we each spend a lifetime trying to discard. Being from the south only multiplies these. Any portrait is as much a picture of the portraitist as the subject, even more so in this case. Beauty shots of antebellum mansions with Spanish Moss hanging from the oaks are far less interesting than a picture of indignant black laborers glaring at the young white photographer. One can’t see something in which one is enveloped. As such, the issue of racism and its corrosive effect on consciousness can only be realized when one has left the milieu in which it pervades. It is easy to let the headlines and foibles dominate one’s vision of a place, but the south is a unique and magical “place” that eludes definition just as it comes in to focus.

“Prepare To Meet God” Sign By Side Of Road 24 February, 2013 Wadesboro, North Carolina Photographs of the South by J Henry Fair

Photographs of the South by J Henry Fair