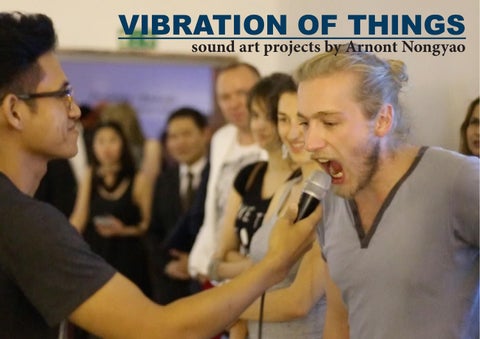 ARTIST STATEMENT I have been using sound and film experimental and as my primary medium since 2003, focus on site-specific work in public.Sound, as idea and material, is central to my practice and I am interested in all ways of listening and hearing, how these ideas are framed, and by whom and local people. I explore include ideas about the construction of culture, public, and the local people. I am drawn to common environments and find them successful sites for my playful style of site specific sound art. I also have extensive design team experience which includes teamwork with other artists and community. My research is both sound and participants in public space,I often create instrument and invite the peoples to create sound which is more than meaning of language. My ambition is to create and amplify the public sound spirit that makes some kind of developing social together.

PHENOMENON UNDER THE MULTI-PURPOSE CANVAS

Phenomenon Under The Multi-Purpose Canvas. The multi-purpose canvas can be adapted and used in accordance with the needs of different users. Most of which are used to protect or cover things. In this exhibit, it was used to protect the lights of the exhibition area to cause shadows under the multi-purpose canvas to make the area that is normally beyond the exhibition. And let the vibrations of the voice is telling the story of a real life outside gallery. Sound of rain through the roof, which then makes sense of the atmosphere around. At Rumpueng Artspace, Chiangmai, Thailand.

MIX TAPE AS WALL (THE MUSICIAN DON’T KNOW THE BAND)

Mix Tape as Wall (The musician don’t know the band) A part of a project “Mix Tape as ?”. An music instruments have dispart recorded by cassette tape,each tap tape from each of music instrument have bring together,collage sounds be a big CD digital audio shape,persuade and open for audiences to create a sound by Head Tape Cassette Pen. At Bann Tuek, Chiangmai, Thailand.

Water Cave // Performance The audience can observe and listen to the rhythmic sound of water drops on a different objects,the sound is unique not constant and changing all time. At V64 gallery, Bangkok, Thailand.

CHANGE POSITION (SOUND THROWIES) Change Position (Sound Throwies) This interactive sound art aimed to transform audiences to be an audio source to create sounds by thowing a ball to the soundâ&amp;#x20AC;&amp;#x2122;s frame which make a diferent bells sound similar to bells in temple which create by visiters ,diferent people different bells sound to become a united song. At Pongnoi artspace, Chiangmai, Thailand.

Mobile Sound. This instrumental is designs to use all parts that can create sound ,by putting a wireless microphone inside and wheels to move to the audience,the audiences can make a participation sound with â&amp;#x20AC;&amp;#x153;Mobile Soundâ&amp;#x20AC;? and push forward the instrument to the next audience and the next. Audio signal to be sent to sound effect overlap layer by layer and amplified to speaker on stage. At BACC, Bangkok, Thailand

Opera of Kard Thung Fha Bod This is sound art projects series Opera of Kard. This video showed a process record sound at local market. Recorder can record sound loops of activity at local market and overlapping sound in real times. As the sound in each loop became mixing of site specific rhythm in each market there are special individual vibration.

There are relation of 2 playground in Chiangmai “Kard Nut” &amp; Szczecin some of child just playing and screening 2 circle shape. 2 speaker separate sound of playground left from Chiangmai and right from Szczecin, 2 speaker install by face to face like as kissing. The feeling of play around installation were related from sound and visual.

THE RECORDS OF SOI

Sound art projects Sound recording QR code interactive on Soundcloud 2:00 min, Poster installation. dimensions variable, 2014 The Records of Soi is project co-operate with From Wat to Wat art project in Chiangmai. Sound recorded from each soi around Wat Umong Road that there are developing area for hight building and each soi there are site specific sound of construction sometime sound are noise. This project that arrange and made new records.

MULTI-PURPOSE CANVAS OF PHENOMENON 2014 Multi-Purpose Canvas of Phenomenon 2014 Site Specific Sound Installation Mixer, 10 Speakers, Multi-Purpose Canvas, 8 sensor, amplify. Drift Project#1, BACC, Bangkok, Thailand. As the universe is expanding, the galaxies are getting farther from each other. People’s conditions in the present art not following it yet. We try to speed up time and downsize things. These attempts.thus have a physical impact on us. For example, a space joining and entrance to an exit is used just as a passage, on the other hand, in terms of existence, it actually enables people to see and interact with each other as much as possible. This space is like the expansion of people’s relationship in terms of looking at each other’s lives. This is considered a paradox that impacts on the feeling happening in the space. Therefore, relaxing time of energy and compressed sound can also create relationship between lives in the space.

TRANCE exhibition 2014 Trance refers to a temporary mental condition in which someone is not fully conscious of or not in control of himself orherself, or a state in which someone is concentrating on something so intensely that the person does not notice what is happening around him or her. Also, trance refers to a type of electronic dance music that developed in the 1990s. To fall into the trance state could be a result of many factors, for example, being hypnotized, brainwashed by a propaganda scheme, being aroused by some form of psychological input, drug-abuse, practicing necromancy, a form of practice of communicating to the spirit or supernatural being, occurrence of mass hysteria and listening to trance music which is able to lead listeners into trance-like condition or fall into a half-conscious or absentminded state. Listening to a so-called propaganda song over and over again is unavoidable nowadays, especially for people who consume mass media like television and radio. We inevitably consume this trance like loop of the returning happiness campaign repeatedly. Whatever your political ideology, we all know the tune and can sing along to this “happy” tune and has probably dazed us into a trance like state. Arnont Nongyao and Piyarat Piyapongwiwat’s work in TRANCE exhibition is originally based on the artists’ personal interests in music, law of vibration, and linguistic theory. It could be a coincidence that the concept of this work is somehow in parallel with the current national situation, or it could be that the subject has somehow existed long into Thai history, but passed us unnoticed. Arnont and Piyarat have carefully selected propaganda songs from a range of nations, languages, cultures for this series of work. Although the selected songs cover a wide range of historical backgrounds and periods of time, they all share mutual points and have tremendous impact on the word’s history including the praise of heroic actions (be they genuine of fictitious), inciting the killing among people of the same nation, lead the masses towards genocide and into wars. TRANCE exhibition 2014 By Arnont Nongyao and Piyarat Piyapongwiwat Curated by Lyla Phimanrat Gallery VER / Venue: Yet Space,Bangkok

TRANCE exhibition “Metamorphosis” Metamorphosis is a series of multi-media installation resulting in many people’s participation. A piano melody was recomposed from parts of selected propaganda songs which were then passed to others to listen to. These people were then asked for their feedback and first impressions, which created this set of multi-media installation, featuring sound, video clips, texts, photographs, objects, and movie posters. All of the 8 selected songs had a march-song rhythm style, which has been used by the state and establishment institutions during conflicts or wars; interestingly, most of the feedback received was of a positive nature. The set of this work is reflecting Arnont and Piyarat’s art practices and their opening of new space and their collaboration with others.

All participation work passed to others to listen song “Marching piano”

The video installation is comprised of 4 works, entitled, Thousand Hills, Are We All Just Dust?, Year Zero and For What It’s Worth. All works are derived from the deconstruction of propaganda songs. Deconstructing the music structure, Arnont &amp; Piyarat recreate a new meaning to these songs. Among 3 parts of the work in this exhibition, this video installation is the only part that is mute. As the visuals in each video dance in relation to its rhythm and vibration, as if...they are attempting to communicate something through silence.

Warpaper is an interactive visual and sound installation, installed in the dark room. The speaker, camera, and sensors are attached to a chair, an ordinary chair that is easily available but somehow looks familiar to one of a significant photograph in Thai history decades ago...or perhaps this is just another coincidence. The work Warpaper acts like the artist’s invitation, asking the audience to join in and become part of their work. The key note from one of the selected songs is decoded and transmitted to a speaker that is filled with water, createing a sitespecific installation. Then, the vibration and image changed according to the audience’s actions and participation. In this idea, “us” the audience, have changed our role from ‘passive’ to ‘activ’ as we are now the creator. 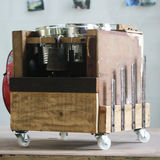