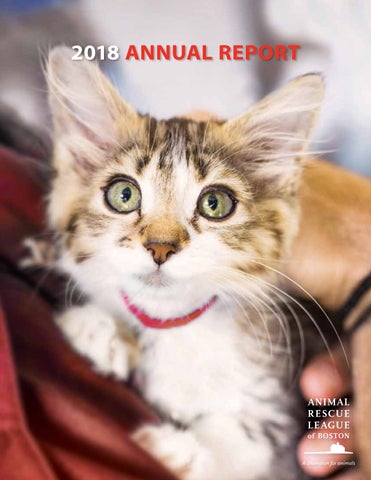 Yoda, also featured on our cover, was found abandoned in a cardboard box in September 2018 when he was only 7 weeks old. This tiny kitten was extremely dehydrated and received medical attention from our shelter veterinary team. After spending several weeks in foster care, Yoda – now named Frodo – found his perfect match at our Boston Animal Care and Adoption Center – all thanks to you!

Our Mission We are an unwavering champion for animals in need, committed to keeping them safe and healthy in habitats and homes.

Contents 2 From the President and Board Chair 3 Board of Directors and Leadership Council 4 Thank you, Malcolm McDonald 5 Our Mission in Action 6 Your Support in Action 9 Anna Harris Smith Legacy Society 10

From the President and Board Chair owners; the remaining feral cats returned to their colonies and network of caregivers.

Dear Friends, In 2016, ARL adopted a new strategic vision that focuses our efforts and resources on animals and people most in need. We are proud to share the progress made, with your support, to realize this vision for the benefit of nearly 17,000 animals in 2018. We learned that access to affordable veterinary care was the number one concern for pet owners in under-resourced communities. With support from PetSmart Charities and Boston’s Mabel Louise Riley Foundation, we were able to expand a small pilot project into the Wellness Waggin’; a mobile veterinary unit where we provide low-cost exams and vaccinations in three Boston neighborhoods. This work builds off of our longstanding spay/neuter services offered through the Spay Waggin’ that serves Southeastern MA and Cape Cod.

Our community outreach vision has benefitted not only owned pets, but also cats living outdoors. In 2018, with dedicated field staff, ARL trapped, provided care for, and rehabilitated cats living in communities; many of whom suffered from starvation and disease. Remarkably, of the 521 cats served, 72% were adopted to permanent homes or returned to their

Many of our insights into community need come from our law enforcement investigations. In 2018, we filed criminal charges for animal cruelty in 56 cases and saw a record number of animals saved from hoarding-type situations. These cases inform our advocacy for laws and regulations to protect animals. This advocacy paid off with the passage of PAWS II, an act which establishes a commission to explore mandatory reporting of animal cruelty; ensures property owners inspect vacant properties for abandoned animals; and prohibits the drowning of wildlife. While our new programs focus on community-based service, ARL continues to innovate and improve the services for animals at our Animal Care and Adoption Centers in Boston, Dedham and Brewster. We have organized our services to minimize the length of stay in shelter and maximize the “live release rate”, positive outcomes for animals coming into our care. We also launched Adoption-Forward, a conversation-based adoption program to facilitate making the best match for both people and animals. In 2018, we also marked a leadership transition of ARL’s Board of Directors. We celebrated the 17 years of service by Malcolm McDonald, the Board Chair for the past six years. Under his leadership, the strategic vision was adopted and many parts of the organization were strengthened. His tireless leadership and commitment to good governance is seen throughout ARL. In fact, it was his recommendation for term limits

for board members, a good practice for non-profits, which prompted this transition. We are deeply indebted to Malcolm for his service and delighted that he remains a dedicated supporter and cheerleader for our work. In the pages that follow, you will note the nearly 12,000 individuals, foundations, and corporations recognized for their contributions to ARL. The annual support provided by people like you is put to work immediately for animals and the people that care for them. Some of you have decided to leave your “print” or legacy for future animal care, as members of the Anna Harris Smith Legacy Society, named after ARL’s founder. This society reflects supporters that have named ARL in their estate plans, securing this important work for generations. Thank you for being part of this exciting vision and for making an impact for animals and people throughout Massachusetts. We strive to honor your support and commitment every day through excellent animal care, good governance, compassion for those we serve, and a vision for a more humane community. Sincerely,

2018-2019 Board of Directors Malcolm McDonald Chair

He started as a volunteer in 2014 and served as a foster parent before being elected to the Board in 2015. Walter deepened his commitment to ARL by joining the Leadership Council and serving as a co-chair.

â&#x20AC;&#x153;ARL has a long and proud history of helping animals in need, and animals have been a major source of happiness and enrichment throughout my life. So I am very pleased to help guide an organization that does so much to help animals and the people who care for them. â&#x20AC;&#x153; - Walter Kenyon, newly elected Board Chair

Thank you, Malcolm, for over 17 years of dedicated service to ARL and animals in need. So many of our successes and accomplishments over the past 17 years would not have been possible without the steadfast work of our retiring Board Chair, Malcolm McDonald. Malcolm started with ARL as a volunteer, walking dogs and cleaning kennels. He joined the board in 2010, and was nominated to Board Chair in 2012. Malcolmâ&#x20AC;&#x2122;s legacy at ARL has been defined by a commitment to three things: rigorous data collection and analysis, fiduciary responsibility, and relentlessly building for the future. These three commitments have launched ARL into a new era. Three years into the five-year strategic plan that Malcolm was instrumental in creating, we have grown our programs and made significant strides for the animals and communities most in need. We are so grateful for everything Malcolm has done for animals in need, and for ARL. Thank you for your service, Malcolm!

Prevent animal cruelty and neglect by strengthening laws and public policies, and increasing community awareness and action to report and combat abuse.

Grow and refocus programs targeted towards those animals in greatest need and to the people who care for them.

Enhance the capacity of ARL infrastructure to ensure the most effective and efficient use of resources for achieving organizational goals.

✔ Managed 544 volunteers who contributed over 27,000 hours. ✔ Introduced the Feline Mod Squad in Dedham and expanded the Canine Mod Squad by 12 members. These groups of experienced volunteers are trained to work with cats and dogs with a variety of health and behavioral issues. ✔ Raised $2.9 million in public support from over 11,400 donors, an increase from 2017. ✔ Added two specialized vehicles to our fleet:

- The Transport Waggin’ which provides safe transportation for animals between our locations as well as helping with out-of-state animal transports.

Your Support in Action:

2018 Impact Report Your support makes everything we do possible! We are pleased to share the outcomes and innovations you helped us achieve in 2018.

Twelve decades of helping animals, people, and communities in need. Thank you for being part of our story!

ARL consistently goes the extra mile for animals in need. Whether through law enforcement or making sure that animals get the best care possible, I’m always impressed by ARL’s commitment to go above and beyond.

A N N A H A R R I S S M I T H L E G AC Y S O C I E T Y The Anna Harris Smith Legacy Society is a group of supporters who want their dedication to the well-being of animals and communities to continue long into the future. By including ARL in their estate plans, these special supporters are making a powerful investment that will touch the lives of animals forever. arlboston.org/anna-harris-smith-legacy-society

Thank You to Our Volunteers In 2018, our 544 volunteers donated 27,114 hours to keep animals happy and healthy. From direct animal care, training and socialization, and all of the daily duties that keep our Animal Care and Adoption Centers running, ARL wouldn’t be what it is without our volunteers.

Volunteers perform a variety of duties, including: •

Board of Directors and Committees

â&#x20AC;&#x153;There is no greater feeling than when a frightened animal comes into the shelter or your home and feels safe with you. To see an animal go from frightened and unsure to loving and confident is the best feeling in the worldâ&#x20AC;?. - Denise Fritschy, Volunteer and Foster Parent

Over 940 cats and kittens spent time in dedicated ARL foster homes in 2018.

Change in Net Assets from Operations

We continued to manage our resources prudently. We

received a clean audit with no management findings from our independent auditors, Alexander, Aronson, Finning and Company.

In 2018, over 530 small animals were adopted across our three adoption centers.

President’s Council The President’s Council is a group of special supporters who give $1,000 or more annually to help animals in need. Their generosity provides the critical resources needed to care for animals where they belong, connect community resources, advocate for stronger laws, and raise awareness to prevent animal cruelty and neglect everywhere.

“Every year we marvel at ARL’s ability to innovate, to find new ways to reach more animals and communities in need, while remaining true to its founding values.” - Polly Marmaduke and Brian Boyle, President’s Council Members

Our transport program helps clear space in over-crowded shelters and bring dogs like Junior to families ready to take care of them!

“Being a Champions Circle member allows me to create a bigger impact. By giving monthly, I can feel good knowing I’m helping animals whenever they may need it most.”

ARLâ&#x20AC;&#x2122;s adoption centers are temporary homes for not just cats and dogs; we often house small animals such as Coco, a 2-year-old Concure.

The 2018 Annual Report is a publication of the Animal Rescue League of Boston, 10 Chandler Street, Boston, MA 02116. Please address any correspondence regarding this report to the address above, attention Development Office.

The Animal Rescue League of Boston receives no government grants or public funding and relies solely on kind supporters like you to provide veterinary care, adoption and rescue services, and special police investigation and advocacy aimed at preventing cruelty and strengthening the laws that protect animals.

Make an appointment at Boston Veterinary Care (617) 226-5605 — a clinic with a mission, all profits support the Animal Rescue League of Boston

Stay Connected with Us!

Visit arlboston.org/dog-training to enroll your pet and view course schedules

Visit arlboston.org/get-involved to learn all the ways you can support animals in need

The Animal Rescue League of Boston

Join the Anna Harris Smith Legacy Society To leave your legacy of compassion for animals, contact ARL’s Development Office at (617) 226-5608 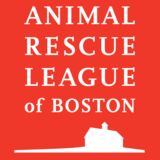