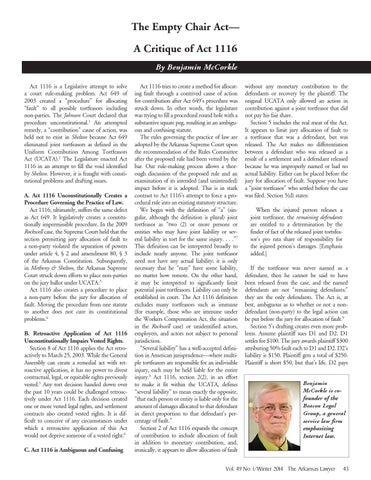 The Empty Chair Act— A Critique of Act 1116 By Benjamin McCorkle Act 1116 is a Legislative attempt to solve a court rule-making problem. Act 649 of 2003 created a “procedure” for allocating “fault” to all possible tortfeasors including non-parties. The Johnson Court declared that procedure unconstitutional.1 An attempted remedy, a “contribution” cause of action, was held not to exist in Shelton because Act 649 eliminated joint tortfeasors as defined in the Uniform Contribution Among Tortfeasors Act (UCATA).2 The Legislature enacted Act 1116 in an attempt to fill the void identified by Shelton. However, it is fraught with constitutional problems and drafting issues. A. Act 1116 Unconstitutionally Creates a Procedure Governing the Practice of Law. Act 1116, ultimately, suffers the same defect as Act 649. It legislatively creates a constitutionally impermissible procedure. In the 2009 Rockwell case, the Supreme Court held that the section permitting jury allocation of fault to a non-party violated the separation of powers under article 4, § 2 and amendment 80, § 3 of the Arkansas Constitution. Subsequently, in Metheny &amp; Shelton, the Arkansas Supreme Court struck down efforts to place non-parties on the jury ballot under UCATA.3 Act 1116 also creates a procedure to place a non-party before the jury for allocation of fault. Moving the procedure from one statute to another does not cure its constitutional problems.4 B. Retroactive Application of Act 1116 Unconstitutionally Impairs Vested Rights. Section 8 of Act 1116 applies the Act retroactively to March 25, 2003. While the General Assembly can create a remedial act with retroactive application, it has no power to divest contractual, legal, or equitable rights previously vested.5 Any tort decision handed down over the past 10 years could be challenged retroactively under Act 1116. Each decision created one or more vested legal rights, and settlement contracts also created vested rights. It is difficult to conceive of any circumstances under which a retroactive application of this Act would not deprive someone of a vested right.6 C. Act 1116 is Ambiguous and Confusing

Act 1116 tries to create a method for allocating fault through a contrived cause of action for contribution after Act 649’s procedure was struck down. In other words, the legislature was trying to fill a procedural round hole with a substantive square peg, resulting in an ambiguous and confusing statute. The rules governing the practice of law are adopted by the Arkansas Supreme Court upon the recommendation of the Rules Committee after the proposed rule had been vetted by the bar. Our rule-making process allows a thorough discussion of the proposed rule and an examination of its intended (and unintended) impact before it is adopted. This is in stark contrast to Act 1116’s attempt to force a procedural rule into an existing statutory structure. We begin with the definition of “a” (singular, although the definition is plural) joint tortfeasor as “two (2) or more persons or entities who may have joint liability or several liability in tort for the same injury. . . .”7 This definition can be interpreted broadly to include nearly anyone. The joint tortfeasor need not have any actual liability; it is only necessary that he “may” have some liability, no matter how remote. On the other hand, it may be interpreted to significantly limit potential joint tortfeasors. Liability can only be established in court. The Act 1116 definition excludes many tortfeasors such as immune (for example, those who are immune under the Workers Compensation Act, the situation in the Rockwell case) or unidentified actors, employers, and actors not subject to personal jurisdiction. “Several liability” has a well-accepted definition in American jurisprudence—where multiple tortfeasors are responsible for an indivisible injury, each may be held liable for the entire injury.8 Act 1116, section 2(2), in an effort to make it fit within the UCATA, defines “several liability” to mean exactly the opposite, “that each person or entity is liable only for the amount of damages allocated to that defendant in direct proportion to that defendant’s percentage of fault.” Section 2 of Act 1116 expands the concept of contribution to include allocation of fault in addition to monetary contribution, and, ironically, it appears to allow allocation of fault

without any monetary contribution to the defendants or recovery by the plaintiff. The original UCATA only allowed an action in contribution against a joint tortfeasor that did not pay his fair share. Section 5 includes the real meat of the Act. It appears to limit jury allocation of fault to a tortfeasor that was a defendant, but was released. The Act makes no differentiation between a defendant who was released as a result of a settlement and a defendant released because he was improperly named or had no actual liability. Either can be placed before the jury for allocation of fault. Suppose you have a “joint tortfeasor” who settled before the case was filed. Section 5(d) states: When the injured person releases a joint tortfeasor, the remaining defendants are entitled to a determination by the finder of fact of the released joint tortsfeasor’s pro rata share of responsibility for the injured person’s damages. [Emphasis added.] If the tortfeasor was never named as a defendant, then he cannot be said to have been released from the case, and the named defendants are not “remaining defendants;” they are the only defendants. The Act is, at best, ambiguous as to whether or not a nondefendant (non-party) to the legal action can be put before the jury for allocation of fault.9 Section 5’s drafting creates even more problems. Assume plaintiff sues D1 and D2. D1 settles for $100. The jury awards plaintiff $300 attributing 50% fault each to D1 and D2. D2’s liability is $150. Plaintiff gets a total of $250. Plaintiff is short $50, but that’s life. D2 pays Benjamin McCorkle is cofounder of the Beacon Legal Group, a general service law firm emphasizing Internet law.