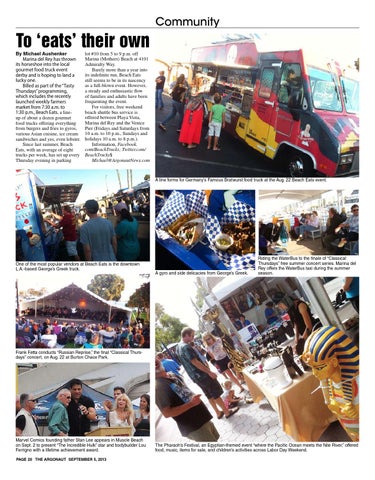 To ‘eats’ their own

By Michael Aushenker Marina del Rey has thrown its horseshoe into the local gourmet food truck event derby and is hoping to land a lucky one. Billed as part of the “Tasty Thursdays” programming, which includes the recently launched weekly farmers market from 7:30 a.m. to 1:30 p.m., Beach Eats, a lineup of about a dozen gourmet food trucks offering everything from burgers and fries to gyros, various Asian cuisine, ice cream sandwiches and yes, even lobster. Since last summer, Beach Eats, with an average of eight trucks per week, has set up every Thursday evening in parking

lot #10 from 5 to 9 p.m. off Marina (Mothers) Beach at 4101 Admiralty Way. Barely more than a year into its indefinite run, Beach Eats still seems to be in its nascency as a full-blown event. However, a steady and enthusiastic flow of families and adults have been frequenting the event. For visitors, free weekend beach shuttle bus service is offered between Playa Vista, Marina del Rey and the Venice Pier (Fridays and Saturdays from 10 a.m. to 10 p.m., Sundays and holidays 10 a.m. to 8 p.m.). Information, Facebook. com/BeachTrucks; Twitter.com/ BeachTrucks§ Michael@ArgonautNews.com

One of the most popular vendors at Beach Eats is the downtown L.A.-based George’s Greek truck.

A gyro and side delicacies from George’s Greek.