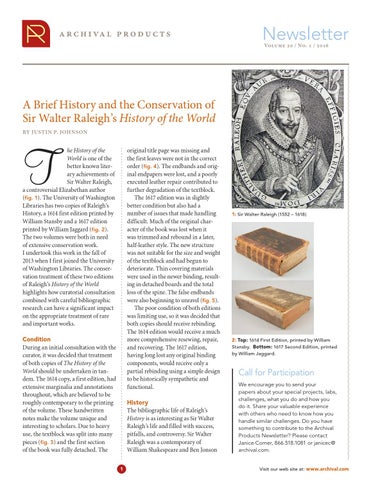 A Brief History and the Conservation of Sir Walter Raleigh’s History of the World BY JUSTIN P. JOHNSON

he History of the World is one of the better known literary achievements of Sir Walter Raleigh, a controversial Elizabethan author (fig. 1). The University of Washington Libraries has two copies of Raleigh’s History, a 1614 first edition printed by William Stansby and a 1617 edition printed by William Jaggard (fig. 2). The two volumes were both in need of extensive conservation work. I undertook this work in the fall of 2013 when I first joined the University of Washington Libraries. The conservation treatment of these two editions of Raleigh’s History of the World highlights how curatorial consultation combined with careful bibliographic research can have a significant impact on the appropriate treatment of rare and important works.

original title page was missing and the first leaves were not in the correct order (fig. 4). The endbands and original endpapers were lost, and a poorly executed leather repair contributed to further degradation of the textblock. The 1617 edition was in slightly better condition but also had a number of issues that made handling difficult. Much of the original character of the book was lost when it was trimmed and rebound in a later, half-leather style. The new structure was not suitable for the size and weight of the textblock and had begun to deteriorate. Thin covering materials were used in the newer binding, resulting in detached boards and the total loss of the spine. The false endbands were also beginning to unravel (fig. 5). The poor condition of both editions was limiting use, so it was decided that both copies should receive rebinding. The 1614 edition would receive a much more comprehensive resewing, repair, and recovering. The 1617 edition, having long lost any original binding components, would receive only a partial rebinding using a simple design to be historically sympathetic and functional.

Condition During an initial consultation with the curator, it was decided that treatment of both copies of The History of the World should be undertaken in tandem. The 1614 copy, a first edition, had extensive marginalia and annotations throughout, which are believed to be roughly contemporary to the printing of the volume. These handwritten notes make the volume unique and interesting to scholars. Due to heavy use, the textblock was split into many pieces (fig. 3) and the first section of the book was fully detached. The

Call for Participation We encourage you to send your papers about your special projects, labs, challenges, what you do and how you do it. Share your valuable experience with others who need to know how you handle similar challenges. Do you have something to contribute to the Archival Products Newsletter? Please contact Janice Comer, 866.518.1081 or janicec@ archival.com. Visit our web site at: www.archival.com

and was a favorite among the court of Elizabeth I. Not without enemies, Raleigh was also deeply mistrusted by Elizabeth’s successor James I, who had Raleigh imprisoned for treason upon ascending the throne. It was during his 13-year confinement in the Tower of London (1603-1616) that Raleigh wrote The History of the World. The work was originally conceived as a five-volume set meant to cover ancient history to his present, though Raleigh only ever managed to complete the first volume. It was during the initial examination of the two volumes that the full impact of Raleigh’s troubled life on his work became apparent. In order to determine the proper order of the first leaves of the 1614 edition, a comparison was made to digital copies of the same edition. Of the four copies virtually inspected, three had lost their title page. In reviewing digital copies of the 1617 edition, I discovered that both William Stansby and William Jaggard had printed a second edition in 1617; a fact that seemed highly unusual. Luckily the available research on this topic is extensive and outlines a very interesting story, one that challenged assumptions I had made about both the 1614 and 1617 editions held at the University of Washington. Consistent with other works of the time, The History of the World is a commentary on modern life thinly veiled in an elaborate historical narrative. The work was originally printed by William Stansby for Walter Burre in 1614, however it was immediately suppressed by the Church of England upon publication for what was deemed to be a harsh criticism of monarchies. By order of King James I, the court ordered all copies of the 1614 edition to have their title pages removed with the intent of slowing Raleigh’s growing influence and popularity among the

public. It is believed the Crown then resold the confiscated copies back to the public for a profit. The later 1617 edition, also printed by Stansby, became the first to bear a printed title page. By that time Raleigh was out of jail, nominally back in the King’s favor, and well on his way to South America in pursuit of the treasures of El Dorado. In the course of the expedition, Raleigh’s men attacked a Spanish outpost on the Orinoco River, inflaming relations between the kingdoms of England and Spain. This ultimately led to Raleigh’s beheading at the Palace of Westminster in 1618. Speculation suggests that Walter Burre transferred the printing contract for The History of the World from William Stansby to William Jaggard, who used the Stansby 1617 edition as a template to produce a new edition in 1621. Jaggard made a significant error in his printing by neglecting to change the date on the engraved colophon used in Stansby’s 1617 edition. Many copies of the third edition were then mistakenly dated 1617, later causing confusion and scholarly debate about The History of the World’s publication history. It is now accepted that Jaggard only released a 1621 edition, and that the 1617 Jaggard edition was simply the result of a typesetter’s mistake. It is likely the compositor responsible for the colophon simply neglected to change the date from 1617 to 1621, resulting in a number of copies being bound and finished with an erroneous date. The 1617 Stansby edition is now considered the true second edition, while the 1617 Jaggard edition is considered a “ghost” edition with an incorrect colophon. The 1621 Jaggard edition is considered a true third edition. In short, this complicated publication history brought about, in part, by Raleigh’s complicated 2

personal history, led to our discovery that the UW Libraries’ 1617 second edition copy is actually a 1621 “ghost” edition. It also confirmed that our 1614 edition had not lost its title page due to condition. In all likelihood, the title page was removed by order of King James I.

adhered with wheat starch paste, and finally reassembled into a true gathering. New endsheets were created from a period-style western laid paper. Thread and sewing support materials were chosen and the textblock was sewn in a style similar to the original, over six raised bands (fig. 9). Rather than sewing endbands directly onto the textblock, a period-style (linen) endband was sewn off the textblock over a core of aero-linen and leather. The new endbands were then aged with an application of diluted watercolor and were attached to the spine along with primary spine liners of western handmade paper (fig. 10). Boards were fashioned from laminated binder’s board and attached with an overall lining of aero-linen, which extended from the lower board face over the spine and across the upper board face. The extended aero-linen lining providing both a strong board attachment and a smooth continuous surface for adhering the leather covering (fig. 11). Dyed calfskin was chosen for the final covering and was applied with wheat starch paste and finished with simple period-style tooling and a label (fig. 12). The 1617 “ghost” edition did not require resewing, although it did receive new endpapers, endbands, boards, and covering. The original spine liners were removed and replaced, and new boards were attached, covered, and the spine was finished with a label. A hollow was created to support the use of five false bands in keeping with known styles of the period. Since this edition had been resewn using a later style (recessed cords), it was important to create a spine profile more sympathetic to the original publication date. The 1617 “ghost” edition then received a half

Conservation Conservation treatment of the 1614 edition started with careful photo documentation followed by the removal of the loose overback attachment of the spine and boards (fig. 6). The original sewing structure was recorded during this process and recognized to be in an alternating two-on and three-on style over six raised sewing supports. The textblock was then taken down to individual sections and dry-cleaned with a combination of brush and smoke sponge. The loose leaves of the first section, including a single flyleaf, required significant cleaning and repair since they were discolored by surface dirt and had extensive tears and losses. The engraved frontispiece was in especially rough condition. It had been poorly trimmed and lined with a heavy application of hide glue and a heavy paper (fig. 7 during an earlier attempt at repair. The stiffened leaf likely prevented the engraving from functioning in harmony with the rest of the gathering, ultimately leading to its detachment (fig. 8). To correct this problem, the page was placed in a water bath to remove the lining and residual hide glue. The leaf was then mounted around its edges onto a western laid paper of similar weight and tone. This allowed the frontispiece to be integrated more harmoniously into the rest of the first section. The other leaves were washed in a water bath, repaired with handmade tissue 3

calfskin leather covering with vellum tips and paper sides. No decorative tooling was undertaken aside from simple gold lines to frame the label (fig. 13).

Conclusion The conservation treatment of these two editions of Raleigh’s History of the World illustrates well how careful bibliographic research can have significant impact on the appropriate treatment of rare and important works. For conservation staff especially, this experience clearly demonstrates the value of exploring details, and that even the most minute errata can lead to important discoveries about the objects in a conservator’s care. It also provided invaluable, previously unrecorded information about important items in the University of Washington’s Special Collections. Most importantly, researchers can now safely use these two important copies of Raleigh’s work. Curators, faculty, and staff can put these wonderful volumes in the hands of students, enriching their educational experience and putting them directly in touch with history.

Racin, J. 1964 The Early Editions of Sir Walter Raleigh’s ‘The History of the World.’ Studies in Bibliography: Papers of the Bibliographical Society of the University of Virginia: 199-209. Willoughby, Edwin Eliott. 1970. A Printer of Shakespeare: The Books and Times of William Jaggard. New York: Haskell House Publishers. Nicholls and Penry Williams. 2011. Sir Walter Raleigh: In Life and Legend. London: Continuum International.

Justin P. Johnson is the Senior Conservator at the University of Washington Libraries. He can be contacted at jpjohn@uw.edu.

Visit our web site at www.archival.com

Call or email today to discuss preservation solutions for your collection.

Archival Products Newsletter A Brief History and the Conservation of Sir Walter Raleigh's History of the World by Justin P. Johnson