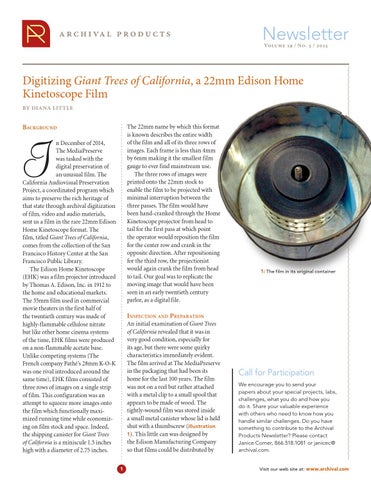 The 22mm name by which this format is known describes the entire width of the film and all of its three rows of images. Each frame is less than 4mm by 6mm making it the smallest film gauge to ever find mainstream use. The three rows of images were printed onto the 22mm stock to enable the film to be projected with minimal interruption between the three passes. The film would have been hand-cranked through the Home Kinetoscope projector from head to tail for the first pass at which point the operator would reposition the film for the center row and crank in the opposite direction. After repositioning for the third row, the projectionist would again crank the film from head to tail. Our goal was to replicate the moving image that would have been seen in an early twentieth century parlor, as a digital file.

n December of 2014, The MediaPreserve was tasked with the digital preservation of an unusual film. The California Audiovisual Preservation Project, a coordinated program which aims to preserve the rich heritage of that state through archival digitization of film, video and audio materials, sent us a film in the rare 22mm Edison Home Kinetoscope format. The film, titled Giant Trees of California, comes from the collection of the San Francisco History Center at the San Francisco Public Library. The Edison Home Kinetoscope (EHK) was a film projector introduced by Thomas A. Edison, Inc. in 1912 to the home and educational markets. The 35mm film used in commercial movie theaters in the first half of the twentieth century was made of highly-flammable cellulose nitrate but like other home cinema systems of the time, EHK films were produced on a non-flammable acetate base. Unlike competing systems (The French company Pathé’s 28mm K-O-K was one rival introduced around the same time), EHK films consisted of three rows of images on a single strip of film. This configuration was an attempt to squeeze more images onto the film which functionally maximized running time while economizing on film stock and space. Indeed, the shipping canister for Giant Trees of California is a miniscule 1.5 inches high with a diameter of 2.75 inches.

1: The film in its original container

I nspection and P reparation An initial examination of Giant Trees of California revealed that it was in very good condition, especially for its age, but there were some quirky characteristics immediately evident. The film arrived at The MediaPreserve in the packaging that had been its home for the last 100 years. The film was not on a reel but rather attached with a metal clip to a small spool that appears to be made of wood. The tightly-wound film was stored inside a small metal canister whose lid is held shut with a thumbscrew (illustration 1). This little can was designed by the Edison Manufacturing Company so that films could be distributed by 1

Call for Participation We encourage you to send your papers about your special projects, labs, challenges, what you do and how you do it. Share your valuable experience with others who need to know how you handle similar challenges. Do you have something to contribute to the Archival Products Newsletter? Please contact Janice Comer, 866.518.1081 or janicec@ archival.com. Visit our web site at: www.archival.com

mail-order rental to owners of the Home Kinetoscope. The metal can certainly did a good job of protecting this film from the elements but the small-diameter hub around which the roll was wound means that the film has a tight curl memory. This made the film somewhat difficult to work with but storing the film in the reverse wind on a large-diameter core will likely help to alleviate the curl over time. Considering the small size of both the frame and perforations, damage could have easily been done by the moving parts of an EHK projector. Torn perforations would have potentially destroyed several frames since two pull-down claws on the projector were used simultaneously to drive each of the three rows of images. However, this film is in excellent physical condition with only a few cracks that hardly mar the visible image. A few partially-burned frames are also visible and these would have been caused by the film sticking in the projector gate and being exposed to the hot lamp for more than the usual fraction of a second. In this case, the burns are few and small and are hardly visible while viewing the film at the correct speed. Â All films produced for the Home Kinetoscope were reduction prints made from 35mm negatives, primarily of Edison Studios productions. A close inspection of Giant Trees of California reveals that it is no exception. The four printed-through perforations that are visible on either side of each frame of the Kinetoscope print are evidence that the title originated on 35mm. Â  Even as digital media technologies have supplanted motion-picture film, the more common film gauges (8mm, Super8, 16mm and 35mm) are sufficiently ubiquitous to allow them to be relatively easy to work

with. Though film-handling supplies are gradually being discontinued by large manufacturers, one can still acquire leaders and splicing tape in the common gauges, equipment such as splicers and synchronizers can be found in auctions, and scanners of increasingly high-resolution have come on the market over the past several years. Film in the 22m gauge, on the other hand, was only produced from 1912-1914. A camera was never introduced for the format so it is likely that such supplies never existed for it. As a result, a bit of improvisation was necessary in preparing Giant Trees of California for scanning. Â The film roll includes printed head and tail leaders that confirm such information as the title, copyright information and pricing class (illustration 2). Films for the Home Kinetoscope were priced according to which of eight classes (named A through H) they belonged. Alan Kattelle, in his article on the subject The Moving Image, suggests that class was at least partially determined by length. The printed leader at the head of Giant Trees of California indicates that it is a Class A title, so at less than 20 feet. It is likely on the shorter end of the Home Kinetoscope spectrum. 2

3: Tail of the film as it was originally received

Digitization and Beyond The MediaPreserve was able to digitize Giant Trees of California on our Kinetta Archival Scanner which has proven to be a gentle and versatile film-conversion tool. The scanner’s high-resolution 3K sensor and sprocketless film path made it the obvious choice for this 22mm challenge. The scanner’s transport path consists of a tachometer roller, four large-diameter cleaning rollers and a curved gate that holds the film in position as each frame is captured as a digital image. As mentioned above, a standard 35mm scanner gate was used in the absence of a 22mm gate. We chose this approach with the understanding that, since the film would ride around in the loose gate, image stability might be a problem. To minimize this movement, we shimmed up the gate with several coins to help the film ride along the bottom edge (illustration 6). Additionally, the scanner’s software is equipped with a tool that allowed the image to be stabilized at the point of digital capture. After a few tries, we were able to obtain an image that is remarkably steady. Even a genius on the order of Thomas Edison couldn’t have envisioned a modern film scanner in 1912, but the process of moving a 22mm film through the Kinetta for digital capture is not totally dissimilar from the act of projecting it on a Home

The printed tail leader instructs the EHK user in how to properly attach the end of the film to the spool before rewinding (illustration 3). In addition to being charming and informative, these leaders provide a bit of lead-in and lead-out to buffer the frames that contain images. However, additional leader was required for handling and threading. Since our scanner is not equipped with a 22mm gate and the small scale of this project did not justify the manufacture of such a gate, we decided that the film should be run in the standard 35mm gate. Unfortunately, this was the smallest available gate that was still wider than 22mm. Thus, 35mm leader was tape-spliced to the head and tail of the print to make it easier to work with (illustration 4). As a last preparation step, the film was hand-cleaned using a velvet cloth and the gentle solvent HFE8200 to remove any surface dirt (illustration 5). The cloth remained fairly clean after running the film through it twice which suggests that this particular print of Giant Trees of California probably didn’t see much use. 3

Kinetoscope. Zooming in on the first row of images, each frame of the film was scanned from head to tail. After repositioning for the second row, the images were captured from tail to head. Finally, the third row was scanned in the same configuration as the first row. Though the scanner employs no sprockets or pull-down claws, the two rows of perforations were vital in that they were used by the stabilization tool to wrangle the weaving film.   Each row of images was captured as an individual video file at approximately 3K resolution. The raw scans appear low contrast, to allow for maximum flexibility in color correction, and include a bit of the film edge and perforations outside of the intended image area (illustration 7). Our final step in the project was to turn these raw files into video that resembles how the film most likely looked when it was projected 100 years ago. Blackmagic Design’s DaVinci Resolve color correction software is a useful all-in-one tool for working with film scans. In addition to cropping the image to the frame edges, boosting the contrast, and balancing the highlights and shadows to obtain a nice black-and-white image, Resolve was used to slow down the image to an appropriate running speed. Determining running speed can be tricky when no documentation is present. Fortunately, there is enough natural motion, like people walking, in the film to indicate that 16 frames per second was likely the rate at which it was photographed. A search of similar films in the database of the Pordenone Silent Film Festival suggests that 16 FPS is a reasonable speed for this era. So what is the content of this 22mm film? It’s very much what you might expect from the title Giant Trees of California. Views of

the Mariposa Grove of sequoias in Yosemite National Park would have provided a visual vacation to EHK users hundreds or thousands of miles away from California. The travelogue even includes the requisite shot of a carved-out tree that is wide enough to drive a car through. In the final third of the film, we see some bonus images of other dramatic Yosemite landmarks including Bridalveil Fall and the granite formation known as “El Capitan.” At three minutes, this Edison Home Kinetoscope film offers a brief but delightful insight into how we watched movies 100 years ago.

Visit our web site at www.archival.com

Call or email today to discuss preservation solutions for your collection.