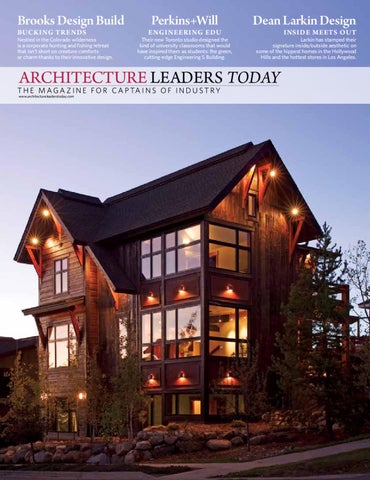 Nestled in the Colorado wilderness is a corporate hunting and fishing retreat that isn&#39;t short on creature comforts or charm thanks to their innovative design.

Their new Toronto studio designed the kind of university classrooms that would have inspired them as students: the green, cutting-edge Engineering 5 Building.

Larkin has stamped their signature inside/outside aesthetic on some of the hippest homes in the Hollywood Hills and the hottest stores in Los Angeles.

The Blue Jay Residence, Calif. The client’s “Hollywood-hipster lifestyle,” as Dean Larkin described it, needed a house to match. So, Larkin reimagined the existing home and expanded it to nearly 6,000 sq. ft. Larkin utilized the indoor/outdoor aesthetic to incorporate stellar views of the city below with custom Fleetwood doors which open the indoor living space to the outside. The dramatic infinity-edge pool feels perched on the edge of the world. Lit with color-changing LEDs, the pool becomes a kinetic work of art connecting the water with the star-speckled sky.

Dean Larkin Design&#39;s famous indoor/outdoor aesthetic has made his firm one of the most sought-after in L.A.

CLOCKWISE FROM TOP RIGHT: The sitting room serves as a transitional space for entertaining and lounging; the master suite can be seen just beyond. The room boasts rich walnut floors and a common ceiling which extends over the outdoor sitting area. Some of the kitchen’s features can be seen best by daylight: limestone flooring, recycled quartz counter top, whitewashed, reclaimed oak Valcucine cabinets and custom lighting. The dining area has just enough room for eight and overlooks the dramatic pool just outside. Another angle of the kitchen shows off the many textures at work. The island neatly hides extra storage at its base. The front entry welcomes guests with a floating stepping-stone pathway, lit by LEDs and accompanied by soothing waterfalls. At the end awaits a massive 14-foot solid walnut door.

born and raised Angelino, architect Dean Larkin has spent the last two decades designing both residential and commercial real estate focused on the Southern Californian lifestyle. Heavily fixated on indoor/outdoor concepts of design, Larkin’s work distinguishes itself as a fusion of mid-century modern and outof-the-box aesthetics; a look that Larkin says has defined his firm, Dean Larkin Design, as a leading high-profile architectural firm in Los Angeles. “I foster a team approach with everyone,” Larkin said. “We’re 100 percent all on the same page. Everyone gets excited during the design process. Of course we’ll be challenged and people will have different opinions. But people come to us to give them something out-of-the-box and we will meet their needs.” Much of the success of Larkin’s design process with his clients can be credited to the team-like approach he uses in the office. Rather than taking a more traditional and hierarchical approach, Larkin says he runs a democratic office, where he and his team collaborate to produce the best designs for their demanding clientele. “We get a good reputation because of the way we approach projects,” Larkin said. “Even the ‘tough cities’ don’t seem tough to us. When people are really committed to design, we’ll take it on and do our homework and get it right. Our clients have a good time and that’s how it should be, it’s how I was taught, that’s what really sets us apart from many other firms. We know our stuff.” While Larkin and his close knit team have developed a successful design process, they are not immune to the daily challenges that come with balancing the wants of a client with the architectural vision of Larkin and his team. According to Larkin, the level of his clients’ sophistication has steadily increased over the last 10 years; and, he has found that his high-end clients are more 4 Architecture Leaders Today

CLOCKWISE FROM TOP RIGHT: The master suite connects the outside views with the indoor sleeping and lounging area by the use of a common walnut ceiling. The sliding glass doors blur the lines between inside and out. The covered sitting area next to the pool makes for a comfortable and elegant entertaining space. The common ceiling extends out from the master suite. The master bathroom uses lava rock wall and limestone flooring, giving the room an earthy texture that is not seen in most bathrooms. The shower is outfitted with jets, steam and full-range showerheads. The seat in the shower was carved from a 3,000 pound boulder. The limestone tub is from Duravit and the fixtures throughout are by Dornbracht. The floor-to-ceiling windows display the green brush just outside. The spacious master bedroom highlights the reclaimed Brazilian peroba rosa bed and a bluestone double-sided fireplace; over it hangs a piece of art by William Laga. To the left of the fireplace sits a custom chair carved from the stump of a fallen tree. Another angle of the outside sitting area shows off the large piece of art by Kenji Nanao hanging over the bed. It also demonstrates how the common ceiling functions in blurring the lines between outdoor and indoor living. At nighttime the lights from the pool, master bedroom and outdoor fire pit highlight the lines of the Blue Jay Residence spectacularly.

passionate and appreciative of quality design, as well as more honed demands. Larkin said that rather than see his client’s needs as a challenge, he takes them on as opportunities to diversify his portfolio and raise the bar for his firm --helping it evolve into what it has become today. Larkin and his team recently completed the first Vivienne Westwood store in the U.S. Located in West Hollywood, Larkin evolved his aesthetic for the famously irreverent British fashion designer, and incorporated his signature indoor/outdoor design concept. The store’s opening brought out the Hollywood stars and celebrities, but projects like that do not come knocking on Larkin’s door every day. Even in the face of the economic downturn, Larkin and his team have been able to come through relatively unscathed. Speaking to the longevity and financial strength of his firm, Larkin said that he was able to hire new employees in 2010, something many architectural firms could not. Larkin credits his financial success to growing the firm’s residential market -- going back to their base, so to speak. “I made a very concerted effort not to be too commercial heavy,” Larkin said. “I put the effort into ‘when times get tough, go back to your base.’ So I made a real effort in 2008 to put an effort into growing our residential market. That’s proved to be a really good move for the firm. We’re not unscathed but we haven’t had to do a lot of the drastic cutbacks our peers have.” The firm has recently expanded their portfolio into sustainable design. While some of his clients have been weary of green practices, Larkin said that he and his team incorporate green elements into May/June 2011 7

DA LIGHTING STUDIO DA Lighting Studio’s close working relationship with Dean Larkin Design has proven to be a great match. Lighting is always a key ingredient when it comes to Dean Larkin’s designs. From an elegant and sophisticated fast track restaurant for a celebrity chef to a vibrant and colorful nightclub, DA Lighting Studio is always there to meet the most stringent deadlines, meet the budget and provide the desired aesthetic while being conscious of the environment and longterm maintenance. For more information on DA Lighting, please visit www.dalightingstudio.com. See ad on page 96.

CLOCKWISE FROM TOP RIGHT: The Nydes Residence, Calif. The soaring living room ceiling, along with the disappearing glass doors, invites the outdoors in and accentuates the home’s 270-degree views of the Pacific Ocean, downtown Los Angeles and the nearby Getty Art Museum. The once 1980’s French-style house was stripped down to reveal the skeleton of the original mid-century home that had been remodeled. From there, Dean Larkin began a redesign that better fit the client’s taste. The exterior is made up of various materials: glass, stone, wood and stucco forms. The deck was constructed out of horizontal planes of ipe wood, which contrast with the varying colors of stone and blue pool. The master bathroom emphasizes the home’s unifying philosophy that every room is a private sanctuary balancing utility, grace and style. Considered the client’s personal sanctuary, the design draws in a vast amount of natural light with the creative use of glass. The family room is large in size, but intimate in ambience. The dropped beams from the ceiling and stone fireplace make for a comfortable atmosphere highlighting the outside flora in a large window. The view from the master bedroom overlooks a hilltop setting with floor-to-ceiling glass sliding doors and a deck that edges out over the wilderness beyond the Nydes Residence.

their residential design through energy conservation, including using daylight as an alternative to electric energy. “There’s nothing more energy efficient that we can do than create a house where you don’t have to turn on a light during the day. That’s one of those things we bring to the table and sets us apart from others,” Larkin said. His residential designs focus on the use of natural light through extensive glass and invisible surfaces, again playing up the indoor/outdoor aesthetic. Larkin said that at the end of the day it’s about designing for the client and their specific wants and needs. Taking a positive and innovative approach to his designs, Larkin looks toward the future, striving to create spaces that are livable, luxurious and cutting-edge. “We want our homes to be convertible,” Larkin said. “You should be able to vacation in your own home. There should be that much excitement and fun and that much immersion into where you live.” ALT 10 Architecture Leaders Today

Inside Meets Out: Larkin has stamped their signature inside/outside aesthetic on some of the hippest homes in the Hollywood Hills and the hottest stores in Los Angeles.