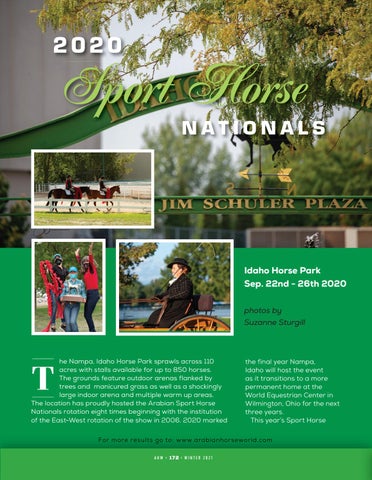 he Nampa, Idaho Horse Park sprawls across 110 acres with stalls available for up to 850 horses. The grounds feature outdoor arenas flanked by trees and manicured grass as well as a shockingly large indoor arena and multiple warm up areas. The location has proudly hosted the Arabian Sport Horse Nationals rotation eight times beginning with the institution of the East-West rotation of the show in 2006. 2020 marked

the final year Nampa, Idaho will host the event as it transitions to a more permanent home at the World Equestrian Center in Wilmington, Ohio for the next three years. This yearâ&amp;#x20AC;&amp;#x2122;s Sport Horse

Nationals was executed with some trepidation under the continued pressures from a post-COVID society. Despite this, the show maintained steady numbers with over 1,800 entries in their vast array of classes (up 200 entries from the 2018 rotation). There was a nice increase among the young horse in-hand classes. The growth in this area shows promise that breeders are investing in the development of the Arabian sport horse as the divisions grow more competitive with each passing year. The weather was welcoming, and although the camaraderie was a bit wanting compared to previous years due to social distancing, the atmosphere was warm and enthusiastic. Exhibitors were thankful for the opportunity to present their horses after months of cancelled competitions. 162 National Champion rose blankets were awarded to the best of the breed in Carriage Driving, Hunter, Jumper, Sport Horse under Saddle, Western Dressage, Classical Dressage, and Sport Horse in Hand divisions. — Morgan Moore

Lisa Del Mundo’s stallion Jubilee WGR (Whitegates Raffi x Timeless WGR), won four National Championships, a Reserve Championship and the Supreme Champion Stallion title out of eight classes. “I’ve had him since he was 10 months old, and he’s 14 this year, so that’s a long time together,” says Lisa. “He’s 63% Crabbet and he looks it. These are are solid, good minded horses. “I call him Jubal. I almost changed his name when I got him because to me Jubilee is a girl’s name. But I guess it fits him because it means celebration, and he’s certainly been that. “I did all his training since the beginning. My mom was a trainer so I’ve been working with horses my whole life. The only handler Jubal has ever had besides me, was this year when Colton Ford showed him to two championships “I think the judges loved Jubal’s trot. It’s very powerful and he loves to show it off. Sometimes too much! He’s got one of the biggest walks. When he was two, I put him out in my arena and took some photographs, and there was one shot that made me go, ‘This horse!’ He naturally uses himself really well. He’s built uphill, and he’s happy to get collected. He’s solid. Whatever I ask of him, he just goes with it. We asked Lisa, why Arabians? “They always find me!” she says. “My mom had an Arab mare. She was super hot; bred to be a park horse. I used to ride her when was 11 years old. Before I bought her from my mom I took her out and she kind of roadrashed me all up, but I bought her anyway. I love the fact that Arabians just keep going. Every Arabian I’ve worked with will give you everything. They are amazing athletes. I give 100 percent and they give 110%. It’s pretty special.” And as for Jubilee’s future, Lisa says, “I just started offering him at stud because I’ve had several inquiries. His is a beautiful old pedigree, and he has a lovely disposition. He’s super sweet, and most people don’t even know he’s a stallion. He understands how to behave. He loves to go out on the trail. He’s not spooky. I’ve done a bit of jumping with him. He’s just an all-around horse. He’s super reliable, and quiet. He doesn’t get all ramped up. He deserves a chance at stud. “When I look back on all the years with him I would have to say the Sport Horse Supreme Championship is the most special moment with him. That, and the trot that Jubal showed me when he was two… when I didn’t even know that Sport Horse Nationals existed.”

Victoria bred her Sport Horse Champion Half-Arabian Stallion AL Khassius Khlay (by VMA KHAHPUR KHOPI out of a Quarter Horse mare). “I have always loved VMA KHAHPUR KHOPI - I think he’s an under-used stallion,” she says. “Khassius’s dam is a phenomenally well-bred appendix registered mare by Dry Dock by Doc Bar and out of a Native Dancer daughter. I bought her and bred her to Khahpur and Khassius was the result. I delivered him and we’ve spent every day together ever since. He’s always been super special. He came out of the womb charismatic. This guy has just got it. He’s super kind, with a quiet mind, and the scope and length of leg that I wanted from Khahpur. He’s almost the spitting image of his sire. A lot of people in the open world are inquiring about him for his trainability and how quiet he is. You would never know he is a stallion. He never opens his mouth. He behaves himself. At home he goes out with other geldings – we treat him like a normal horse.

“I wanted him to have a good solid resume before breeding him. He is eight years old now and he has numerous Regional Championships in dressage and open in hand. I show him myself. I am very bonded with him. I don’t know that I’ve ever met a horse that has as much heart as he has. He will work until you tell him to stop. He’s enjoyable to show and to be with. For me, if my horse cannot live a normal life as a horse, he does not need to be a stallion. I don’t care how good he is. His happiness matters to me. Teaching them to be successful show horses is the least of my concerns. My biggest concern as a trainer is for them to learn how to be a solid citizen out in this world. Because if you are a solid citizen, you will always have value. “Sport Horse Nationals was a great show. I had fun, and I’m thankful for every opportunity to get to show. I’m lucky to make a living doing something that is my passion, and that I have clients who send me quality horses. Everybody seemed so gracious and happy to be at Sport Horse Nationals. Part of that might be the demographic of Sport Horse people. They are lovely, wonderful people. They enjoy making these goals each year and trying to achieve them. The whole attitude and atmosphere was wonderful. And we had a great horse show on top of it.”

MIDDLE RIGHT: Champion Sport Horse Show Hack ATR and Reserve Champion Sport Horse Show Hack ES GAMAL (*Jullyen El Jamaal x Gianna), owned by Nicole Rowley, Thorp, Washington. TOP LEFT AND MIDDLE LEFT: Trish Nelson, of Nelson Farms, Tucson, Arizona, bred and showed the Supreme Champion Half-Arabian Two-YearOld In-Hand, the filly DESTINY BY DESIGN NF. The filly is sired by Trish’s stallion, AM Designing Star (AM Good Oldboy x AM Shining Sword), aka “Desi,” who sadly died last year. Tish is pictured in the center of “The crew,” Carla Adams, and the Barker family, top left, and with “DD,” inset. “To go to the Sport Horse Nationals and do so well with this filly was heart-wrenching. Really bittersweet,” says Trish. The filly’s dam is an off the track Thoroughbred who Trish acquired through a rescue organization. “She had fractured her fetlock and needed someplace to go,” Trish adds. “She was a really pretty mare. I have raised Anglos for years, so when she healed I bred her to Desi. Destiny by Design showed only once before Sport Horse, and she was awesome at her first show. At Sport Horse Nationals she was Champion in her class and then won Supreme. That was my first Supreme Champion.”

Exhibitors were thankful for the opportunity to present their horses after months of cancelled competitions, introduction by Morgan Moore