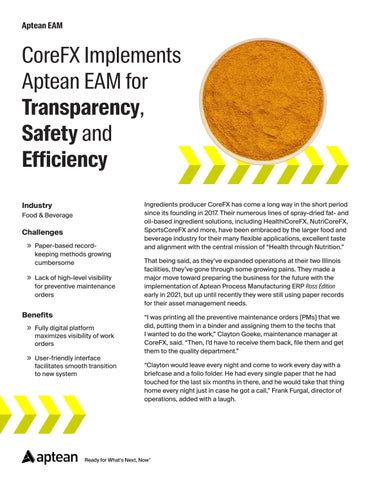 Ingredients producer CoreFX has come a long way in the short period since its founding in 2017. Their numerous lines of spray-dried fat- and oil-based ingredient solutions, including HealthiCoreFX, NutriCoreFX, SportsCoreFX and more, have been embraced by the larger food and beverage industry for their many flexible applications, excellent taste and alignment with the central mission of “Health through Nutrition.” That being said, as they’ve expanded operations at their two Illinois facilities, they’ve gone through some growing pains. They made a major move toward preparing the business for the future with the implementation of Aptean Process Manufacturing ERP Ross Edition early in 2021, but up until recently they were still using paper records for their asset management needs. “I was printing all the preventive maintenance orders [PMs] that we did, putting them in a binder and assigning them to the techs that I wanted to do the work,” Clayton Goeke, maintenance manager at CoreFX, said. “Then, I’d have to receive them back, file them and get them to the quality department.” “Clayton would leave every night and come to work every day with a briefcase and a folio folder. He had every single paper that he had touched for the last six months in there, and he would take that thing home every night just in case he got a call,” Frank Furgal, director of operations, added with a laugh.

This cumbersome method of administration, as well as feedback received from auditors, pushed the CoreFX leadership team to consider a fully digital enterprise asset management (EAM) solution. Because their existing Aptean system was deployed smoothly and performing well, they decided to consider Aptean EAM for their needs. “Knowing how well we worked with Aptean on the Aptean Process Manufacturing ERP rollout, we felt very comfortable working with Aptean on their EAM,” Furgal said. “We weren’t with the times,” added Goeke. “Auditors understood what we were doing, but they pushed us to get a computerized program, so we could definitely see how Aptean’s system was going to help us.” And so, not long after going live with Aptean Process Manufacturing ERP, they became an early adopter of Aptean EAM and began the process of working with Aptean’s experienced teams to begin the implementation. Just a few months later, the improvements were already becoming clear.

“It’s key to have everything at your fingertips. In an audit, you want to be able to answer the auditor’s questions as quickly as possible to cover as much ground as your can.” Frank Furgal, Director of Operations, CoreFX Ingredients

Greater Transparency and Visibility With much of their important asset management information relegated to paper documents with hastily handwritten notes, both Furgal and Goeke were struggling with issues of transparency and visibility of PMs and work orders prior to implementation. The difference of a digital interface and database has made all the difference in that regard. “It’s key to have everything at your fingertips,” Furgal said. “It speeds things up from the administration side. In an audit, you want to be able to answer the auditor’s questions as quickly as possible and move through those things to cover as much ground as you can.” “Assigning projects to the staff is a lot easier,” Goeke added. “It’s simple for me to get the technicians the jobs that they need to do, and it’s a lot easier for supervisors and quality techs to get an issue in front of me. It takes away the delay—the techs just need to plug the information in, and it’s out there right away. They don’t have to go back to their desk to do any review—they can just type in any issue that they see.”

By making the execution of several critical processes easier and more accessible, Aptean EAM has helped CoreFX’s teams work better together and keep communication clear. Knowing at a glance what PMs and work orders have already been filed also helps prevent duplication of effort, increasing worker efficiency and avoiding confusion.

Better Safety and Easy Scheduling Another positive effect of the user-friendly Aptean EAM interface has been to improve safety and scheduling efforts at CoreFX. Both of these areas are critical for their operations, as a risk-free working environment and informed planning are keys to keeping uptime at a maximum. “For me, it’s important to measure how many safety items have been checked off,” Furgal said. “I’ve seen that if you can get more of those safety items taken care of, it shows a reduction in overall accidents and helps with keeping the whole workplace safer so there’s less lost time.” The teams feel empowered to accomplish more, especially if they need to ramp up for a high-demand period or prepare for a compliance check. “We’ve got an audit coming up here, and when we’ve got a lot of quick work orders that are put in, I can go in there and prioritize which ones I need to assign knowing that it’s coming in two weeks,” Goeke said. “I can scroll through the list and see which ones can be accomplished during this time, so it definitely helps with scheduling of maintenance.” With greater assuredness and control, CoreFX is primed to succeed and continually improve their workplace safety and scheduling efforts as familiarity with their new system grows.

A Collaborative Implementation At Aptean, we’re proud to work as partners alongside our clients. The regular communication during deployment and joint effort between our teams and those at CoreFX created a positive environment that encouraged collaboration throughout implementation and resulted in a smooth rollout of our EAM solution. “One part of the implementation that I always enjoyed was having weekly meetings,” said Furgal. “It was always great to get caught up on where we were at, status-wise. They were relatively quick meetings, mostly high-level, but it was always great getting a little conversation about the different things we wanted to see. It felt like we were always making some good progress.” The step of training all employees on the new interface was also straightforward and effective. While the change to procedures was significant, the guidance provided by Aptean and approachability of our platform, combined with the willing learners at CoreFX, led to success. “It’s been a pretty easy transition for the entire organization,” said Goeke. “I took a role in getting everybody trained and getting them logged in, and it was all very simple. Getting everyone up to speed was pretty quick, and my technicians took to it really well. I also worked with supervisors and people on the quality team so that they can put in work orders too.” Now, CoreFX is looking forward to implementing the inventory management module of Aptean EAM, which should help not only with making sure replacement parts are on-hand when they’re needed, but also make tracking the financials of asset maintenance more manageable. “We really want to have all our parts in there, like a virtual warehouse, because we’ll be able to manage our finances much better that way,” Furgal said. “We’ll be able to issue costs correctly to each asset that we have on the list, and it will also help with cash flow overall because we’ll only have to charge out when we use those parts.” The teams at CoreFX will be keeping an eye on their efficiency in the coming year, as they’re expecting improvement in their production uptime as everyone on board becomes more accustomed with the system.

“Assigning projects to the staff is a lot easier. It’s simple for me to get the technicians the jobs that they need to do, and it’s a lot easier for supervisors and quality techs to get an issue in front of me.” Clayton Goeke, Maintenance Manager, CoreFX Ingredients

“As we get this more baked into our overall culture, I would expect to see our downtime go down considerably next year,” said Furgal. “The culture here prior to this was putting everything on paper, but we’re working to get everybody to do it on the digital interface now. It’s going to take a little bit to get everybody up to speed on that, but the ones that have grasped it, they’ve embraced it fully.” By the same token, Aptean has embraced the partnership and anticipates shared success in the future as additional features and modules are rolled out. With the right system in place and fueling iteration and improvement, CoreFX is on an upward trajectory and positioned to continue to make progress on their key objectives. Ready to learn more about what Aptean EAM can do for your business? Contact us today.

Are You Ready to Learn More? Interested to see how Aptean EAM can help you better manage your assets? Contact us at info@aptean.com or visit www.aptean.com.

Aptean is one of the world’s leading providers of purpose-built, industry-specific software that helps manufacturers and distributors effectively run and grow their businesses. With both cloud and on-premise deployment options, Aptean’s products, services and unmatched expertise help businesses of all sizes to be Ready for What’s Next, Now®. Aptean is headquartered in Alpharetta, Georgia and has offices in North America, Europe and Asia-Pacific. To learn more about Aptean and the markets we serve, visit www.aptean.com. Copyright @ Aptean 2022. All rights reserved. 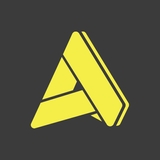