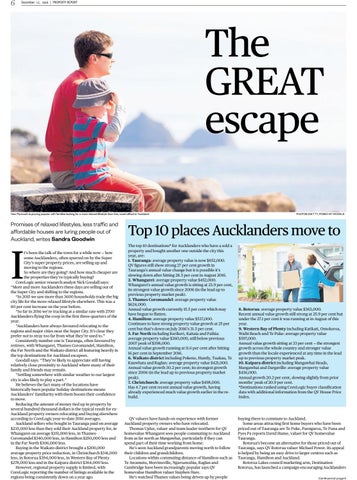 The GREAT escape New Plymouth is proving popular with families looking for a more relaxed lifestyle than they could afford in Auckland.

t’s been the talk of the town for a while now — how some Aucklanders, often spurred on by the Super City’s super property prices, are selling up and moving to the regions. So where are they going? And how much cheaper are the properties they’re typically buying? CoreLogic senior research analyst Nick Goodall says: “More and more Aucklanders these days are selling out of the Super City and shifting to the regions. “In 2015 we saw more than 3600 households trade the big city life for the more relaxed lifestyle elsewhere. This was a 60 per cent increase on the year before. “So far in 2016 we’re tracking at a similar rate with 2700 Aucklanders flying the coop in the first three-quarters of the year. “Aucklanders have always favoured relocating to the regions and major cities near the Super City. It’s clear they prefer not to stray too far from what they’re used to.” Consistently number one is Tauranga, often favoured by retirees, with Whangarei, Thames Coromandel, Hamilton, the Far North and the Waikato district all featuring heavily in the top destinations for Auckland escapees. Goodall says: “They’re likely to appreciate still having relatively close proximity to Auckland where many of their family and friends may remain. “Settling somewhere with similar weather to our largest city is also likely to play a part.” He believes the fact many of the locations have historically been popular holiday destinations means Aucklanders’ familiarity with them boosts their confidence to move. Reducing the amount of money tied up in property by several hundred thousand dollars is the typical result for exAuckland property owners relocating and buying elsewhere according to CoreLogic year-to-date 2016 averages. Auckland sellers who bought in Tauranga paid on average $235,000 less than they sold their Auckland property for, in Whangarei on average $351,000 less, in ThamesCoromandel $340,000 less, in Hamilton $250,000 less and in the Far North $306,000 less. Buying in the Waikato district brought a $200,000 average property price reduction, in Christchurch $341,000 less, in Rotorua $394,000 less, in Western Bay of Plenty $278,000 less and in the Kaipara district $364,000 less. However, regional property supply is limited, with CoreLogic reporting the number of listings available in the regions being consistently down on a year ago.

QV valuers have hands-on experience with former Auckland property owners who have relocated. Thomas Ujdur, valuer and team leader northern for QV homevalue Whangarei sees people commuting to Auckland from as far north as Mangawhai, particularly if they can spend part of their time working from home. He’s seen Auckland grandparents moving north to follow their children and grandchildren. Locations within commuting distance of Hamilton such as Te Awamutu, Morrinsville, Ngaruawahia, Raglan and Cambridge have been increasingly popular says QV homevalue Hamilton valuer Stephen Hare. He’s watched Thames values being driven up by people

8. Rotorua: average property value $363,000. Recent annual value growth still strong at 25.9 per cent but under the 27.1 per cent it was running at in August of this year. 9. Western Bay of Plenty including Katikati, Omokoroa, Waihi Beach and Te Puke: average property value $597,000. Annual value growth sitting at 33 per cent — the strongest growth across the whole country and stronger value growth than the locale experienced at any time in the lead up to previous property market peak. 10. Kaipara district including Mangawhai Heads, Mangawhai and Dargaville: average property value $436,000. Annual growth 20.2 per cent, slowing slightly from prior months’ peak of 20.9 per cent. *Destinations ranked using CoreLogic buyer classification data with additional information from the QV House Price Index.

buying there to commute to Auckland. Some areas attracting first home buyers who have been priced out of Tauranga are Te Puke, Paengaroa, Te Puna and Pyes Pa reports David Hume, valuer for QV homevalue Tauranga. Rotorua’s become an alternative for those priced out of Tauranga, says QV Rotorua valuer Michael Power. Its appeal is helped by being an easy drive to larger centres such as Tauranga, Hamilton and Auckland. Rotorua Lakes council marketing arm, Destination Rotorua, has launched a campaign encouraging Aucklanders Continued on page 8