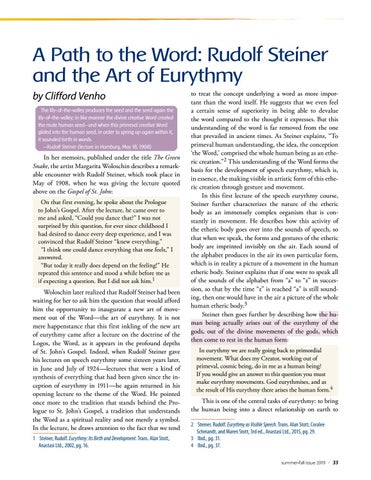 A Path to the Word: Rudolf Steiner and the Art of Eurythmy by Clifford Venho The lily-of-the-valley produces the seed and the seed again the lily-of-the-valley; in like manner the divine creative Word created the mute human seed—and when this primeval creative Word glided into the human seed, in order to spring up again within it, it sounded forth in words.   —Rudolf Steiner (lecture in Hamburg, May 18, 1908)

In her memoirs, published under the title The Green Snake, the artist Margarita Woloschin describes a remarkable encounter with Rudolf Steiner, which took place in May of 1908, when he was giving the lecture quoted above on the Gospel of St. John: On that first evening, he spoke about the Prologue to John’s Gospel. After the lecture, he came over to me and asked, “Could you dance that?” I was not surprised by this question, for ever since childhood I had desired to dance every deep experience, and I was convinced that Rudolf Steiner “knew everything.” “I think one could dance everything that one feels,” I answered. “But today it really does depend on the feeling!” He repeated this sentence and stood a while before me as if expecting a question. But I did not ask him.1

Woloschin later realized that Rudolf Steiner had been waiting for her to ask him the question that would afford him the opportunity to inaugurate a new art of movement out of the Word—the art of eurythmy. It is not mere happenstance that this first inkling of the new art of eurythmy came after a lecture on the doctrine of the Logos, the Word, as it appears in the profound depths of St. John’s Gospel. Indeed, when Rudolf Steiner gave his lectures on speech eurythmy some sixteen years later, in June and July of 1924—lectures that were a kind of synthesis of everything that had been given since the inception of eurythmy in 1911—he again returned in his opening lecture to the theme of the Word. He pointed once more to the tradition that stands behind the Prologue to St. John’s Gospel, a tradition that understands the Word as a spiritual reality and not merely a symbol. In the lecture, he draws attention to the fact that we tend 1 Steiner, Rudolf. Eurythmy: Its Birth and Development. Trans. Alan Stott, Anastasi Ltd., 2002, pg. 16.

to treat the concept underlying a word as more important than the word itself. He suggests that we even feel a certain sense of superiority in being able to devalue the word compared to the thought it expresses. But this understanding of the word is far removed from the one that prevailed in ancient times. As Steiner explains, “To primeval human understanding, the idea, the conception ‘the Word,’ comprised the whole human being as an etheric creation.”2 This understanding of the Word forms the basis for the development of speech eurythmy, which is, in essence, the making visible in artistic form of this etheric creation through gesture and movement. In this first lecture of the speech eurythmy course, Steiner further characterizes the nature of the etheric body as an immensely complex organism that is constantly in movement. He describes how this activity of the etheric body goes over into the sounds of speech, so that when we speak, the forms and gestures of the etheric body are imprinted invisibly on the air. Each sound of the alphabet produces in the air its own particular form, which is in reality a picture of a movement in the human etheric body. Steiner explains that if one were to speak all of the sounds of the alphabet from “a” to “z” in succession, so that by the time “z” is reached “a” is still sounding, then one would have in the air a picture of the whole human etheric body.3 Steiner then goes further by describing how the human being actually arises out of the eurythmy of the gods, out of the divine movements of the gods, which then come to rest in the human form: In eurythmy we are really going back to primordial movement. What does my Creator, working out of primeval, cosmic being, do in me as a human being? If you would give an answer to this question you must make eurythmy movements. God eurythmises, and as the result of His eurythmy there arises the human form.4 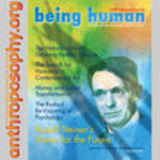