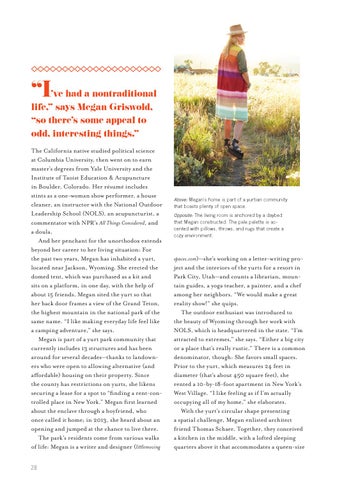 “I’ve had a nontraditional life,” says Megan Griswold, “so there’s some appeal to odd, interesting things.” The California native studied political science at Columbia University, then went on to earn master’s degrees from Yale University and the Institute of Taoist Education &amp; Acupuncture in Boulder, Colorado. Her résumé includes stints as a one-woman show performer, a house cleaner, an instructor with the National Outdoor Leadership School (NOLS), an acupuncturist, a commentator with NPR’s All Things Considered, and a doula. And her penchant for the unorthodox extends beyond her career to her living situation: For the past two years, Megan has inhabited a yurt, located near Jackson, Wyoming. She erected the domed tent, which was purchased as a kit and sits on a platform, in one day, with the help of about 15 friends. Megan sited the yurt so that her back door frames a view of the Grand Teton, the highest mountain in the national park of the same name. “I like making everyday life feel like a camping adventure,” she says. Megan is part of a yurt park community that currently includes 13 structures and has been around for several decades—thanks to landowners who were open to allowing alternative (and affordable) housing on their property. Since the county has restrictions on yurts, she likens securing a lease for a spot to “finding a rent-controlled place in New York.” Megan first learned about the enclave through a boyfriend, who once called it home; in 2013, she heard about an opening and jumped at the chance to live there. The park’s residents come from various walks of life: Megan is a writer and designer (littlemoving 28

Above: Megan’s home is part of a yurtian community

that boasts plenty of open space. Opposite: The living room is anchored by a daybed

that Megan constructed. The pale palette is accented with pillows, throws, and rugs that create a cozy environment.

spaces.com)—she’s working on a letter-writing project and the interiors of the yurts for a resort in Park City, Utah—and counts a librarian, mountain guides, a yoga teacher, a painter, and a chef among her neighbors. “We would make a great reality show!” she quips. The outdoor enthusiast was introduced to the beauty of Wyoming through her work with NOLS, which is headquartered in the state. “I’m attracted to extremes,” she says. “Either a big city or a place that’s really rustic.” There is a common denominator, though: She favors small spaces. Prior to the yurt, which measures 24 feet in diameter (that’s about 450 square feet), she rented a 10-by-18-foot apartment in New York’s West Village. “I like feeling as if I’m actually occupying all of my home,” she elaborates. With the yurt’s circular shape presenting a spatial challenge, Megan enlisted architect friend Thomas Schaer. Together, they conceived a kitchen in the middle, with a lofted sleeping quarters above it that accommodates a queen-size

Anthology Magazine was a home and lifestyle print magazine that explored a theme in every issue. In this online preview, we showed you a glimpse of the content in our final issue, No. 21 (Fall 2015), "Forward Thinking." The complete print version of this issue is 136 pages. 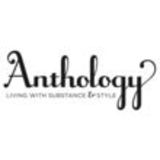