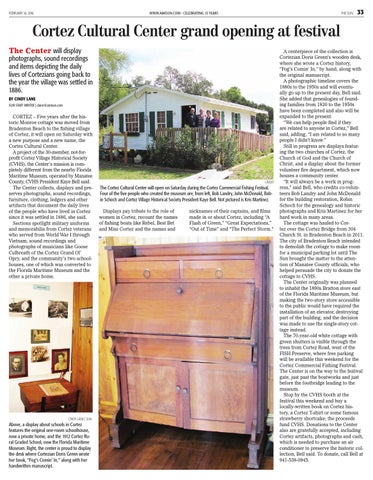 Cortez Cultural Center grand opening at festival The Center will display photographs, sound recordings and items depicting the daily lives of Cortezians going back to the year the village was settled in 1886. BY CINDY LANE SUN STAFF WRITER | clane@amisun.com

CORTEZ – Five years after the historic Monroe cottage was moved from Bradenton Beach to the fishing village of Cortez, it will open on Saturday with a new purpose and a new name, the Cortez Cultural Center. A project of the 30-member, not-forprofit Cortez Village Historical Society (CVHS), the Center’s mission is completely different from the nearby Florida Maritime Museum, operated by Manatee County, CVHS President Kaye Bell said. The Center collects, displays and preserves photographs, sound recordings, furniture, clothing, ledgers and other artifacts that document the daily lives of the people who have lived in Cortez since it was settled in 1886, she said. Sections spotlight military uniforms and memorabilia from Cortez veterans who served from World War I through Vietnam, sound recordings and photographs of musicians like Goose Culbreath of the Cortez Grand Ol’ Opry, and the community’s two schoolhouses, one of which was converted to the Florida Maritime Museum and the other a private home.

Above, a display about schools in Cortez features the original one-room schoolhouse, now a private home, and the 1912 Cortez Rural Graded School, now the Florida Maritime Museum. Right, the center is proud to display the desk where Cortezian Doris Green wrote her book, “Fog’s Comin’ In,” along with her handwritten manuscript.

The Cortez Cultural Center will open on Saturday during the Cortez Commercial Fishing Festival. Four of the five people who created the museum are, from left, Bob Landry, John McDonald, Robin Schoch and Cortez Village Historical Society President Kaye Bell. Not pictured is Kris Martinez. Displays pay tribute to the role of women in Cortez, recount the names of fishing boats like Rebel, Best Bet and Miss Cortez and the names and

nicknames of their captains, and films made in or about Cortez, including “A Flash of Green,” “Great Expectations,” “Out of Time” and “The Perfect Storm.”

A centerpiece of the collection is Cortezian Doris Green’s wooden desk, where she wrote a Cortez history, “Fog’s Comin’ In,” by hand, along with the original manuscript. A photographic timeline covers the 1880s to the 1950s and will eventually go up to the present day, Bell said. She added that genealogies of founding families from 1830 to the 1950s have been completed and also will be expanded to the present. “We can help people find if they are related to anyone in Cortez,” Bell said, adding, “I am related to so many people I didn’t know.” Still in progress are displays featuring the two churches of Cortez, the Church of God and the Church of Christ, and a display about the former volunteer fire department, which now houses a community center. “It will always be a work in progress,” said Bell, who credits co-volunteers Bob Landry and John McDonald for the building restoration, Robin Schoch for the genealogy and historic photographs and Kris Martinez for her hard work in many areas. The cottage was hauled to Cortez over the Cortez Bridge from 304 Church St. in Bradenton Beach in 2011. The city of Bradenton Beach intended to demolish the cottage to make room for a municipal parking lot until The Sun brought the matter to the attention of Manatee County officials, who helped persuade the city to donate the cottage to CVHS. The Center originally was planned to inhabit the 1890s Bratton store east of the Florida Maritime Museum, but making the two-story store accessible to the public would have required the installation of an elevator, destroying part of the building, and the decision was made to use the single-story cottage instead. The 70-year-old white cottage with green shutters is visible through the trees from Cortez Road, west of the FISH Preserve, where free parking will be available this weekend for the Cortez Commercial Fishing Festival. The Center is on the way to the festival gate, just past the boatworks and just before the footbridge leading to the museum. Stop by the CVHS booth at the festival this weekend and buy a locally-written book on Cortez history, a Cortez T-shirt or some famous strawberry shortcake; the proceeds fund CVHS. Donations to the Center also are gratefully accepted, including Cortez artifacts, photographs and cash, which is needed to purchase an air conditioner to preserve the historic collection, Bell said. To donate, call Bell at 941-538-0945. 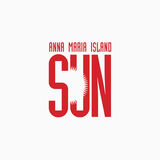