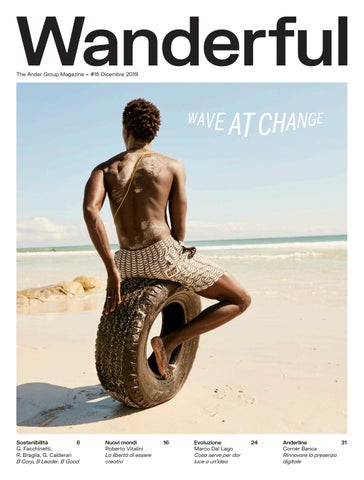 New editors like to rearrange the furniture; I was one of the new scatter cushions introduced to the office by Andy. A few months into the job, while reporting a story in Malawi, Andy sent me an email saying the magazine was being sued. I told him to stop with his pranks. “No dude, I’m serious,” he wrote back. So serious, in fact, Andy hadn’t informed the publisher. Having studied law, not journalism, I suggested we extinguish the fire ourselves by meeting with the complainant. “That was a bit like taking a poodle to an illegal pit-bull fight,” Andy remarked when we left the lawyer’s office.

Now an established surf publisher, music promoter and fashion entrepreneur based in the Indian Ocean port city of Durban, in 2002 Andy was a recent graduate of University of Cape Town, where he had studied writing under the Nobel literature laureate JM Coetzee. Andy’s gonzo approach to journalism included entering a beach beauty contest in leopard-print briefs. The article that followed secured him a national journalism award – and an offer to edit the youth-lifestyle magazine SL when it relocated to his birthplace, Johannesburg.

The Aare River doesn’t have surfing waves, but what it lacks in rideable breakers it certainly makes up for in congeniality. A couple of summers ago, I was lazily floating down this milky-green river in Bern with an art critic from New York, chatting about the outrage and insults that flow from writing about living people. He told me about the time, walking down Broadway, someone he’d written about shouted, “You germ.” Is that all, I thought? Shortly after passing the Bärengraben, I shared my story about the time I was sued for a story printed by Andy Davis

“So you lost?” the New York critic fairly wondered as my story ran out of river. Nope, I replied, it ended swiftly. While the publisher raged, Andy dipped into his black book. A young lawyer friend told the vexatious litigants in which cave to hide. “Oh,” sniffed the art critic as he towelled himself down. “I suppose the magazine never used you again?” Wrong again, Mr Wolfe. Andy paid my fee and kept using me. In fact, he even invited me to his wedding.

So what have we learnt so far? Andy is Swiss by marriage, he can write and sing, and for a moment his story was stranded in the semi-desert of Johannesburg. I’ll speed up. In 2003, after an acrimonious bust up with his publisher, who refused to feature a black model on the cover, Andy quit his job as editor and returned to Cape Town. The newlyweds settled in Kommetjie, a far-flung Cape Town beach community about the distance of Lucerne from Zürich.

“I did a mind map of aspiration, I listed three things: a music festival, a magazine, and a surf brand.”

Johannesburg has no Alps, just mustard yellow mine dumps and a vast ridge like the bristling spine of an angry dog. Andy grew up in a fancy stone house on this ridge, which separates South Africa’s largest and most prosperous city into a north and a south. He also married his Zurich-born wife, Susie, in this house, on a veranda that looks north towards Africa’s interior. Actually, being Jewish, he was formally married in private. The celebration I attended was just to show off Andy’s singing skills. Literally. Midway through the wedding bacchanal, Andy, backed by Tidal Waves, a reggae band he briefly managed, serenaded Susie.

“I did a mind map of aspiration,” recalls Andy. “I listed three things: a music festival, a magazine, and a surf brand.” A decade and a half later, Andy has achieved all three goals. He is co-owner of Zigzag, South Africa’s oldest surf magazine. He is co-founder of the annual Zakifo music festival in Durban, which has now successfully staged five editions. And, he is a partner in Mami Wata, a righteous surf clothing and accessories brand that – bucking trends – manufactures in South Africa. Arriving at this happy place, married with two daughters, living in Durban, where his work uniform comprises flip-flops, boardshorts and a T-shirt, was never certain.

“I learnt a lot about how branded communication works.” “When I moved back to Cape Town I freelanced, doing editorial content work for a local bank, as well as big international brands like Levis and Red Bull,” says Andy. His tie up with Red Bull was especially influential. A surfer since his teens, his first project with the Austrian energy drink brand was Red Bull Big Wave Africa. “It gave me a good start in surfing, introduced me to surfers, and showed me how a big brand works.” He also attended a Red Bull Music Academy, a travelling music workshop and festival. “I learnt a lot about how branded communication works.” It can and must be fun, he realised. The global recession of 2008 pulled the carpet on his early career as a corporate journalist. Still based in Kommetjie, Andy started Mahala, a largely web-based magazine that produced essays on “music, culture and reality”. Pitched at a youth market, it showcased young writers with a spirited (some thought obnoxious) flair for words. “When we did it right, it allowed writers to communicate freely on subjects that mattered,” says Andy. Mahala’s best stories, he says, had a social urgency: a courageous series on drug use in Durban, another on traditional stick fighting in Cape Town. Mahala emerged during a tentative flourishing of South African arts and culture heralded by Gavin Hood’s 2005 film Tsotsi, which won the 2006 Academy Award for best international feature film. In his review of Neill Blomkamp’s 2009 sci-fi film District Nine, Andy predicted: “A golden age of South African film should now follow.” It didn’t. While export-grade musical acts like rapper Spoek Mathambo and hip hop group Die Antwoord flourished abroad, Mahala struggled. “I didn’t have experience,” admits Andy. “Online publishing is a hungry monster. We had great writers, but very little advertising support. We also gave everything away for free. We grew from 10,000 to 20,000 users, and then 50,000 to 80,000, always believing success was just around the corner.” It wasn’t. “Mahala was like a six-year MBA at the university of hard knocks, where you pay double for your courses. It hurt to close it.” Disillusioned with perishable journalism, Andy started research on a book. In 2013 he travelled to Zimbabwe to research a massacre of members of his extended family. It was the zenith of the neurotic presidency of dictator Robert Mugabe. Andy was arrested for practicing journalism without a permit. He spent three days in a prison near Bulawayo. “It was strange, funny and terrifying, like a mouse being played with by a cat,” he admits. Andy escaped serious prison time by telling the magistrate he owned a surf store in Kommetjie. Back in Cape Town, he connected with an old school friend, Will Marshall-Smith, a venture capitalist and surfer with

international audience. Mami Wata has recently tied up wholesale distribution in the United States. “We are going the VC route to scale quickly.” The brand’s pitch has three pillars: support local manufacturing, grow the aura of Africa as a viable surf destination, and spread the gospel of surf to the continent’s needy. Mami Wata supports Waves for Change, a surf therapy organisation founded in Cape Town in 2009 by Tim Conibear that reaches over 1000 less-privileged children daily through its programmes and projects. “Mami Wata is lovely cumulonimbus of hope,” says Andy. Once a reason to skip work duties as a cub reporter, surfing has become a viable way of living for Andy. “I have become a surf existentialist,” he admits. “Surfing invigorates. You never hit the bottom. If the conditions are good, you just want to get out there. If I have spare money, I know what to do with it: go to Hawaii, Indonesia, Madagascar. It is not like golf.” He describes how on a recent business trip to New York he caught a kneehigh runner on a longboard, under the planes landing at JFK. “It was brilliant.” ∙

a shine for media companies. Andy whispered some ideas into Will’s ear. He smiled. The two bought Zigzag. Started in 1976, the magazine has six staff and produces eight issues per year. “It is a good magazine with a core audience and advertisers. It has 43 years of momentum.” The craft of a print magazine is important to Andy. “Knowledge of print is dying out. We teach newbies weaned on social media how to colour correct and use InDesign. It is a solid, blue-collar job that pays a salary. You have to work hard but I also never get tired of it.” Like Zigzag, his music festival is also ticking along nicely. This year Zakifo, which foregrounds African musical talent, included American singer-songwriter Ben Harper as a headline act. The outlier in his basket of projects is Mami Wata. A three-way partnership between Andy, Nick Dutton and Peet Pienaar, the surf brand takes its name from a West African water deity known as Mami Wata. “Our aim is to be the first big African surf brand,” says Andy. “The appetite for what we are doing is immense.” As it stands the brand’s footprint is still small, with one retail store in Cape Town, and an online store catering to

The beach is a place of beginnings and ends. It is where those unseen energies blowing over the world’s seas and oceans transform and culminate in a familiar sound, one that can be heard anywhere in the world. This repeating cycle, of waves endlessly forming and loudly breaking in shallow waters, is a democratic idea. Honour the wave. It is more than a source of pleasure, but holds the possibility of true completion. Riding the wave to fulfilment isn’t easy: it requires commitment and repetition. Start on a small wave, but never lose sight of your ambition to master the big wave of life.

Quality of Life for Our People

Quality of Life in Our Communities

Quality of Life in Our Environment

Quality of Life for Our Patients

I vantaggi per i clienti...

#14 The Border of Dreams