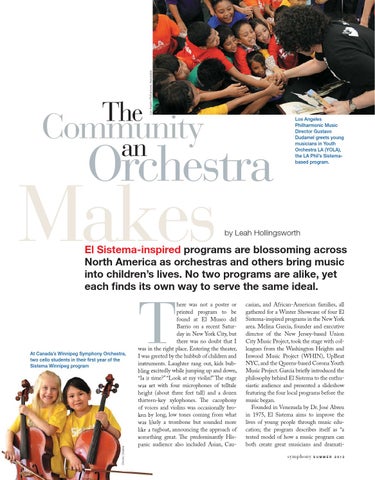 El Sistema-inspired programs are blossoming across North America as orchestras and others bring music into children’s lives. No two programs are alike, yet each finds its own way to serve the same ideal.

here was not a poster or printed program to be found at El Museo del Barrio on a recent Saturday in New York City, but there was no doubt that I was in the right place. Entering the theater, I was greeted by the hubbub of children and instruments. Laughter rang out, kids bubbling excitedly while jumping up and down, “Is it time?” “Look at my violin!” The stage was set with four microphones of telltale height (about three feet tall) and a dozen thirteen-key xylophones. The cacophony of voices and violins was occasionally broken by long, low tones coming from what was likely a trombone but sounded more like a tugboat, announcing the approach of something great. The predominantly Hispanic audience also included Asian, Cau-

casian, and African-American families, all gathered for a Winter Showcase of four El Sistema-inspired programs in the New York area. Melina Garcia, founder and executive director of the New Jersey-based Union City Music Project, took the stage with colleagues from the Washington Heights and Inwood Music Project (WHIN), UpBeat NYC, and the Queens-based Corona Youth Music Project. Garcia briefly introduced the philosophy behind El Sistema to the enthusiastic audience and presented a slideshow featuring the four local programs before the music began. Founded in Venezuela by Dr. José Abreu in 1975, El Sistema aims to improve the lives of young people through music education; the program describes itself as “a tested model of how a music program can both create great musicians and dramatisymphony