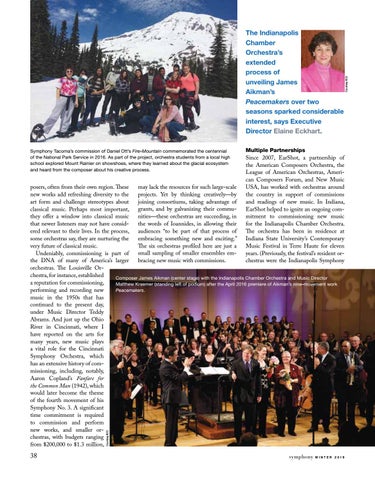 Symphony Tacoma’s commission of Daniel Ott’s Fire-Mountain commemorated the centennial of the National Park Service in 2016. As part of the project, orchestra students from a local high school explored Mount Rainier on showshoes, where they learned about the glacial ecosystem and heard from the composer about his creative process.

Since 2007, EarShot, a partnership of the American Composers Orchestra, the League of American Orchestras, Ameri­ can Composers Forum, and New Music USA, has worked with orchestras around the country in support of commissions and readings of new music. In Indiana, EarShot helped to ignite an ongoing com­ mitment to commissioning new music for the Indianapolis Chamber Orchestra. The orchestra has been in residence at Indiana State University’s Contemporary Music Festival in Terre Haute for eleven years. (Previously, the festival’s resident or­ chestras were the Indianapolis Symphony

may lack the resources for such large-scale posers, often from their own region. These projects. Yet by thinking creatively—by new works add refreshing diversity to the joining consortiums, taking advantage of art form and challenge stereotypes about grants, and by galvanizing their commu­ classical music. Perhaps most important, nities—these orchestras are succeeding, in they offer a window into classical music the words of Ioannides, in allowing their that newer listeners may not have consid­ audiences “to be part of that process of ered relevant to their lives. In the process, embracing something new and exciting.” some orchestras say, they are nurturing the The six orchestras profiled here are just a very future of classical music. small sampling of smaller ensembles em­ Undeniably, commissioning is part of bracing new music with commissions. the DNA of many of America’s larger orchestras. The Louisville Or­ chestra, for instance, established Composer James Aikman (center stage) with the Indianapolis Chamber Orchestra and Music Director a reputation for commissioning, Matthew Kraemer (standing left of podium) after the April 2016 premiere of Aikman’s nine-movement work performing and recording new Peacemakers. music in the 1950s that has continued to the present day, under Music Director Teddy Abrams. And just up the Ohio River in Cincinnati, where I have reported on the arts for many years, new music plays a vital role for the Cincinnati Symphony Orchestra, which has an extensive history of com­ missioning, including, notably, Aaron Copland’s Fanfare for the Common Man (1942), which would later become the theme of the fourth movement of his Symphony No. 3. A significant time commitment is required to commission and perform new works, and smaller or­ chestras, with budgets ranging from $200,000 to $1.3 million,