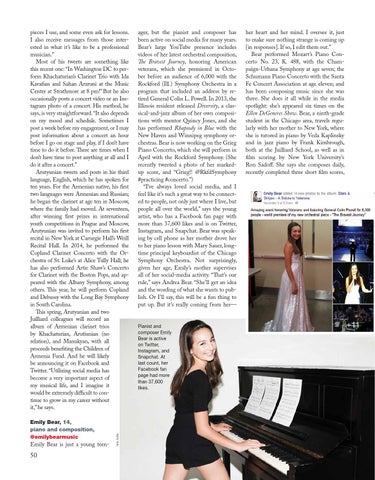 ager, but the pianist and composer has been active on social media for many years. Bear’s large YouTube presence includes videos of her latest orchestral composition, The Bravest Journey, honoring American veterans, which she premiered in October before an audience of 6,000 with the Rockford (Ill.) Symphony Orchestra in a program that included an address by retired General Colin L. Powell. In 2013, the Illinois resident released Diversity, a classical-and-jazz album of her own compositions with mentor Quincy Jones, and she has performed Rhapsody in Blue with the New Haven and Winnipeg symphony orchestras. Bear is now working on the Grieg Piano Concerto, which she will perform in April with the Rockford Symphony. (She recently tweeted a photo of her markedup score, and “Grieg!! @RkfdSymphony #practicing #concerto.”) “I’ve always loved social media, and I feel like it’s such a great way to be connected to people, not only just where I live, but people all over the world,” says the young artist, who has a Facebook fan page with more than 37,600 likes and is on Twitter, Instagram, and Snapchat. Bear was speaking by cell phone as her mother drove her to her piano lesson with Mary Sauer, longtime principal keyboardist of the Chicago Symphony Orchestra. Not surprisingly, given her age, Emily’s mother supervises all of her social-media activity. “That’s our rule,” says Andrea Bear. “She’ll get an idea and the wording of what she wants to publish. Or I’ll say, this will be a fun thing to put up. But it’s really coming from her—

her heart and her mind. I oversee it, just to make sure nothing strange is coming up [in responses]. If so, I edit them out.” Bear performed Mozart’s Piano Concerto No. 23, K. 488, with the Champaign-Urbana Symphony at age seven; the Schumann Piano Concerto with the Santa Fe Concert Association at age eleven; and has been composing music since she was three. She does it all while in the media spotlight: she’s appeared six times on the Ellen DeGeneres Show. Bear, a ninth-grade student in the Chicago area, travels regularly with her mother to New York, where she is tutored in piano by Veda Kaplinsky and in jazz piano by Frank Kimbrough, both at the Juilliard School, as well as in film scoring by New York University’s Ron Sadoff. She says she composes daily, recently completed three short film scores,

pieces I use, and some even ask for lessons. I also receive messages from those interested in what it’s like to be a professional musician.” Most of his tweets are something like this recent one: “In Washington DC to perform Khachaturian’s Clarinet Trio with Ida Kavafian and Sahan Arzruni at the Music Center at Strathmore at 8 pm!” But he also occasionally posts a concert video or an Instagram photo of a concert. His method, he says, is very straightforward. “It also depends on my mood and schedule. Sometimes I post a week before my engagement, or I may post information about a concert an hour before I go on stage and play, if I don’t have time to do it before. There are times when I don’t have time to post anything at all and I do it after a concert.” Arutyunian tweets and posts in his third language, English, which he has spoken for ten years. For the Armenian native, his first two languages were Armenian and Russian; he began the clarinet at age ten in Moscow, where the family had moved. At seventeen, after winning first prizes in international youth competitions in Prague and Moscow, Arutyunian was invited to perform his first recital in New York at Carnegie Hall’s Weill Recital Hall. In 2014, he performed the Copland Clarinet Concerto with the Orchestra of St. Luke’s at Alice Tully Hall; he has also performed Artie Shaw’s Concerto for Clarinet with the Boston Pops, and appeared with the Albany Symphony, among others. This year, he will perform Copland and Debussy with the Long Bay Symphony in South Carolina. This spring, Arutyunian and two Juilliard colleagues will record an album of Armenian clarinet trios by Khachaturian, Arutiunian (no relation), and Manukyan, with all proceeds benefiting the Children of Armenia Fund. And he will likely be announcing it on Facebook and Twitter. “Utilizing social media has become a very important aspect of my musical life, and I imagine it would be extremely difficult to continue to grow in my career without it,” he says.