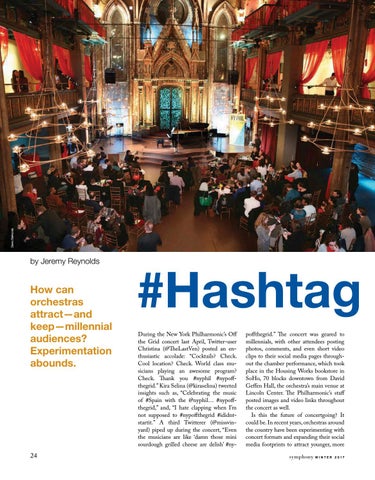 #Hashtag During the New York Philharmonic’s Off the Grid concert last April, Twitter-user Christina (@TheLastVen) posted an enthusiastic accolade: “Cocktails? Check. Cool location? Check. World class musicians playing an awesome program? Check. Thank you #nyphil #nypoffthegrid.” Kira Selina (@kiraselina) tweeted insights such as, “Celebrating the music of #Spain with the @nyphil… #nypoffthegrid,” and, “I hate clapping when I’m not supposed to #nypoffthegrid #ididntstartit.” A third Twitterer (@missvinyard) piped up during the concert, “Even the musicians are like ‘damn those mini sourdough grilled cheese are delish’ #ny-

poffthegrid.” The concert was geared to millennials, with other attendees posting photos, comments, and even short video clips to their social media pages throughout the chamber performance, which took place in the Housing Works bookstore in SoHo, 70 blocks downtown from David Geffen Hall, the orchestra’s main venue at Lincoln Center. The Philharmonic’s staff posted images and video links throughout the concert as well. Is this the future of concertgoing? It could be. In recent years, orchestras around the country have been experimenting with concert formats and expanding their social media footprints to attract younger, more symphony