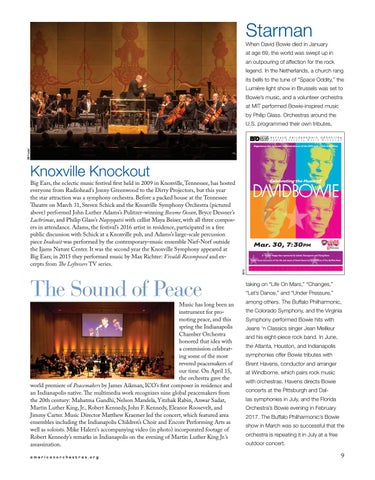 Starman When David Bowie died in January at age 69, the world was swept up in an outpouring of affection for the rock legend. In the Netherlands, a church rang its bells to the tune of “Space Oddity,” the Lumière light show in Brussels was set to Bowie’s music, and a volunteer orchestra at MIT performed Bowie-inspired music by Philip Glass. Orchestras around the

U.S. programmed their own tributes,

Big Ears, the eclectic music festival first held in 2009 in Knoxville, Tennessee, has hosted everyone from Radiohead’s Jonny Greenwood to the Dirty Projectors, but this year the star attraction was a symphony orchestra. Before a packed house at the Tennessee Theatre on March 31, Steven Schick and the Knoxville Symphony Orchestra (pictured above) performed John Luther Adams’s Pulitzer-winning Become Ocean, Bryce Dessner’s Lachrimae, and Philip Glass’s Naqoyqatsi with cellist Maya Beiser, with all three composers in attendance. Adams, the festival’s 2016 artist in residence, participated in a free public discussion with Schick at a Knoxville pub, and Adams’s large-scale percussion piece Inuksuit was performed by the contemporary-music ensemble Nief-Norf outside the Ijams Nature Center. It was the second year the Knoxville Symphony appeared at Big Ears; in 2015 they performed music by Max Richter: Vivaldi Recomposed and excerpts from The Leftovers TV series.

The Sound of Peace

Music has long been an instrument for promoting peace, and this spring the Indianapolis Chamber Orchestra honored that idea with a commission celebrating some of the most revered peacemakers of our time. On April 15, the orchestra gave the world premiere of Peacemakers by James Aikman, ICO’s first composer in residence and an Indianapolis native. The multimedia work recognizes nine global peacemakers from the 20th century: Mahatma Gandhi, Nelson Mandela, Yitzhak Rabin, Anwar Sadat, Martin Luther King, Jr., Robert Kennedy, John F. Kennedy, Eleanor Roosevelt, and Jimmy Carter. Music Director Matthew Kraemer led the concert, which featured area ensembles including the Indianapolis Children’s Choir and Encore Performing Arts as well as soloists. Mike Halerz’s accompanying video (in photo) incorporated footage of Robert Kennedy’s remarks in Indianapolis on the evening of Martin Luther King Jr.’s assassination. americanorchestras.org

taking on “Life On Mars,” “Changes,” “Let’s Dance,” and “Under Pressure,” among others. The Buffalo Philharmonic, the Colorado Symphony, and the Virginia Symphony performed Bowie hits with Jeans ’n Classics singer Jean Meilleur and his eight-piece rock band. In June, the Atlanta, Houston, and Indianapolis symphonies offer Bowie tributes with Brent Havens, conductor and arranger at Windborne, which pairs rock music with orchestras. Havens directs Bowie concerts at the Pittsburgh and Dallas symphonies in July, and the Florida Orchestra’s Bowie evening in February 2017. The Buffalo Philharmonic’s Bowie show in March was so successful that the orchestra is repeating it in July at a free outdoor concert.