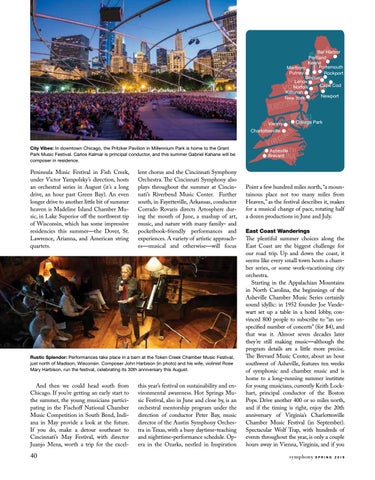 City Vibes: In downtown Chicago, the Pritzker Pavilion in Millennium Park is home to the Grant Park Music Festival. Carlos Kalmar is principal conductor, and this summer Gabriel Kahane will be composer in residence.

Peninsula Music Festival in Fish Creek, under Victor Yampolsky’s direction, hosts an orchestral series in August (it’s a long drive, an hour past Green Bay). An even longer drive to another little bit of summer heaven is Madeline Island Chamber Music, in Lake Superior off the northwest tip of Wisconsin, which has some impressive residencies this summer—the Dover, St. Lawrence, Arianna, and American string quartets.

lent chorus and the Cincinnati Symphony Orchestra. The Cincinnati Symphony also plays throughout the summer at Cincinnati’s Riverbend Music Center. Further south, in Fayetteville, Arkansas, conductor Corrado Rovaris directs Artosphere during the month of June, a mashup of art, music, and nature with many family- and pocketbook-friendly performances and experiences. A variety of artistic approaches—musical and otherwise—will focus

And then we could head south from Chicago. If you’re getting an early start to the summer, the young musicians participating in the Fischoff National Chamber Music Competition in South Bend, Indiana in May provide a look at the future. If you do, make a detour southeast to Cincinnati’s May Festival, with director Juanjo Mena, worth a trip for the excel-

this year’s festival on sustainability and environmental awareness. Hot Springs Music Festival, also in June and close by, is an orchestral mentorship program under the direction of conductor Peter Bay, music director of the Austin Symphony Orchestra in Texas, with a busy daytime-teaching and nighttime-performance schedule. Opera in the Ozarks, nestled in Inspiration

Point a few hundred miles north, “a mountainous place not too many miles from Heaven,” as the festival describes it, makes for a musical change of pace, rotating half a dozen productions in June and July. East Coast Wanderings

The plentiful summer choices along the East Coast are the biggest challenge for our road trip. Up and down the coast, it seems like every small town hosts a chamber series, or some work-vacationing city orchestra. Starting in the Appalachian Mountains in North Carolina, the beginnings of the Asheville Chamber Music Series certainly sound idyllic: in 1952 founder Joe Vandewart set up a table in a hotel lobby, convinced 800 people to subscribe to “an unspecified number of concerts” (for $4), and that was it. Almost seven decades later they’re still making music—although the program details are a little more precise. The Brevard Music Center, about an hour southwest of Asheville, features ten weeks of symphonic and chamber music and is home to a long-running summer institute for young musicians, currently Keith Lockhart, principal conductor of the Boston Pops. Drive another 400 or so miles north, and if the timing is right, enjoy the 20th anniversary of Virginia’s Charlottesville Chamber Music Festival (in September). Spectacular Wolf Trap, with hundreds of events throughout the year, is only a couple hours away in Vienna, Virginia, and if you symphony