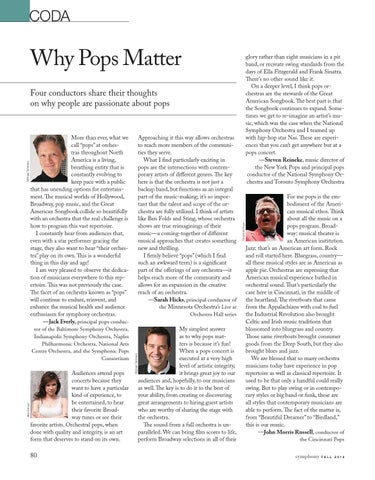 glory rather than eight musicians in a pit band, or recreate swing standards from the days of Ella Fitzgerald and Frank Sinatra. There’s no other sound like it. On a deeper level, I think pops orchestras are the stewards of the Great American Songbook. The best part is that the Songbook continues to expand. Sometimes we get to re-imagine an artist’s music, which was the case when the National Symphony Orchestra and I teamed up with hip-hop star Nas. These are experiences that you can’t get anywhere but at a pops concert. —Steven Reineke, music director of the New York Pops and principal pops conductor of the National Symphony Orchestra and Toronto Symphony Orchestra

Audiences attend pops concerts because they want to have a particular kind of experience, to be entertained, to hear their favorite Broadway tunes or see their favorite artists. Orchestral pops, when done with quality and integrity, is an art form that deserves to stand on its own.

Approaching it this way allows orchestras to reach more members of the communities they serve. What I find particularly exciting in pops are the intersections with contemporary artists of different genres. The key here is that the orchestra is not just a backup band, but functions as an integral part of the music-making; it’s so important that the talent and scope of the orchestra are fully utilized. I think of artists like Ben Folds and Sting, whose orchestra shows are true reimaginings of their music—a coming-together of different musical approaches that creates something new and thrilling. I firmly believe “pops” (which I find such an awkward term) is a significant part of the offerings of any orchestra—it helps reach more of the community and allows for an expansion in the creative reach of an orchestra. —Sarah Hicks, principal conductor of the Minnesota Orchestra’s Live at Orchestra Hall series My simplest answer as to why pops matters is because it’s fun! When a pops concert is executed at a very high level of artistic integrity, it brings great joy to our audiences and, hopefully, to our musicians as well. The key is to do it to the best of your ability, from creating or discovering great arrangements to hiring guest artists who are worthy of sharing the stage with the orchestra. The sound from a full orchestra is unparalleled. We can bring film scores to life, perform Broadway selections in all of their

More than ever, what we call “pops” at orchestras throughout North America is a living, breathing entity that is constantly evolving to keep pace with a public that has unending options for entertainment. The musical worlds of Hollywood, Broadway, pop music, and the Great American Songbook collide so beautifully with an orchestra that the real challenge is how to program this vast repertoire. I constantly hear from audiences that, even with a star performer gracing the stage, they also want to hear “their orchestra” play on its own. This is a wonderful thing in this day and age! I am very pleased to observe the dedication of musicians everywhere to this repertoire. This was not previously the case. The facet of an orchestra known as “pops” will continue to endure, reinvent, and enhance the musical health and audience enthusiasm for symphony orchestras. —Jack Everly, principal pops conductor of the Baltimore Symphony Orchestra, Indianapolis Symphony Orchestra, Naples Philharmonic Orchestra, National Arts Centre Orchestra, and the Symphonic Pops Consortium

For me pops is the embodiment of the American musical ethos. Think about all the music on a pops program. Broadway: musical theater is an American institution. Jazz: that’s an American art form. Rock and roll started here. Bluegrass, country— all these musical styles are as American as apple pie. Orchestras are expressing that American musical experience bathed in orchestral sound. That’s particularly the case here in Cincinnati, in the middle of the heartland. The riverboats that came from the Appalachians with coal to fuel the Industrial Revolution also brought Celtic and Irish music traditions that blossomed into bluegrass and country. Those same riverboats brought consumer goods from the Deep South, but they also brought blues and jazz. We are blessed that so many orchestra musicians today have experience in pop repertoire as well as classical repertoire. It used to be that only a handful could really swing. But to play swing or in contemporary styles or big band or funk, these are all styles that contemporary musicians are able to perform. The fact of the matter is, from “Beautiful Dreamer” to “Birdland,” this is our music. —John Morris Russell, conductor of the Cincinnati Pops symphony