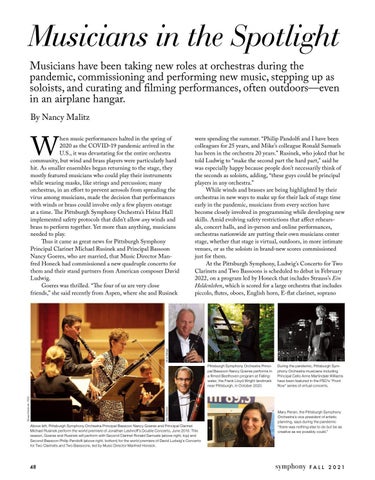 Musicians in the Spotlight Musicians have been taking new roles at orchestras during the pandemic, commissioning and performing new music, stepping up as soloists, and curating and filming performances, often outdoors—even in an airplane hangar. By Nancy Malitz

were spending the summer. “Philip Pandolfi and I have been colleagues for 25 years, and Mike’s colleague Ronald Samuels has been in the orchestra 20 years.” Rusinek, who joked that he told Ludwig to “make the second part the hard part,” said he was especially happy because people don’t necessarily think of the seconds as soloists, adding, “these guys could be principal players in any orchestra.” While winds and brasses are being highlighted by their orchestras in new ways to make up for their lack of stage time early in the pandemic, musicians from every section have become closely involved in programming while developing new skills. Amid evolving safety restrictions that affect rehearsals, concert halls, and in-person and online performances, orchestras nationwide are putting their own musicians center stage, whether that stage is virtual, outdoors, in more intimate venues, or as the soloists in brand-new scores commissioned just for them. At the Pittsburgh Symphony, Ludwig’s Concerto for Two Clarinets and Two Bassoons is scheduled to debut in February 2022, on a program led by Honeck that includes Strauss’s Ein Heldenleben, which is scored for a large orchestra that includes piccolo, flutes, oboes, English horn, E-flat clarinet, soprano

hen music performances halted in the spring of 2020 as the COVID-19 pandemic arrived in the U.S., it was devastating for the entire orchestra community, but wind and brass players were particularly hard hit. As smaller ensembles began returning to the stage, they mostly featured musicians who could play their instruments while wearing masks, like strings and percussion; many orchestras, in an effort to prevent aerosols from spreading the virus among musicians, made the decision that performances with winds or brass could involve only a few players onstage at a time. The Pittsburgh Symphony Orchestra’s Heinz Hall implemented safety protocols that didn’t allow any winds and brass to perform together. Yet more than anything, musicians needed to play. Thus it came as great news for Pittsburgh Symphony Principal Clarinet Michael Rusinek and Principal Bassoon Nancy Goeres, who are married, that Music Director Manfred Honeck had commissioned a new quadruple concerto for them and their stand partners from American composer David Ludwig. Goeres was thrilled. “The four of us are very close friends,” she said recently from Aspen, where she and Rusinek

During the pandemic, Pittsburgh Symphony Orchestra musicians including Principal Cello Anne Martindale Williams have been featured in the PSO’s “Front Row” series of virtual concerts.

Mary Persin, the Pittsburgh Symphony Orchestra’s vice president of artistic planning, says during the pandemic “there was nothing else to do but be as creative as we possibly could.”