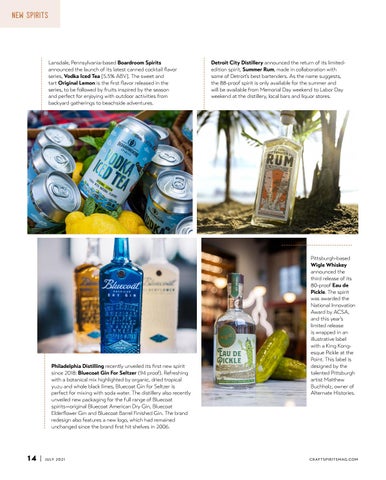 Lansdale, Pennsylvania-based Boardroom Spirits announced the launch of its latest canned cocktail flavor series, Vodka Iced Tea [5.5% ABV]. The sweet and tart Original Lemon is the first flavor released in the series, to be followed by fruits inspired by the season and perfect for enjoying with outdoor activities from backyard gatherings to beachside adventures.

Detroit City Distillery announced the return of its limitededition spirit, Summer Rum, made in collaboration with some of Detroit’s best bartenders. As the name suggests, the 88-proof spirit is only available for the summer and will be available from Memorial Day weekend to Labor Day weekend at the distillery, local bars and liquor stores.

Pittsburgh-based Wigle Whiskey announced the third release of its 80-proof Eau de Pickle. The spirit was awarded the National Innovation Award by ACSA, and this year’s limited release is wrapped in an illustrative label with a King Kongesque Pickle at the Point. This label is designed by the talented Pittsburgh artist Matthew Buchholz, owner of Alternate Histories.