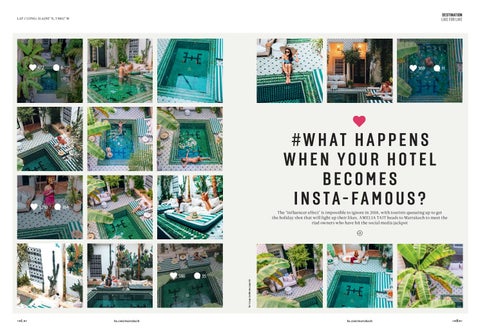 The ‘influencer effect’ is impossible to ignore in 2018, with tourists queueing up to get the holiday shot that will light up their likes. AMELIA TAIT heads to Marrakech to meet the riad owners who have hit the social media jackpot

STRANGERS KNOCK ON THE DOOR TO GET THEIR PICTURE TAKEN BY THE POOL. THE OWNER HAS HAD TO START TURNING THEM AWAY BEARING FRUIT This poolside picture by Kristi Hemric (@khemric, 21.2k Instagram followers) has nearly 1,700 likes

paying guests to be bombarded with a constant stream of photographers. Room prices vary from £84 to £132 a night, and it costs £800 a night to rent the entire riad. And yet it wasn’t always this way. Le Riad Yasmine is owned by Gabriel’s father and opened in 2002; Gabriel and Alice began managing the hotel in November 2015. “At the beginning, we had no guests at all,” says Alice. “It was really quite quiet. Then on 14 July 2016, Jack Morris – an Instagrammer with 2.8 million followers – posted a picture of himself and his girlfriend eating breakfast by the pool. It was liked more than 104,000 times. His girlfriend, Lauren Bullen, posted the same picture to her two million followers the next day, gaining a further 110,000 likes. The riad’s own Instagram page earned 10,000 followers in a single day. “After that, everyone wanted the same picture,” Alice says. Professional Instagrammers are often called ‘influencers’ because they literally influence the public’s decisions. “It was like do, doo, doop, doop,” says Alice, imitating the sound of email alerts pinging on her phone after Morris and Bullen’s pictures. “I wasn’t sleeping,” she says, because people were constantly trying to book rooms. Beyond Le Riad Yasmine, Instagram has transformed tourism. The residents of the town of Giethoorn, Holland, are now learning Mandarin after Instagram posts attracted a constant flock of Chinese visitors, while Ovolo 1888 is a hotel in Sydney, Australia, that was specifically designed to appeal to social media stars.

he ora nge s at L e R i ad Ya sm i ne, Marrakech, are not oranges – they are props. Technically, of course, they’re real fruit – firm, sweet, and ready to peel – but the hotel’s guests are not interested in eating them. Instead, the oranges offer a pop of colour against the vibrant green tiles of the riad’s pool. They are easy to juggle. They allow visitors to make a quick “orange you glad to see me” pun. This matters because the Moroccan hotel boasts one of the most photographed swimming pools in the world. It is what’s known as ‘Insta-famous’ – hugely popular on the photo-sharing app Instagram. The hotel has been hashtagged around 5,300 times on the social network, and one picture of the pool, posted in October 2017, has more than 91,000 likes. In these circumstances, details – especially oranges – matter. “It’s always a photoshoot in here,” says 29-year-old Alice Paris, who manages the hotel with her husband Gabriel. She opens the app and thumbs through seemingly endless notifications. “It’s quite crazy.” We are sitting by the famous pool, which is remarkably small in real life. The air smells vaguely perfumed, but otherwise the still and silent room puts all other senses on pause. It is undeniably an aesthetic delight. Plants surround the water, and one wall is painted with a cactus mural. At the bottom of the pool are tiles in the shape of the Berber yaz (‘free man’) symbol. Alice’s cat, Bowie, lazes on a chaise longue. The deep green tiles are a perfect contrast to the orange-coloured streets of Marrakech. “Every time people ask me this question, I don’t really know…” Alice muses, when I ask what makes her pool one of the most Insta-famous locations in the world. She points to its position in the centre of the riad (a traditional Moroccan house), meaning guests can get the perfect overhead shot from the mezzanine above. “Maybe because it’s very photogenic and Instagrammable,” she theorises, stumbling over the made-up word. “Instagrammable: I think it will be in the dictionary soon.” Büşra Qadir, a 28-year-old with more than 17,400 followers, calls the pool ‘Instagrammable’, too. Qadir and her husband stayed at the hotel because shesaw photos of the pool online. “We instantly booked our stay,” she says. “I almost feel like that pool has now become a famous tourist site that you simply have to take a picture at.” She isn’t alone. “It was the pictures on Insta that made me visit,” says 31-year-old Alexander Albu, who has more than 6,000 followers. Tiffany De Smedt, a 25-year-old with 31,000 followers, says “of course it had an influence” on her visit. It is easy to see how the eight-room riad is permanently full (Albu booked his stay an entire year in advance). Strangers knock on the door to get their picture taken by the pool, and Alice has started turning them away. “It was happening too often,” she says. She believes it’s unfair for

POOL RESOURCES Tiffany De Smedt shared images of her stay with her 31,000 followers

At ‘1888’, there’s a real tree growing in the lobby, and there are also two screens showing a rolling feed of guests’ photographs. There is a ‘selfie space’ for tourists to take photos, and even a map of the most Instagrammable places nearby. Influencers with more than 10,000 followers are offered free rooms at the hotel. Alice, too, has caught on to this type of marketing – in the past she has invited internet personalities to visit and promote the riad. If this all sounds too good to be true, perhaps sometimes it is. In May 2017, Instagrammer Sara Melotti spoke out about the disturbing elements of Instagram fame. While visiting the Tegallalang rice terraces in Bali with other influencers, she was astounded when they decided to leave immediately after taking their photos. “That’s when I realised: ‘What are we doing?’” Melotti says. “I thought, why should we go? It’s a beautiful place, we just got here.” For now, however, Alice Paris sees no downside to Instagram fame. One influencer, Jessica Carpenter (16,600 followers), says that people have to wait their turn to get the perfect shot by Le Riad Yasmine’s pool. She took hers early in the morning. It was liked more than 1,000 times. Le Riad Yasmine’s staff don’t seem to mind these perpetual photoshoots, however. Grinning widely, Alice’s ‘right-hand

man’ Outmane walks by holding a traditional tea tray. “It’s because of my pictures people get famous,” he laughs. Most of the hotel’s eight staff have had their turn as photographer (Qadir says her photos were taken by the receptionist who happened to be walking past). “Sometimes people print pages of Instagram photos and say we want to do this, this and this,” Alice explains. “They ask questions, like where the picture was taken from, sometimes they ask for a basket of fruit so they can have the best pictures. It’s quite funny.” (For some, however, it isn’t a laugh. In November 2016, Bullen accused another Instagrammer, @diana_alexa, of copying her photograph by the pool. While it was dramatic for the social media community at the time, it’s ironic now. Every picture of the hotel’s pool is an imitation of the last.) Instagram has clearly improved the riad’s fortunes, but has the pool’s fame impacted the rest of Marrakech? “Anything I post with Marrakech in does really well,” says Kristi Hemric, an Instagrammer with 21.3k followers, “And places like Bali and Marrakech are Instagram gold.” Marrakech has always been exceptionally photogenic – its Majorelle Garden is full of bright tiles, exotic plants and cascading fountains – but Instagram has made it all even more appealing. The bustling public square, Jemaa el-Fnaa, was a photo hot spot long before social media, but the snake charmers, piles of fruit and stall lanterns are undeniably Instagram-friendly. More directly, Alice and Gabriel have partnered with a local brand, Original Marrakech, to embroider the hotel’s name on straw hats, which are strategically placed around the pool. This is a clever move for Instagram (now the comment section won’t be full of “Where is this?” queries), but it’s also great for the nearby business. Its customised items can be purchased from nearby Souk Cherifia. Soon there will be a Moroccan must-see even closer to the hotel. Alice and Gabriel are opening up Le Petit Yasmine – a three-room riad with a roof that touches on the original. “I like a challenge,” says Alice, who is renovating the building herself. And what will the pool be like? “It will be a surprise,” she laughs coyly. “It will be different.” There are no oranges by the pool when I visit Le Riad Yasmine – they’re out of season. Does this bother guests hoping to imitate the latest photo trend? As usual, Alice has a solution. “We’ll have watermelon soon,” she smiles. n Find out more about the riad at riad-yasmine.com

GOOD FOR ’GRAM Riad Yasmine isn’t the only location that’s become Insta-famous. For more feed-friendly locations, head to these spots

BEND OF THE WORLD

Paul Smith on Melrose Ave, LA, was Millennial pink before the phrase even existed. In recent years it’s become a selfie no-brainer.

Café du Monde in New Orleans is the most Instagrammed bakery in the USA and it’s down to its beignets – fabulous fried fritters.

Horseshoe Bend on the Colorado River in Arizona went from 4,000 yearly visitors to 1,000 a day in just five years, thanks to social media. 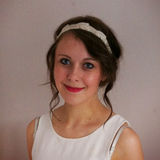