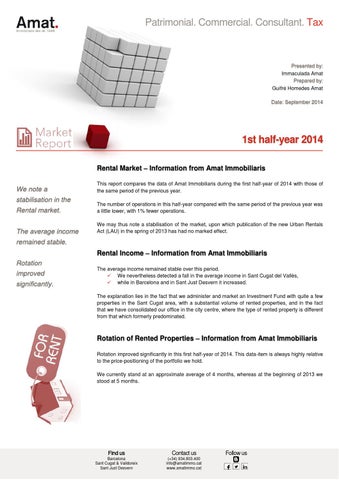 This report compares the data of Amat Immobiliaris during the first half-year of 2014 with those of the same period of the previous year.

The number of operations in this half-year compared with the same period of the previous year was a little lower, with 1% fewer operations.

We may thus note a stabilisation of the market, upon which publication of the new Urban Rentals Act (LAU) in the spring of 2013 has had no marked effect.

The average income remained stable over this period.  We nevertheless detected a fall in the average income in Sant Cugat del Vallès,  while in Barcelona and in Sant Just Desvern it increased. The explanation lies in the fact that we administer and market an Investment Fund with quite a few properties in the Sant Cugat area, with a substantial volume of rented properties, and in the fact that we have consolidated our office in the city centre, where the type of rented property is different from that which formerly predominated.

Rotation of Rented Properties – Information from Amat Immobiliaris Rotation improved significantly in this first half-year of 2014. This data-item is always highly relative to the price-positioning of the portfolio we hold. We currently stand at an approximate average of 4 months, whereas at the beginning of 2013 we stood at 5 months.

Sales Market – Information from Amat Immobiliaris For another halfyear, we find that the sales market has shown an increase in

The total value of the properties sold also rose, though to a lesser extent than the number of operations, at 60% up on the same period of the previous year.

stabilised, and seem to be moving upwards in areas that are beginning to lack newly built

The impact sale price evolved differently in each area:  In the residential area around Barcelona city (Sant Cugat del Vallès, Sant Just Desvern, Esplugues de Llobregat, etc.) it remained stable. The fluctuation was less than 1% upwards or downwards, depending on the town.  In the city of Barcelona there were different variations depending on the neighbourhoods:

properties.  Diagonal Mar: last year, we still held a significant stock of newly constructed flats in the area. That situation no longer held this year, such that only with second-hand stock and with high demand we had an increase of over 5% in the mean impact of the sales made in the area.  Sant Gervasi: if we take no account of the status of the property (new or second-hand) we do see an increase, for this year we have sold more new properties in the area. If, on the other hand, we do take account of status, the fluctuation was approximately 2%.  Les Corts and Eixample: there was an upward trend of a little over 2%. In summary, the average price of the sale operations remained stable overall, although in Barcelona city it rose a little, while in the residential hinterland it fell by a similar percentage.

Rotation of Properties for Sale – Information from Amat Immobiliaris The average rotation remained stable at approximately 7 months, as in the first half-year of 2013. This period is clearly highly related to the price of the properties and to the substantial difficulties involved in the price repositioning of new properties (sales of which have been reaching completion over these last two years), strongly influencing the calculation of rotation.

Types of Properties for Sale – Information from Amat Immobiliaris Of the total sales made in this period,

Of the total sales made in this period, 51% were of newly built properties. 

In areas such as Sant Just Desvern and Esplugues de Llobregat, we had sold practically no new properties due to lack of stock; in this first half-year of 2014, however, we have managed to sell many of the new properties that had been taken into our portfolio.

In the city of Barcelona, and despite the fact that the stock of new properties is not abundant, over 70% of the operations in this first half-year of 2014 were of new properties. As we said of 2013, in Barcelona city the foreign buyer market is very active, and those buyers generally accord priority to new property.

51% were of newly built properties.

There is a return of operations in middle price ranges, which had disappeared for 5 years. We also again

We should stress that we have observed a rise in the volume of operations in the middle price range (between €450,000 and €750,000) for second-hand properties, a segment that had practically disappeared for over 5 years. We might also note that this half-year brought operations of other kinds, such as sales of sites, commercial premises and substantial batches of car parks.

concluded operations of other kinds, such as sites, commercial

premises, etc. In Barcelona city nearly 50% of our sales were to overseas buyers. Only 51% of the operations were financed.

Profile of Purchasing Clients – Information from Amat Immobiliaris There persists a trend similar to that of the previous year. In relation to the first half-year of the previous year, there was a 4% rise in sales to overseas purchasers. In Barcelona city they accounted for nearly 50% of our sales. Little by little, we have been concluding increased operations in the more residential area of Barcelona’s hinterland. In many cases, foreign buyers were attracted to them by the international schools in those areas, seen as desirable for their children’s education. If we segment the operations by price, we may note that, in the property price range below €500,000, 91% of buyers were in the domestic market. The overseas buyer market is still dominated by buyers from Russia and surrounding countries, very closely followed by North African buyers (basically from Egypt). Other buyers were from China, Venezuela, Belgium, France and the UK. The typical purchaser is:  family of middle-upper socioeconomic status  aged between 40 and 50 years  with children  professionally well-positioned (managers, business people or liberal professionals). Only 51% of the operations were financed.

Marketing Day by day, we improve our knowledge, we learn

Celebratory event for the 65th anniversary of the company. Drawing up the Annual Report for 2013. The Chamber of Commerce awarded us the prize for Best Business Career First video of a property taken from a Drone. Conference for clients at the Mediolanum Bank.

and we put into practice new

We continue strengthening our international relations with active participations at different fairs,congresses and meetings with real estate agents from all around.  Participation at the Luxury Real Estate Conference in Monte Carlo.  Sales trip to Russia.  Exhibition at the Luxury Property Showcase trade fair in Beijing.  New member of Mayfair International.

By maintaining, strengthening and expanding these relationships, we can: Extend the possibility of bringing in clients for the properties we market, and be reference agents in Barcelona for many other estate agencies around the world.

We analyze the situation the real estate market: 1st semester 2014 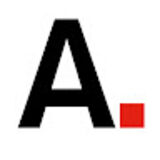