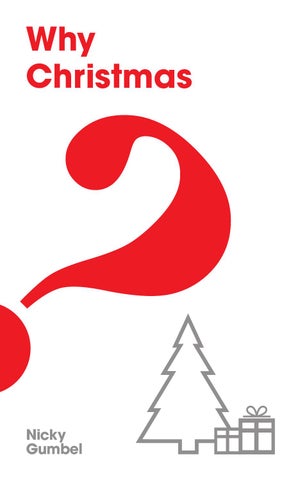 The Christmas edition of Why Jesus?

Published in North America by Alpha North America 2275 Half Day Road, Suite 185, Deerfield, IL 60015 © 2008 by Nicky Gumbel This edition issued by special arrangement with Alpha International, Holy Trinity Brompton, Brompton Road, London SW7 1JA, UK Why Christmas? by Nicky Gumbel All rights reserved in North America. No part of this publication may be reproduced or transmitted in any form or by any means, electronic or mechanical, including photocopy, recording, or any information storage and retrieval system, without permission in writing from the publishers. Originally published by Kingsway Publications Ltd, Lottbridge Drove, Eastbourne, East Sussex, England BN23 6NT First printed by Alpha North America in 2001 Printed in the United States of America Scripture in this publication is from the Holy Bible, New International Version (NIV), Copyright 1973, 1978, 1984 International Bible Society, used by permission of Zondervan. All rights reserved. Illustrations by Charlie Mackesy ISBN 978-1-931808-10-1 11 12 13 14 15 Printing/Year 17 16 15 14

WHY CELEBRATE CHRISTMAS? There is something almost magical about Christmas: children dream of Santa Claus and his fantasy sleigh, we picture Christmas trees, snowy scenes, filledup stockings, piles of presents, and smiling families around the fire. The reality is often not as perfect as we imagine. Some people go over the top at Christmas. The overcrowding on the streets and in the shops can lead to so-called “SantaClaustrophobia.” Over-indulging takes its toll on family life. One nine-year-old boy wrote, “I know Christmas should be a religious time, but to me Christmas is a time for the necessities of life such as food, presents, and booze.” Another boy wrote, “After breakfast we go into the sitting room. Dad comes in drunk with Mom’s tights and an Indian hat on!” His teacher wrote in the margin, “Good old Dad!” For some there is a danger of overspending— buying presents that others do not need with money they do not have. 3

One little girl wrote to her grandmother, “Thank you very much for the nice gloves you sent me for Christmas. They were something I wanted—but not very much!” Others can become overdemanding. One doting father asked his small daughter well in advance what she would like for Christmas. Shyly she announced she would like a baby brother. To everyone’s surprise and delight her mother returned from the hospital on Christmas Eve with a baby boy in her arms. When the father repeated the question next year, there was less hesitation. “If it wouldn’t be too uncomfortable for Mommy, I would like a pony!” But while some go over the top, others go under. For many, Christmas is one of the worst times of the year. Suicide rates go up, more people die from “natural causes,” marriages fall apart, psychiatrists’ patients suffer regressions, and family feuds begin. One Mori poll suggested that there are three million family arguments each Christmas. A newspaper article headlined, “Enough to Drive You Crackers,” spoke of people cracking up at Christmas as a result of the pressure to be perfect. It reported 4

that two psychologists, a psychotherapist, and a counselor were running a workshop entitled “Stress in the Family: Coping with Christmas.” They said that part of its success seemed to be the chance it offered to get away from it all. The psychiatrist Anthony Storr in an article on depression at Christmas entitled, “Cheer Up, It’s Soon Over,” had this final piece of advice: “Remember that Christmas, although recurrent, doesn’t last forever.” With all the magic, the stress, and the hype of Christmas, are we missing the point? What is at the heart of Christmas? In the words of C. S. Lewis, at Christmas we remember the “central event in the history of the earth—the very thing the whole story has been about.”

WHY BOTHER WITH JESUS? When Jesus was born, a group of highly intelligent philosophers thought He was worth bothering with. They stopped everything to take Him three symbolic presents. The first was gold—a present fit for a king. The child in the manger was the King of kings and Lord of lords. God Himself had come to live as part of our world. Too often Jesus has been obscured by Christmas. One man wrote to The Times: 5

“Sir: Failing to find any religious books in the bookshop, I asked an assistant for help. She showed me an inconspicuous handful of Bibles and prayer books, saying: ‘We have had to move them down to the bottom shelf because of Christmas.’” But the point of Christmas is Jesus Christ. At Christmas we celebrate the birthday of the most important Person who has ever lived. He is the centerpiece of our civilization. After all, we call what happened before His birth B.C. and what happened after A.D.!

But how do we know it’s true? We can test the claims of Christianity because it is a historical faith. It is based on the life, death, and resurrection of Jesus Christ. Our faith is based on firm historical evidence.

Who is Jesus? Jesus was and is the Son of God. Some people think He is just a “good religious teacher.” However, that suggestion does not fit with the facts. 6

His claims Jesus claimed to be the unique Son of God on an equal footing with God. He assumed the authority to forgive sins. He said that one day He would judge the world, and that what would matter then would be how we had responded to Him in this life. C. S. Lewis pointed out, “A man who was merely a man and said the sort of things Jesus said wouldn’t be a great moral teacher.” He would either be insane or else He would be “the Devil of Hell.” “You must make your choice,” he writes. Either Jesus was, and is, the Son of God, or else He was insane or evil but, C. S. Lewis goes on, “let us not come up with any patronizing nonsense about Him being a great human teacher. He has not left that open to us. He did not intend to.” His character Many people who do not profess to be Christians regard Jesus as the supreme example of a selfless life. The Russian author Fyodor Dostoevsky, himself a Christian, said, “I believe there is no one lovelier, deeper, more sympathetic, and more perfect than Jesus. I say to myself, with jealous love, that not only is there no one else like him but there could never be anyone like him.” As far as Jesus’ teaching is concerned, there seems to be a general agreement that it is the 7

purest and best ever to have fallen from the lips of man. As C. S. Lewis put it, “It seems obvious that he was neither a lunatic nor fiend; and consequently, however strange or terrifying or unlikely it may seem, I have to accept the view that he was and is God. God has landed on this enemy-occupied world in human form.” His conquest of death The evidence for the physical resurrection is very strong indeed. When the disciples went to the tomb, they found the grave clothes had collapsed and Jesus’ body was gone. In the next six weeks He was seen by over 500 people. The disciples’ lives were transformed, and the Christian church was born and grew at a dynamic rate. A former Lord Chief Justice of England, Lord Darling, said of the resurrection: “In its favor as living truth there exists such overwhelming evidence, positive and negative, factual and circumstantial, that no intelligent jury in the world could fail to bring in a verdict that the Resurrection story is true.” The only satisfactory explanation for 8

Why Christmas Many people today are puzzled about Jesus. Why is there so much interest in a person born 2,000 years ago? Why are so many people excited about Jesus? Why do we need him? Why did he come? Why did he die? Why should anyone bother to find out? “The clearest, best illustrated and most challenging short presentation of Jesus that I know.” Michael Green

Nicky Gumbel is the pioneer of Alpha. He read law at Cambridge and theology at Oxford, practiced as a lawyer and is now senior pastor of HTB in London. He is the author of many bestselling books about the Christian faith, including Questions of Life, The Jesus Lifestyle, Searching Issues, and 30 Days. Follow Nicky @nickygumbel.

A booklet with a brief explination why Christians celebrate Christmas. 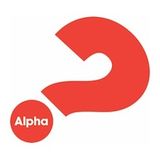