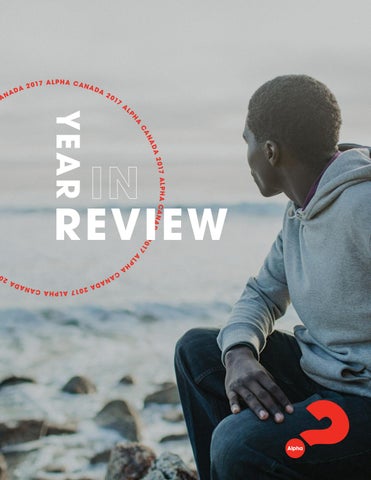 MES SAGE S HAIL A As I look back on 2017, I am both humbled and thrilled with what God has done through the staff, board, volunteers and Alpha partners. Thank you. In our vision to serve the local church, we engage with the full

spectrum of church traditions. As they continue to engage their communities, we have seen a historic number of 5,000 Alphas, over 109,000 guests and 41,000+ volunteers. Praise God!

Alphas rather than the number of churches and courses. What a

delight to see that as we went deep with individual churches, God brought the increase in other areas.

We strategically looked at ways we trained the church, which included radical hospitality, invitational culture, the Alpha

Weekend, and the Healing Night. Our survey data identified growth in all areas except the Alpha Weekend which takes more time, energy, and cost but provides the greatest impact. This is an

ongoing challenge that we are addressing through modelling the weekend and continuing to raise awareness to the church of the transformational value it can have on their guests.

was funded by our Canadian partners, rolled out globally through the fall and continues to be translated for other National Alpha

Offices. We are amazed at the number of Alphas that have started in such a short period of time. It continues to perplex me why we

have difficulty funding this remarkable area of the organization on a consistent basis.

capabilities, a digital training centre, and host/helper features. We also partnered with Malaysia, USA, Australia, and the UK to roll it out for other Alpha offices.

French Resources In 2017, we launched the Alpha Film

French speakers. This led to the increase of our French Alphas by 251% across the country, particularly in Quebec.

New Funding Strategy Sally Startâ&#x20AC;&#x2122;s retirement at the end of

2016 gave us the opportunity to rethink our funding strategy. I took on a larger responsibility and we hired a part-

time consultant with over 25 years of

philanthropy experience. By September, we transferred another person to this

VI S ION At Alpha Canada, our vision is the evangelization of Canada resulting in the transformation of the nation.

someone within Alpha Canada. We set ourselves a goal of increasing revenue

significantly and by the grace of God we were able to achieve our goals.

In 2018 we anticipate new challenges in

fund development. With our philanthropy consultant and new Alpha Ambassador,

we anticipate a greater balance between my time and the others by Q4 2018.

of this evaluation was to consider a new

central workplace that allows for greener options and reduced commute time. We

MI S S ION Our mission is to inspire and serve the Canadian Church in its mission to help people discover a relationship with Jesus Christ using Alpha.

are blessed to have a new office space in New Westminster, BC.

We are so grateful to the church who

opens the door to us to serve them, for

the tireless volunteers and for the faithful

partners who make this a financially-viable mission.

It is our joy to do this work and we hope

this report gives you a small taste of the amazing blessing it is to be part of the Alpha family in Canada. With thanks,

NUMBERS The greatest impact in our history

guests began or restored a relationship with Jesus

â&#x20AC;&#x153;Alpha engages people in a language they can understand with human hospitality and warmth, with truth explained in a rational and winning way, and with discussions that allow them to dialogue, process their own experience, and learn from others.â&#x20AC;?

Born and raised in Iran, Yasi was Muslim by tradition. A friend invited Yasi to go to church with her while she was studying abroad. She was becoming curious about Christianity and decided to say yes to her invitation.

“I enjoyed the talks and the small group

“My friend was a perfect example of

Yasi. After a few weeks, she started

family let me stay in their house when

her parents had improved. She also

discussions and my group hosts were so nice,” she says.

It was at that same time that Yasi’s life was at its most fragile.

“My anxiety and depression were taking over my life and my relationship with my family was very fragile,” she recalls. “I found myself at my lowest point. I felt hopeless. I was ready to accept Jesus in my life. The next day at Alpha, they asked if anyone wanted to pray to receive Jesus and I did.” Things started to change at home for

kindness and love for me,” she says. “Her

realizing how much her relationship with

I had no place to stay and not much

found a new sense of joy and peace.

there was something there that made me

“I could really relate to what they [at

money. When I started going to church, feel good, so I kept going every week.”

Alpha] were talking about when they said

Then, Yasi moved to Montreal and

you. He is really the missing part,” she

gave her the space and time she needed

stay connected to God’s words and to his

running Alpha so she decided to attend.

anchor and my hope.”

Jesus will fill the empty space inside of

connected with a church community that

says. “I realized how important it is to

to explore faith and God. They were

people. Struggles will come but he is my

helped encourage church communities to invite and guests to attend an Alpha nearby.

With Toronto being the fourth largest city in North America and one of the most multicultural, we are thrilled at the impact of this initiative as

churches in the GTA and across Ontario worked together to invite their cities to explore faith and connect with a church community.

“I loved the collective impact of this campaign. We had over 100 Alphas happening all over the city and a lot of churches had a sense that we were all doing something together. It gave great energy and cohesion to churches, so I think that was a really big win for our church and for our city.” Rob Hogendoorn, Senior Pastor at Forest City Community Church, London, ON 6

How did running Alpha and participating in the Global Alpha Campaign impact your church and the people involved? It exceeded my expectations to be honest.

I was shocked at how many people showed up, how many volunteers were there, how

many people were engaged, the buzz in the room. These were new people engaging

in a faith journey; it doesn’t get any better

It gave our people confidence. They get to

lead something. They get a taste of what it

What is your vision for evangelism in your church community? We organize around these three terms:

but power under people, and all of a

sudden people engage in other areas in the church to serve.

What is your hope for the GTA moving forward?

It’s not hard to say that I love this city.

Probably the best and first question at

have is knowing Christ; wouldn’t we want

every board meeting and on every agenda should be: How is this church helping me reach my unsaved friend? People’s idea

means to serve and not power over people,

My hope for the GTA is transformation, generational groups, would find a

commonality in their Creator Jesus.

of what church should be would look less

I just think the Gospel can penetrate

hardest of communities. I love this city, and

partner with to see our friends and family come to Christ.

the hardest of hearts, can penetrate the

I’d love to see it transformed by the Gospel of Jesus.

all around the world.

E M P OWE R I N G S TU D E NT S Over the last two years, we’ve been working to provide youth leaders with support and resources as they empower students to run Alpha for their friends.

what God will do through these students as they step out and invite their friends to explore faith and God on Alpha.

“I enjoyed the fact that all of my peers around me felt comfortable expressing their opinions during Alpha. It was like walking down the beach and sincerely talking about anything we believed in without any sense of discomfort or embarrassment.” Grade 10 Student, Montreal QC 8

Paris, Israel, and many other incredible locations. It

The new series was filmed in Vancouver, London, Rome,

The Alpha Youth Series is an updated, interactive series that helps equip local churches, youth ministries, youth pastors and students in their mission to reach young people with the Gospel.

Alphas run using the new series in 447 churches and orgs

guests began or restored a relationship with Jesus

In October 2017, we launched the new Alpha Youth Series in partnership with Alpha International.

“If we continue to see the kind of growth that we’ve been seeing as we released the first Alpha Youth Film Series, I think the result will be millions of young people around the world having the opportunity to experience the love of community and the love of Jesus. I think that can change the world. The dream is seeing a whole generation changed.” Jason Ballard, Alpha Youth Series Host & Executive Producer 2017 Annual Report

Serving and Training Leaders across Canada Alpha Builder launched in May 2016, enabling leaders to easily plan their Alphas and access the episodes, invitational resources and

training material. Throughout 2017 it was updated with a simpler-

to-navigate user interface and new features, including the ability to invite hosts, helpers and volunteers to view a weekly schedule and training resources.

“I’m just wrapping up my first time as a host/leader for Alpha at my church. It has been one of the most incredibly rewarding and fulfilling experiences of my life! I’ve been asked to help out again and I’m already counting down the days.” - Jason, Alpha Host, Peterborough, ON

Fundraising 3.95% Events 0.38% * The following designated development projects are offset by accumulated funds raised in the current and previous years through restricted fund accounts.

This is a pivotal moment in our history as we work to inspire and serve the Canadian Church in its mission to help more people than ever discover a relationship with Jesus. We are extremely grateful for your generosity and prayers as we embark on this journey together. 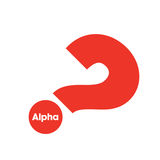