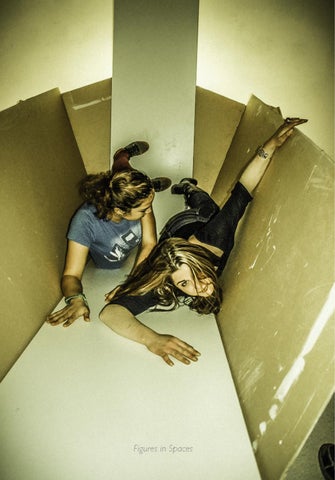 Figures in Spaces Audrey Guiraud, Jaimie Henthorn, Sara Ocklind, Robert Robertson, David Rohr, Keef Winter, Justyna Ziolkowska TENT GALLERY EVOLUTION HOUSE 78 WEST PORT 18.02.13 - 23.02.13 Figures in Spaces moves into the city, acknowledging and representing eccentric city spaces with the presence of the figure re-addressed. With the aim to return the human figure to the process of approaching and presenting spatial ideas, Edinburgh was explored by streetwalking in the day and at night. Emphasis was placed on discovering overtly ‘Apollonian’ capitalist-driven spaces; shiny, privatised and corporate in feel; or spaces that are ‘Dionysian’ in their properties; unique, dark and more affording of an unseen act. Current movement, choreographic and performance art techniques informed the integration of the figure into these city spaces. Installation, performance, demolition and text follows in this Allotrope Edition, aiming to represent and sustain our outcomes.

Cover &amp; Back: Image of participants inside ‘Altar’ 2013

Light and dark drives from the city Master and Slave, Apollo and Dionysus, Sterile and Dissonant - these light and dark drives exist in all of us. We are continually torn in the tension between indulging our Dionysian urges and maintaining order in the shimmering reverie of Apollo. The representation of these drives is embedded in the city spaces around us, by us. Man etches his story on to the material that encloses him. This material, in turn, feeds a story back. Spaces whisper in our ears and signal to our eyes. If tuned in, the objects of art created in the images of these spaces can relay a deeper message to those who can listen and those who can see. To begin with, we expose the inner workings beneath the visible surface. We prise off the mirrored glass to reveal what is behind it. We build from what we can remember, post and lintel. Formal structures are broken down and reworked. Friedrich Nietzsche’s expansions of the worlds of Apollo and Dionysus help us to see city space as a representation of man’s everyday vernacular. ‘Figures in Spaces’ attempts to create a condensed application of these worlds, inspired and extracted from particularly ‘sterile’ and ‘dissonant’ spaces found in Edinburgh. The world of Apollo establishes order. It feeds us a sense of meaning as individuals and propagates Schopenhauer’s idea that we see ‘empirically distinct objects’ around us. This, Nietzsche tells us, is an illusion to mask our inevitable fate. The world of Dionysus reminds us of what it is to be human, to indulge in the excesses of the flesh, to desire, and to abandon control in an orgiastic primal sense of collective. Nietzsche tells us that at times it is necessary to dip into the energy of Dionysus to return refreshed to the world of Apollo, to understand why we require order over chaos. However, if we stay too long in the world of Dionysus it will destroy us. To establish a polarisation in city spaces we can turn to Hegel’s ‘Master/Slave Dialectic’ written in his 1807 work ‘Phenomenology of Spirit’. We can link Nietzsche’s light and dark drives of Apollo and Dionysus to the conflicts between ‘extreme things’ when they decide to ‘acknowledge’ one another. In this process of ‘acknowledgement’ a construct is setup called the ‘middle term’. It is possible to see this ‘middle term’ as a space for potential when two extreme things strive for ‘self-consciousness’. Hegel tells us that self-consciousness, reached for in the process of acknowledgement, is a conflict to the death, and will always lead to an outcome of one party becoming the Master and the other becoming the Slave. However, he tells us that in his duty, the Slave has the potential to see ‘otherness’, not the ‘monstrous female other’ as is so often alluded to, but rather ‘otherness’ as an alternative existence, essentially optimistic. The Slave is aware of his(/her)

position in the relationship and dreams of something more while the Master sleeps. The role of the Slave forms the basis for the true artist; a position of artistic production that does not aim to have beauty and resolution as a destination but rather to transform one’s own self, to reach for the ‘other’. This transformation, Nietzsche tells us, allows the production of artworks to spill out in an epiphenomenal process, not being the primary aim but rather occurring as a by-product of a higher process. In this sense then the artist holds an advantage as an underdog, the unseen walker, the quiet producer - one who makes not for the glory but because of a ‘necessity to build’. ‘Figures in Spaces’ aims to take this acknowledgement between these light and dark drives and apply it to a ‘pop-up collective’. One that searches to acknowledge polarised spaces in the city. To regard a polarised space as an extreme thing. To regard space as consciousness and tussle with it to reach some form of outcome. In the Tent Gallery where this exercise manifested itself, we tussled between types of space, now representations as photographs, models and ideas. We filled a space with material and began to strip away the excess. Without implementing explicit strategies we held off from knowing ‘what it will look like’. I would go as far as to say we banished ‘big ideas’. Over the intense hours spent staring at each other and shrugging our shoulders with a crate on our back or a screwgun by our side, a process occurred. In the movement of material and during the middle-terms setup between individuals in the group we began to shape a gallery exhibition. It was complex, like Henri Le Febvre talks about in ‘The Production of Space’ ‘forces intertwined and overlapped’ and something new took form. We imitated a few spaces, or by this point, through abstraction, a few ideas. What happens when the body is turned 90o? What happens when a collective public decide to treat the embodied energy of an art object seriously and interact with it? What happens when there’s the suggestion of self-transformation in a space mixed with alcohol? The outcome resulted in four works shown in the gallery space (each overlapping with its neighbour); an altar, a corridor and platform, a series of shuttered blinds and a sound piece. One entered a corridor that closed in as one stepped up to a height. From an elevated position one could look down on the ‘altar’, examining the vulnerability of the occupant, stretched out and entranced. The sound of Robert Robertson’s voice tinkled from an overhead speaker fused with some lounge music, just enough to be heard. The oversized blinds shuttered car lights on the rear wall like a Hitchcock sound -stage. This space afforded an experience beyond viewing. keef winter

add something by taking away

Stimulation/simulation One cannot deny a certain majestic and wowing effect to clean and pure lines, bold and big designs. Move around the Guggenheim Museum, the new Scottish parliament, Hadid’s or Future System’s design, and the strength of their composition, the rigour of their detail and their flawless execution will affect you. I can’t help to think that the fact that our world is currently over saturated in stimulation is a big part of the answer to the question “ why is minimal so popular right now?”. It’s almost like our minds are desperately looking for a peaceful place to rest. But nothing is completely one-sided and as much as I respect aiming for pure design and committing to an idea, I am also forced to see that purity comes with the risk of monolithism; a monolithism with the risk of deficiency. As with anything pure comes the danger of indigestion, too much, too strong, too saturated in one element. This element today is abstraction. The first symptoms manifest themselves: I witness birth of hate within my initial love for the style. The aversion feels so fresh and new that it naturally takes precedence over the appreciation and flips my point of view right along with it. Clean becomes sterile, strong becomes offensively annoying and purity becomes poison. A craving for anything figurative arises, and I look for it anywhere I can, like a junky in withdrawal. Where is the grittiness, where is the personal input and perspective, where is the humanity? If we keep designing like machines, there will be no surprise in the robotisation of creation and we will lose our souls in the singularity. Having spent much time stretching Darwinism here and there, I came to see humanity as a cellular tissue. As our cell count keeps on growing alarmingly, the organism’s pressure for homogeneity becomes greater on every cell. They conform or confess, and trends become religions. As being a cell myself, I refuse to be part of the whole and will encourage anyone to break free just, at least, for the sake of it. Be dirty, be gritty, be proud. Be the cancer. DAVID ROHR

Start of two-hour city tour by ‘gentleman flaneur’ and urban expert Robert Robertson, Rutland Square, Edinburgh, 20 February, 2013 The railway went bust three times between 1800 and 1840. And you can actually tell where it runs out when it goes bust because of the hole, because there were economic crises. But by the late 1840s it was a place where no one wanted to live because from here all the way to where the Filmhouse is on Lothian Road, was railway line. From 1848, there was a railway station. What’s now the Caledonian Hotel was the hotel for the railway station. I mean as a child this was, there were two big stations over this way. As a result of the Beeching cuts to the railways, they got rid of this one. But from the 1840s this isn’t, wasn’t a place you’d wanted to live. Because none of you will remember steam, oh you will have seen steam engines, but seeing steam engines as serious mode of hauling trains, absolutely filthy. I mean black smut over all the property round about, so it blighted this area of Edinburgh. And so from the 1840s to the 1960s, this area was blighted by the railway. The same is true in London. How well do any of you know bits of North London? There’s Primrose Hill, which is now an incredibly desirable area for living. Up until the 1960s nobody would live there because the railway lines coming up from Euston, there’s a big cut in, where the Roundhouse is, where they do productions and all that now, that Roundhouse was built as a railway engine house. It was made redundant very quickly because the engines got bigger, and then it became a potato store for (snap, snap) one of the gin distillers. But up until the 1960s, because you’re hauling an express train out of Euston, the regulator, I mean the way steam engines work is that it’s a full stroke boiler, so it’s chucking lots of stuff out the chimney when you’re working the power. So that got filthy. And there are quite a lot of sort of towns in Europe where, if you plot where the railway was, until the 1960s when diesel trains or electric trains came in, you get the like. ROBERT ROBERTSON 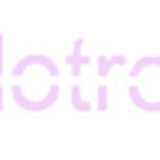